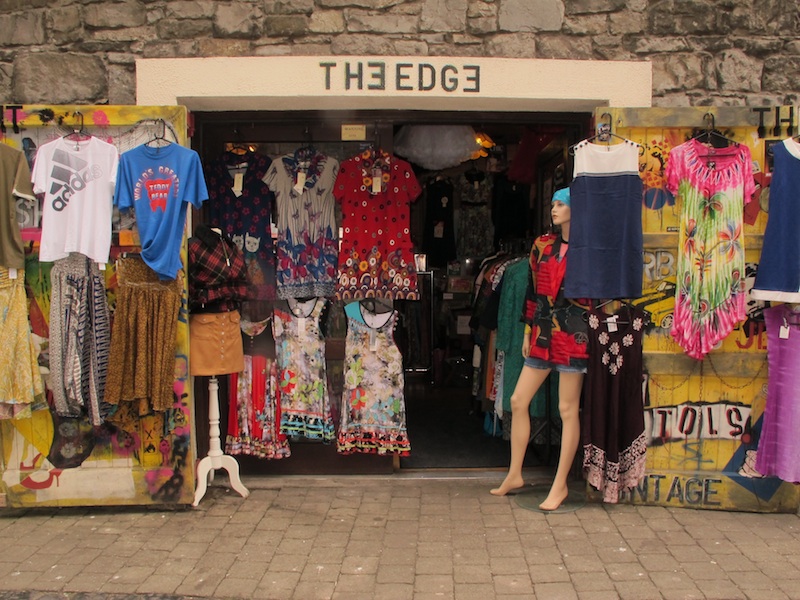 The Edge Clothing Store has become one of Limerick’s go to places for vintage fashion and clothing but the story behind it is just captivating! John Coughlan really is a man with a passion for fashion as he talked me through all the new season collection in The Edge clothing store.

John began his business unknown to himself during the 1980’s in Cork as he bought over 3,000 men’s overcoats to sell to college students around the country. He sold the jackets to budding fashionistas in colleges such as, “University College Dublin, University College Cork and the University of Limerick then known as Thomond College.”

Just with one single product John developed the thriving business and decided to open his first vintage clothing store, The Edge on 59 Catherine Street in 1983, as well as a second store in Cork. The Edge has been opened so many years and there is no question why it’s so popular, John is such a heartwarming character and the clothing pieces are very on point with the trends at the moment!

The Edge Clothing Store – Inside the store, filled with tons of great pieces! Photo: Laura Cotter/ I Love Limerick.

If you’re wondering where exactly these vintage pieces are from and what makes vintage such a unique thing nowadays then John has the answer for you! “I travel around Europe to source what’s in fashion for the vintage season ahead.” John travels to Liverpool quite often to sorce the best for his customers as well as sourcing clothes from America and Berlin.

You can be guaranteed that if you buy something from The Edge clothing store it will last you a lifetime due to its impeccable quality and one of a kind pieces. You can expect a varied price range as John tries to target his stock at college students! John told me he has a sale every so often where you can pick up loads of pieces for great value.

The Edge Clothing Store – outside the clothing store, so much colour to grab your attention! Photo: Laura Cotter/ I Love Limerick.

“The vintage we sell at the Edge is very similar if not the same as what’s sold in Camden” John told me, so how could you say no to afternoon shifting through the rails of The Edge? John is a very trendy man himself, as a teenager “I would follow the music and the trends of the time so I wanted to rely that in The Edge with the clothes that I sell.”

The Edge really prides in fashion and selling clothes that people enjoy wearing and playing around with! Fashion is all about being creative with and creativity and individualism is something you will receive from the The Edge.

The store is open from Tuesday to Saturday and is open Monday to Sunday during peak seasons such as Christmas and Easter. Make sure you pop in there and have a look at some of the amazing pieces as well as have a chat with John and his assistant Sarah!