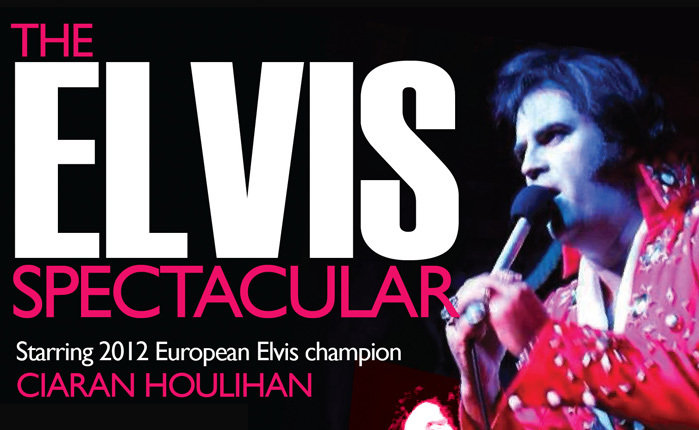 The Elvis Spectacular Show starring European Elvis Champion 2012 Ciaran Houlihan with his TCB Band and The Sweet Sensations is coming to the University Concert Hall on Thursday 14th September.

The Elvis Spectacular Show is Ireland’s longest running and most successful Elvis production, which is now in its 21st year on the road. Fronted by European Elvis Champion 2012 Ciaran Houlihan, the show also features the TCB Band and girl group, “The Sweet Sensations”.

There is no better way to commemorate the 40th Anniversary of The King this September than by booking your tickets for The Elvis Spectacular Show! This show is quite simply stunning the closest you will ever get to seeing Elvis live. And it’s playing to full houses all over the country and beyond so book your tickets now!

Ciaran looks, sounds and moves like Elvis, the costumes are created by Elvis’ original costumier Gene Doucette and the band, with a little help from “The Sweet Sensations”, are ready to rock your socks off!

Elvis Aaron Presley was an American singer and actor. Regarded as one of the most significant cultural icons of the 20th century, he is often referred to as the “King of Rock and Roll” or simply “the King”.

If you are only going to see one Elvis show in this 40th anniversary year, make sure it’s The Elvis Spectacular Show, starring Ciaran Houlihan, at University Concert Hall!

For more on The Elvis Spectacular Show click here