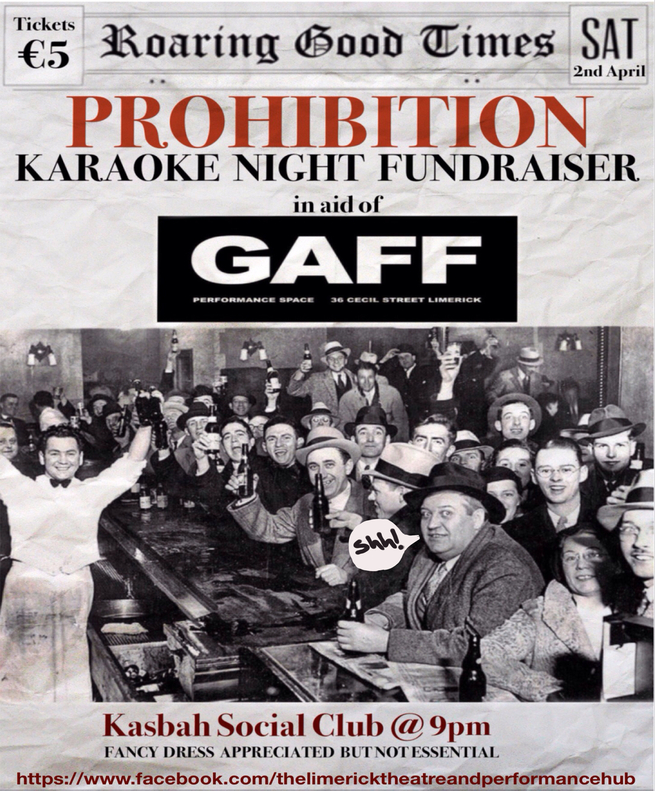 The GAFF Fundraiser in the Kasbah Social Club

The GAFF, Limerick’s artist and community run resource centre, announces its programme of work for 2016.  Just over two years in existence, The Gaff (Limerick Theatre & Performance Hub) has been slowly building a body of work linking artists and Limerick communities through work in its own studio location on Cecil St. as well as in a variety of community settings.  For 2016, The GAFF announces, Five Houses, a site specific theatre project in Moyross, CONNECT a multi-disciplinary youth programme run in conjunction with Garryowen Community Development Project and a community reading of a new full-length play by Mike Finn, Field of Dreams, in November, in St. Mary’s Park.  Funding for projects to date has come from a range of sources.  In 2014, funding for the Pigtown Fling music legacy programme and PULSE, theatre legacy programme came from Limerick 2014, National City of Culture sources.  In 2015, funding from  the JP McManus Benevolent Fund, the PAUL Partnership and a number of other sources allowed the company to embark on a three year programme of community based theatre programmes including,  Saving the House of Delmege with the newly formed Moyross Community Drama Group and research for the  Field of Dreams, project with residents of St. Mary’s.  LOSS, a short film was written and performed by young people from Weston, in association with Red Paw Media and had its launch in West End Youth Centre as well as featuring in the Fresh Film Festival programme.

Engagement with residents of St. Mary’s and of Moyross, through drama projects, has fuelled energy and interest in both of these communities. For 2016, Mike Finn, who is also Chair of the board of Directors of The Gaff, concludes his research for Field of Dreams, and presents a new, full length reading of his new, extended work in King’s Island Community Centre on November 26.

Within the ideological framework of allowing art to be celebrated by all citizens, in a place and context that is relevant to any given group, Mike Finn met with older people from King’s Island Senior Citizen Group as well as with individuals who grew up in St. Mary’s or who still live there, listening to stories from young and old and turning those into performances to be dramatized. A performance of excerpts of Field of Dreams took place as part of the Bealtaine festival, during May 2015, in The Town House, St. Mary’s Church, Athlunkard St. and in The GAFF.  Mike is now developing this original thirty minute script into a fuller drama which will have its premier reading by a community cast in later in November.

Working with Monica Spencer as facilitator in 2015, Moyross Community Drama, performed their inaugural work in The Hunt Museum, Corpus Christi School as well as in The Gaff.  This very energetic group now has plans for a new, site-specific theatre work to take place in the Moyross estates in October. Five Houses is another brand new theatre work, created by members of the group and supported by The Gaff.  Community theatre artist Naomi O’Kelly will direct Five Houses.  Originally from the Limerick, Naomi now works in Glasgow and is delighted to return to Limerick, at the invitation of The Gaff, to work with Moyross Community Drama. Based on the very pertinent theme of displacement and home, Five Houses will feature writing and performances by Sheila Fitzpatrick, Lucia Brunetti, Leanne O’Donnell, Carrie Barrett, Ger Purcell and Ursula Dundon.  The production will take place in Moyross, in a venue to be confirmed, during October.

Working with Garryowen Community Development Project, The Gaff will run a week long, Summer programme of dance and creative workshops.  This programme will be led by dance artist Laura Murphy, an artist committed to work in community settings with a strong track record in community led performance and academic aspects of dance (www.lauramurphy.ie).  The week long programme will run during the last week in July in the Dance Limerick studio on Johns Square.  Building on the success of the film LOSS, The GAFF aims to develop this dance initiative into a ‘Dance on Film’ project, an area in which Laura Murphy also holds wide expertise.  The film element of this project is dependent on additional funding being sourced but the week of workshops is confirmed.

Theatre Taster Workshops for All Ages

Gaff board members Marie Boylan and Norma Lowney will run a series of ‘taster’ drama workshops in association with a number of youth organisations – a channel of activity that continues to offer avenues of expression to people of all ages through drama and film.  Taster workshops in dance, film, puppetry, circus and stage make-up are also available.

An international competition was recently launched at, the LIT Music Festival, inviting music makers to make a re-mix on some of the music recorded on theCD of The Pigtown Fling, Limerick 2014, City of Culture Music Legacy Project. With a prize tag of €1,000, this competition is certain to attract wide interest.

Further information can be found here

The Gaff as a Resource to Professional Theatre Makers

The GAFF offers a range of support services for professional film-makers, musicians, actors, directors and producers. Professional development workshops in the different areas of performance and production are ongoing having been given a strong kick-start from the PULSE programme in 2014.   Availability of the auditorium for rehearsal, development work and film making is one of the most vital services The GAFF can offer but the organisation is temporarily prohibited from extending this service to the community due to an urgent need to upgrade electrical works.

The auditorium in Cecil St. forms a crucial resource for workshops, sharing of new work in advance of full performance as well as providing a much needed rehearsal space for professional companies and artists located in the city centre.

Fundraising for Upgrade to Electrical Works at 36 Cecil St

The GAFF aims to raise €5,000, in the coming months, in order to make the auditorium space at 36 Cecil St. safe for use by the public. Fundraising events for 2016 include a Prohibition themed Karaoke night in the Kasbah Social Club April 2, and a vintage clothes sale in the Milk Market and a Music Bingo night.  Fundraising from trusts, businesses and individuals is a constant activity for the organisation.

Individuals and community groups who would like to find out more about the activities of this artist and community led organisation, can check out The Gaff on Facebook here or email [email protected].