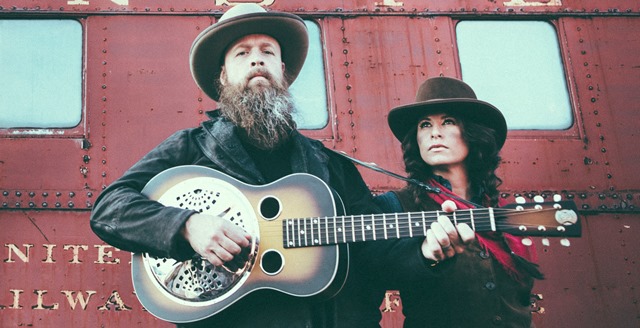 Americana duo The Grahams to play Dolans Limerick on November 18

Alyssa and Doug Graham have spent nearly their entire lives exploring music together. Friends since she was 7 and he was 9, they became a couple in their teens, then husband and wife. Somewhere along the way, they also became The Grahams, a dynamic Americana duo who’ve married their love of adventure with a desire to build on foundations laid by their musical predecessors. Their first song-crafting expedition, along the Mississippi’s Great River Road, became their 2013 debut, Riverman’s Daughter. For its follow-up, they rode the rails – and wound up recording not only a new studio album, the explosive and aptly named Glory Bound, but also Rattle The Hocks, a documentary filmed on the move and in venues from Sun Studio to Amtrak’s famed City of New Orleans train, produced and directed by Cody Dickinson of the North Mississippi Allstars, which chronicles their train-bound excursions and the influence of train travel on American roots music.

Helmed by Grammy nominated producer Wes Sharon (John Fullbright, Parker Millsap) at his 115 Recording studio in Norman, Oklahoma, The Grahams’ songs for Glory Bound, co-written with collaborator-since-childhood Bryan McCann, capture the rhythms and energies of that transport system and the momentum of its time, with Doug’s masterful resonator slide-work and harmonies fuelling Alyssa’s locomotive voice and acoustic guitar chords, while producer Sharon was able to bring in guests of the calibre of John Fullbright, Byron Berline (Bill Monroe, Flying Burrito Brothers, Dillard & Clark, Stephen Stills), one of the world’s premier fiddle players, and Ryan Engelman and Gabe Pearson of the Turnpike Troubadours.

“They set out to travel the railroads, immerse themselves in the culture and influences of other hobos and brakemen of yesteryear like Woody Guthrie or Jimmie Rodgers and they certainly have delivered. It’s an addictive and engrossing historical American journey and one that needs to be taken several times to fully appreciate its history.” Fatea

“‘Glory Bound’, the latest album from Alyssa and Doug Graham ranges widely across its musical foundations taking influences from folk, country and rock, and the result is an album that drives with the power of a heavy locomotive, which is precisely where the The Grahams found their inspiration.” FolkWords