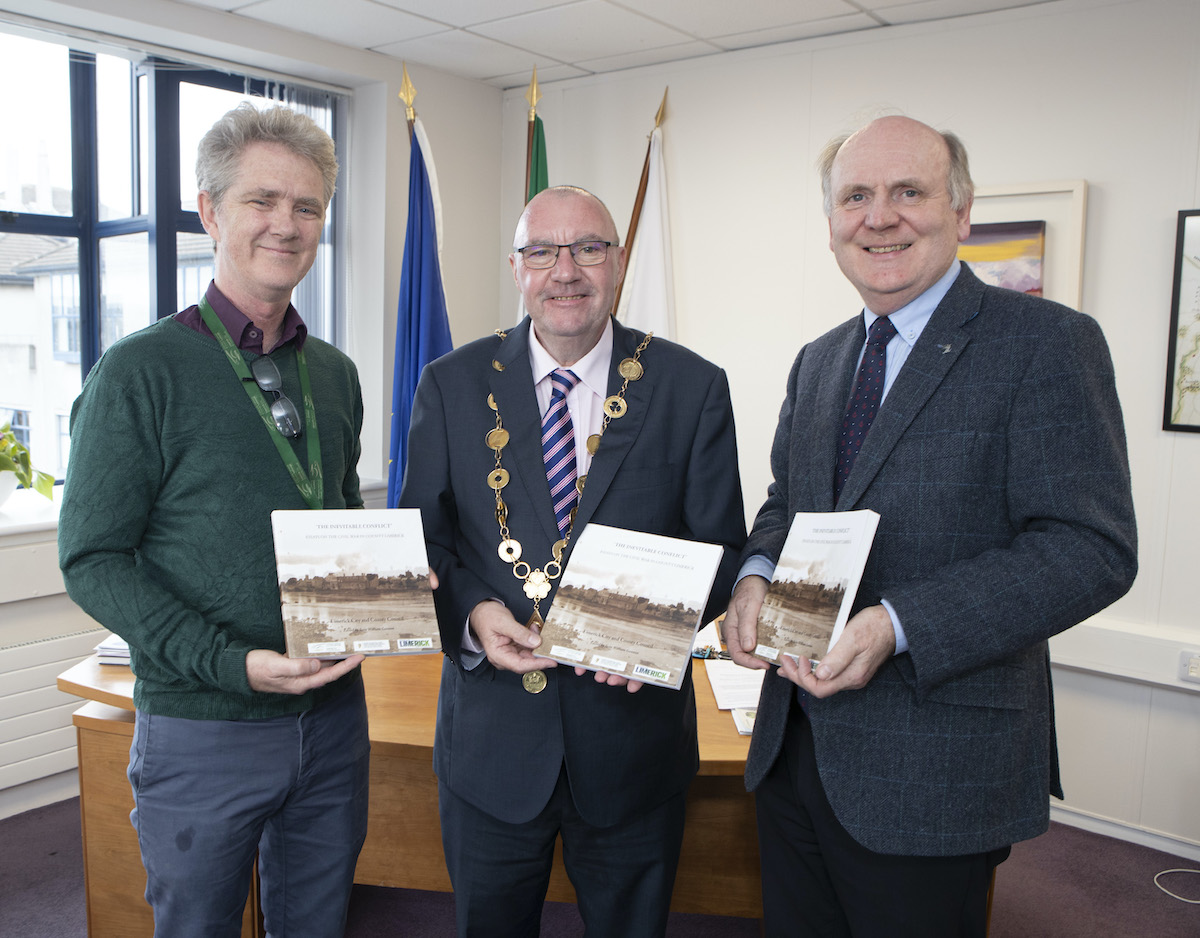 They employ a wide range of traditional and newly released archival resources to shed new light on the experience of the Civil War in Co Limerick, the strategic importance of which cast it as one of the principal theatres of the conflict’s conventional phase.

On receiving the first copy of the book, Mayor of the City and County of Limerick, Cllr Francis Foley said, “This book provides a remarkable historical and photographic record of the Civil War in Limerick. While we sometimes get overlooked in the retelling of the narrative on a general basis, it provides a wonderful accompaniment to that overall story which has framed our lives since.”

The volume is richly illustrated. Drawing on the extensive contemporary visual reportage by Pathé News and photographer William D. Hogan, who was embedded with the Irish Free State’s National Army. It provides a remarkable photographic record of the Civil War in Limerick, the most visually documented event in the county’s revolutionary history.

Limerick City and County Librarian Damien Brady said, “We are very proud to have produced this very fine volume as a contribution to the 2022 Decade of Centenaries programme. I would like to express my gratitude to my library colleague, Seán William Gannon, who did such an exceptional job of coordinating and editing the book.”

Among the contributors in ‘The Inevitable Conflict’ are:

-Dr Matthew Potter, Curator of the Limerick Museum, examines the Civil War through the prism of local politics in Limerick.

-Stephen Kelly and Dr John O’Callaghan trace the war’s course through the city and county respectively. In the first of two essays in the volume.

-John Dorney analyses the casualty figures for Limerick, an important metric that reveals much about the character of the conflict in the county and explores the civilian experience of civil war in Limerick where problems with food supply, public transport, and physical harassment became commonplace.

-Professor Linda Connolly focuses on female casualties, uncovering many long-forgotten tragic cases of injury and death, which extracted high social and economic costs from the victims and/or their families.

-Benjamin Ragan explores the place of the supernatural in Civil War Limerick, presenting a variety of stories of perceived paranormal activity that speak to the conflict’s psychological toll on combatants and civilians alike.

-Sharon Slater examines public entertainment in the context of everyday life proceeding with a rather surprising degree of normality, demonstrating that, aside from the period of high-intensity urban warfare in mid-July, Limerick city’s theatres, cinemas, and sports venues operated as normal during 1922.

-Thomas Toomey draws on his vast collection of oral histories to explore friendships amongst East Limerick IRA that survived the Civil War split. He details several intriguing examples where individuals from both sides put personal relations before political loyalty in 1922/1923 when dealing with former War of Independence comrades.

-Siobhán English examines the afterlives of Limerick’s Civil War generation through the lens of the Military Service Pensions Collection. Using Limerick-related applications for compensation under the terms of the Army Pensions Acts of 1923/1953, she uncovers several examples of lives scarred or destroyed by the conflict.

Print copies can be acquired through Limerick City and County Library Service’s Local Studies Department. Email [email protected] or telephone 061 557727 to get yours today.

To download an e-version of the book, go HERE