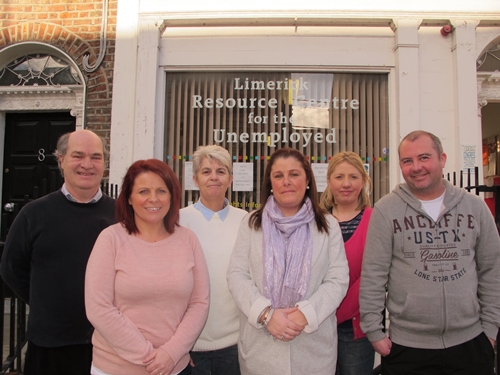 The Limerick Resource Centre for the Unemployed

The Limerick Resource Centre for the Unemployed at 9 Cecil Street offers a wide range of free and confidential services from helping job seekers fill out job applications to free computer classes.

The Limerick Resource Centre for the Unemployed opened their doors for the first time back in January 1987 at 33 Thomas Street. The premise in Thomas Street was made available to the Trades Council by Limerick City Council and the late Jim Kemmy, TD along with others.

The Centre remained on Thomas Street until 2004 when it moved to Hunts Lane under a lease from Shannon Development. In January 2014 the centre moved to its current home on Cecil Street.

From the beginning of the Centres existence it has established a good reputation in areas of welfare rights information and adult education and training especially basic IT training and since 1999 it has been an accredited ECDL test centre.

The Centre also provides job-seeking supports such as CV typing and access to communications facilities such as phone, fax and internet. Along with being a service provider, the Centre is also prepared to become involved in campaigns around issues of relevance to its client base.

Padraig Malone has been the co-ordinator of the centre since 2001.

The centre has also had a long and fruitful association with the Irish National Organisation of Unemployed (INOU) which also started in 1987.

The facilities that the centre provides include a range of free and confidential services, including providing information on entitlements, JobSeeker’s payments, the Back to Education Allowance, Family Income Supplement and Disability Allowance.

The Centre receives funds from several fundraising initiatives that take place during the year. Padraig and his team greatly appreciate the support they have received up to now. Tickets for their Easter Raffle are now available in their centre on Cecil Street now.

Keep up with the centre on Facebook here.
For more stories about classes in Limerick click here.