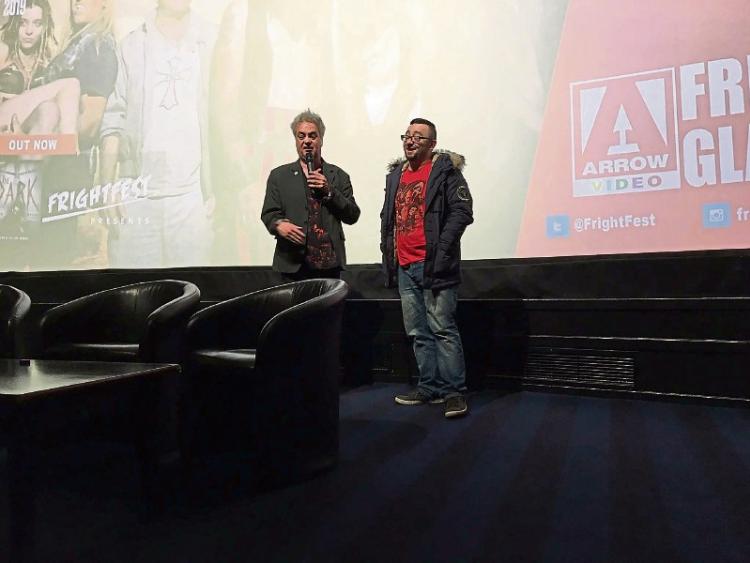 A release date has yet to be announced for The Perished by Paddy Murphy, as the film is still in post-production. Pictured are Paul Mcevoy (left), the co-founder and programmer of FrightFest, and Paddy Murphy (right), the director and writer of The Perished, on stage at FrightFest Glasgow.

The trailer of a new Irish movie, The Perished by Paddy Murphy, which was filmed in both Limerick and Clare, was released globally on Friday, April 12. The film is set in Ireland, pre-referendum for the Eighth Amendment, and follows the story of a young woman who travels to England for an abortion. After moving in with her friend, however, she discovers it was once a mother and baby home and strange occurrences begin. A release date has yet to be announced as the film is still in post-production.

The Perished by Paddy Murphy was filmed mainly in Clare, but Limerick was also used for locations. House Limerick will feature in the movie as the opening scene was filmed in their nightclub Amber, with the Old Fire Station restaurant also making it into the film. Majority of the movie was filmed on site at a Parochial home in West Clare.

Paddy Murphy is the writer and director of The Perished, and he is also part of Celtic Badger Media, which is a filmmaking collective based in the West of Ireland. They have created several short films, music videos and one feature film, The Three Don’ts, which was shot in Limerick and can be watched on Amazon Prime.

Paddy began his career studying video production and manipulation at Limerick Senior College. He then ventured down the route of video game development and moved abroad for a year, it was on his return to Ireland when he began writing.

Paddy told I Love Limerick, “It’s such an exciting time right now! We had the trailer shown at FrightFest Glasgow, a horror film festival, in February and it got a great reception. So, we’re delighted that the trailer is getting so much attention and now we’re just trying to get ‘The Perished’ ready for submission for FrightFest London, which takes place in August. To have a film showcased at FrightFest would be a dream come through!”

The film is set in Ireland, pre-referendum for the Eighth Amendment, and follows the story of a young woman who has returned from travelling to England for an abortion and discovers there are sinister forces following her.

Massimiliano Borghesi is working on The Perished as a sound mixer/designer and has worked on numerous projects in the past, bringing a lot of experience and talent to the film. Aaron Walsh was the editor of the film, with Barry Fahy supporting him by providing additional editorial work.

Celtic Badger Media was developed in May 2015. The company, initially known as ‘Furious Badgers’ was set up after founder, Paddy Murphy and a few of his film-making friends entered the 48-hour film competition in 2015 with a short film called I.R.I.S.

Founder Paddy Murphy recalls how the company co-founder Barry Fahy was getting him a custom slate printed for Christmas and “asked if I was to set up my own company, what would I call it. I thought of how I had been working on a lot of Irish & Scottish films at the time so I said Celtic Badger – he put that on the slate and history was made”.

FrightFest is a film festival that screens movies from the horror genre only. The festival, which takes place on the August Bank Holiday weekend, started back in 2000. It has moved locations over the years due to increasing popularity, and this year it will settle at Cineworld and Prince Charles Cinemas on Leicester Square, in London’s West End, from Thursday, August 22 to Monday, August 26. FrightFest Glasgow is a smaller version of the iconic horror film festival that takes place in Scotland.

The Perished is set to start hitting festivals around the world this summer.