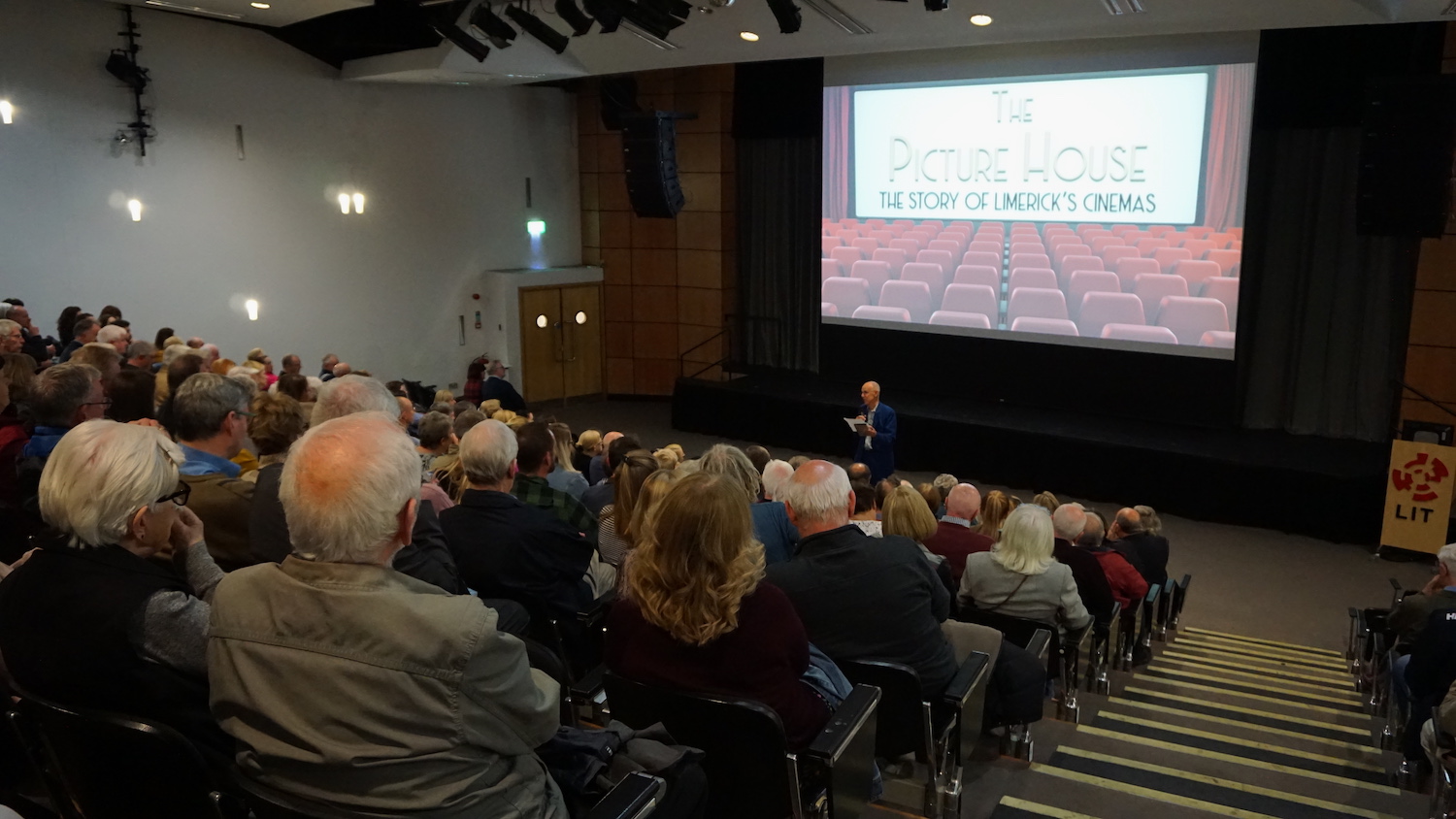 The Picture House – The Story of Limericks Cinema’s got its premiere screening in the Millennium Theatre in April 2019. Pictured speaking above at the screening was the director Dave Burns. Picture: Simon McGuire. The Picture House will be released from Monday, Sept 28 to Sunday, October 4 online

The Picture House – The Story of Limericks Cinema’s is an hour long film documentary that tells the story of the glory days of Limerick’s one-screen cinemas until their demise in the late 1980s.

We see how the cinema screen was, and is, the biggest cultural outlet for Limerick people, and look at the various venues that thrived in and around the City Centre.  We get the idea of how most theatres mainly screened films but also mounted variety shows, concerts, operas, plays, and talent shows.

The documentary has three main threads:

At its height in the sixties, Limerick had seven or eight cinemas of various standards, and the documentary looks at them with regard to their history, and their impact on Limerick’s cultural, social and economic life.  We see the slow demise of the city centre cinemas due to neglect, competition from television and VHS, and the rise of the profitable suburban multiplex.

The documentary, narrated by Mike Finn, takes the audience on a tour of the main cinemas.  At each venue, we get a potted history of the cinema, together with photographs and adverts from the Leader, background material –reminiscences from the staff who worked there, stories about the behaviour of the clientele, the kind of films that were shown together with film posters and snatches of music, the controversies which arose, and reminiscences from patrons.

‘The Picture House’ – The Story of Limerick’s Cinemas is an hour long film documentary that tells the story of the glory days of Limerick’s one-screen cinemas until their demise in the late 1980s. #ilovelimerick #lovelimerick #lovinlimerick https://t.co/7uybGL2RYG pic.twitter.com/TSmgP8A4YD

The Picture House seeks to give an overarching flavour of the history of Cinema from the first cinema in La Ciotat in 1899, the advent of talking pictures, colour, the evolution of digital cinema and the return of the city centre cinema in the 21st Century.

Simon McGuire, Editor of the film said, “Following on a year since we screened this documentary at the Millennium Theatre, LIT, we felt that it was time to give the people of Limerick another chance to take a trip down memory lane. For a limited time, the documentary will be available online to watch and enjoy. We hope that it will bring back some great memories of the excitement of the silver screens that Limerick once had an abundance of.”

The Picture House will be released online for a limited time only from Mon, Sept 28 to Sun, October 4

Written and Directed by: Dave Burns