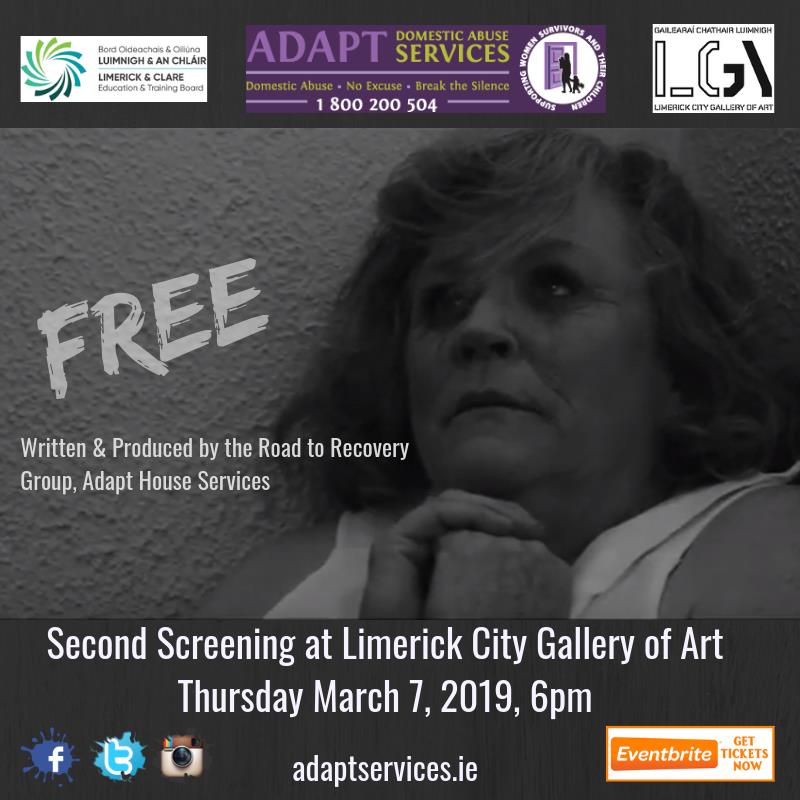 The Road to Recovery consists of a small core group of women based in Limerick city who avail of services provided by Adapt Domestic Abuse Services Limerick, their past abusive relationships have created a bond between them which is helping to motivate them to spread awareness and hope about Domestic Abuse.

The Road to Recovery group wrote, produced and shot a short film called ‘Free’ in 2018 which was officially launched on November 25, 2018, in The Life Centre, Henry St. Limerick. This short film is set in the 1930s and 1950s and sends a powerful yet subtle message that people can break free from the cycle of Domestic Abuse.  The Road to Recovery group is supported by Adapt and Limerick and Clare Education and Training Board. They wanted to show hope that with the right supports available anyone has the possibility to break Free from an abusive relationship.

They created a Indiegogo Fundraising page to coincide with the official launch of the 2nd screening of Free in order to raise funds firstly to enter as many local, national and international Film Festivals appropriate to their subject content so they can spread their message of Hope and possibility of breaking Free from abusive relationships to as many people as possible.
Domestic Abuse takes a number of forms, physical, verbal, emotional, economic, religious, reproductive and sexual abuse, which can range from subtle, coercive forms to rape and violent physical abuse. As a group, they didn’t want to show any physical violence but let the audience see the subtle abuse and the devastating effects domestic violence can have not only the person but children as well almost like a vicious cycle. As survivors of Domestic Abuse, it was important for them to portray how lonely and helpless a person can feel in an abusive relationship. They said, ‘Our aim is to give people hope and the possibility that they can leave an abusive relationship with the appropriate help and support. As survivors we are on the road to recovery it was a long journey that we are still on but we want to show others you can make it, you can get your life back and change it for the better.’

As a result of Adapt House’s film Free successful official launch night in November 2018, they have secured a second screening in Limerick City Gallery of Art which begins on March 4 to 15 which includes International Women’s Day on March 8. The film will be played in the Hub, to allow people to see the film as many times as they like. The song ‘Through a Child’s Eye’s’ which was written especially for the film by Graham Mills a talented Irish songwriter and performed beautifully by his daughter Zita Mills will be separately available to listen to.  There is an official information night on the 7th of March from 6 pm to 7.30 pm where they will have a representative from Adapt speaking about supports and services available, a testimony from a survivor of Domestic Abuse and a representative from the group discussing the background of the film also other new exciting projects that are upcoming.

They have also been asked to create a live stage drama about Domestic Abuse which they are now in the process of writing a script this will act as a supportive piece to their film that will be in rehearsal alongside the ongoing promotion of the film in the Short Film circuit. No venues have been confirmed yet for their play but they hope to be finished in the coming weeks.

They would sincerely appreciate it if their event and upcoming projects were promoted, as survivors this project has been a labour of love for them, helping them on their way to recovery and allowing them to send a message that they have to break the silence that surrounds Domestic Abuse and create a message of hope and the possibility of being Free.