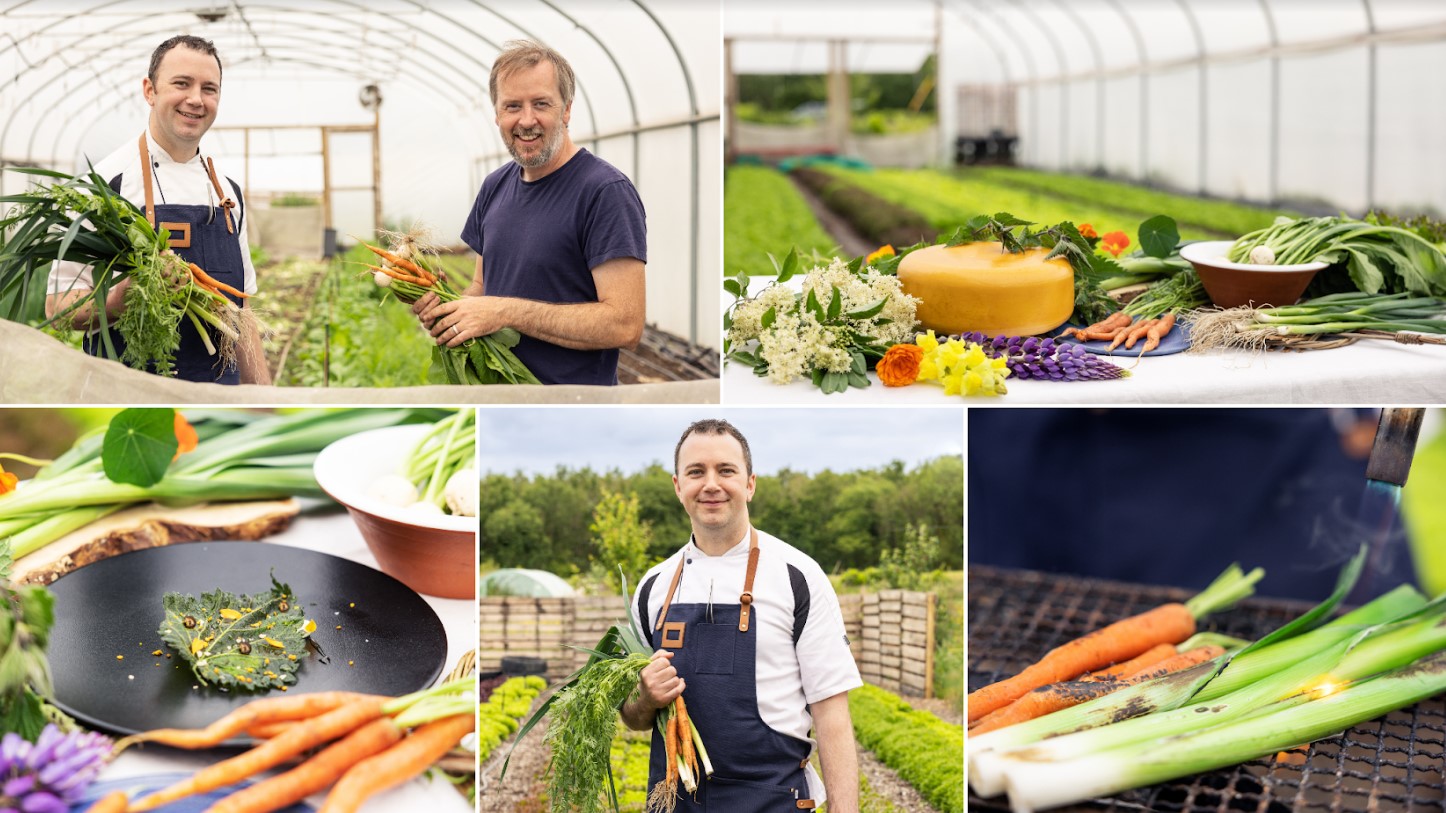 Caomhán is a recent graduate of TU Dublin’s new Botanical Cuisine course – the first ‘farm to plate’ culinary degree programme of its kind in Europe – of which highly regarded Irish Chef & Restaurateur, JP McMahon, is a Patron. In line with The Salt Project ethos, Caomhán’s five-course fine dining menu will see Wallace’s sought-after produce – the likes of baby carrots, salad leaves, spring onions, Hakurei turnips, and baby leeks – showcased in a series of innovative plant-focused dishes, created to provide guests with a real sense of place to the farm and the surrounding area.

Seasonal ingredients at their peak freshly hand-picked the morning of each Pop-up by Wallace and de Brí will be used in their entirety, barbecued over hot coals on a Hibachi grill and others finished in an Ooni pizza oven, a stone’s throw from where they were grown.

New Leaf Urban Farmers’ naturally grown produce will take centre stage alongside ingredients from a supporting cast comprising some of Co. Limerick’s best artisan producers. Goat’s cheese for the first course comes from Leahy’s family-run Bally Goat Farm in Newcastle West, Co. Limerick. Caroline Rigney’s farm less than 30km away in Stonehall, Co. Limerick will provide Caomhán with rare breed pork belly and dry aged grass-fed beef is being sourced 20 minutes down the road from Croom-based butcher, Pat Barry. Local grower, Colm Smyth (of Irish Gourmet Mushrooms in Herbertstown, Co. Limerick), will be supplying de Brí with his oyster mushrooms, and honey produced and harvested on the adjacent Croker’s Farm in Ballyneety will feature in both the first and final dishes of the night.

On arrival guests will be greeted with a refreshing summer apéritif and given the opportunity to take a pre-dinner tour of the one-acre farm with its Founder and 2021 Food On The Edge Ambassador, Kevin Wallace – the first known vegetable farmer in the country to use Korean Natural Farming methods (without chemicals or pesticides) to grow produce naturally on a commercial scale. Wallace, who set up the farm in 2016, has supplied the likes of Michelin-starred, The Oak Room (Adare Manor, Co. Limerick), Ichigo Ichie (Cork city) and Aniar (Galway city), as well as The East Room at Plassey House (Limerick city) and Lignum in Co. Galway. One of his farm’s polytunnels will then provide the scene for an unforgettable evening with those attending enjoying a hyper-local plant-focused fine dining experience at two long tables, which together will seat up to one hundred diners per night.

Each of the five courses will be matched with a different natural, organic, or biodynamic wine specially selected and served on the night by Dalton Greene (Owner of Rift Coffee & Rifts Larder in Limerick city) and independent Irish craft beers produced by Limerick-based microbrewery, Crew Brewing Co. The polytunnel dining space will be creatively styled with locally grown blooms and wildflowers from the farm by Botanical Florist & Stylist, Tara Maloney, of White Dove Nurseries in Abbeyfeale, Co. Limerick. And, the dinners will be set against a backdrop of live music from local Singer/Songwriter, Stuart Bond, who will perform an acoustic guitar set throughout the course of the evening.

The ticket price includes the five-course dinner plus matching wines and craft beers. Foraged and homemade non-alcoholic drinks options will also be available on the night. The seating capacity for each Pop-up is limited to 100 people per night so you are encouraged to book early to avoid disappointment.

Tickets for the ‘Salt of the Earth’ Pop-up Dinners at New Leaf Urban Farmers in Ballyneety, Co. Limerick on Friday 5th and Saturday 6th August (7pm start time) are priced at €95.00 per person.

Tickets can be purchased HERE