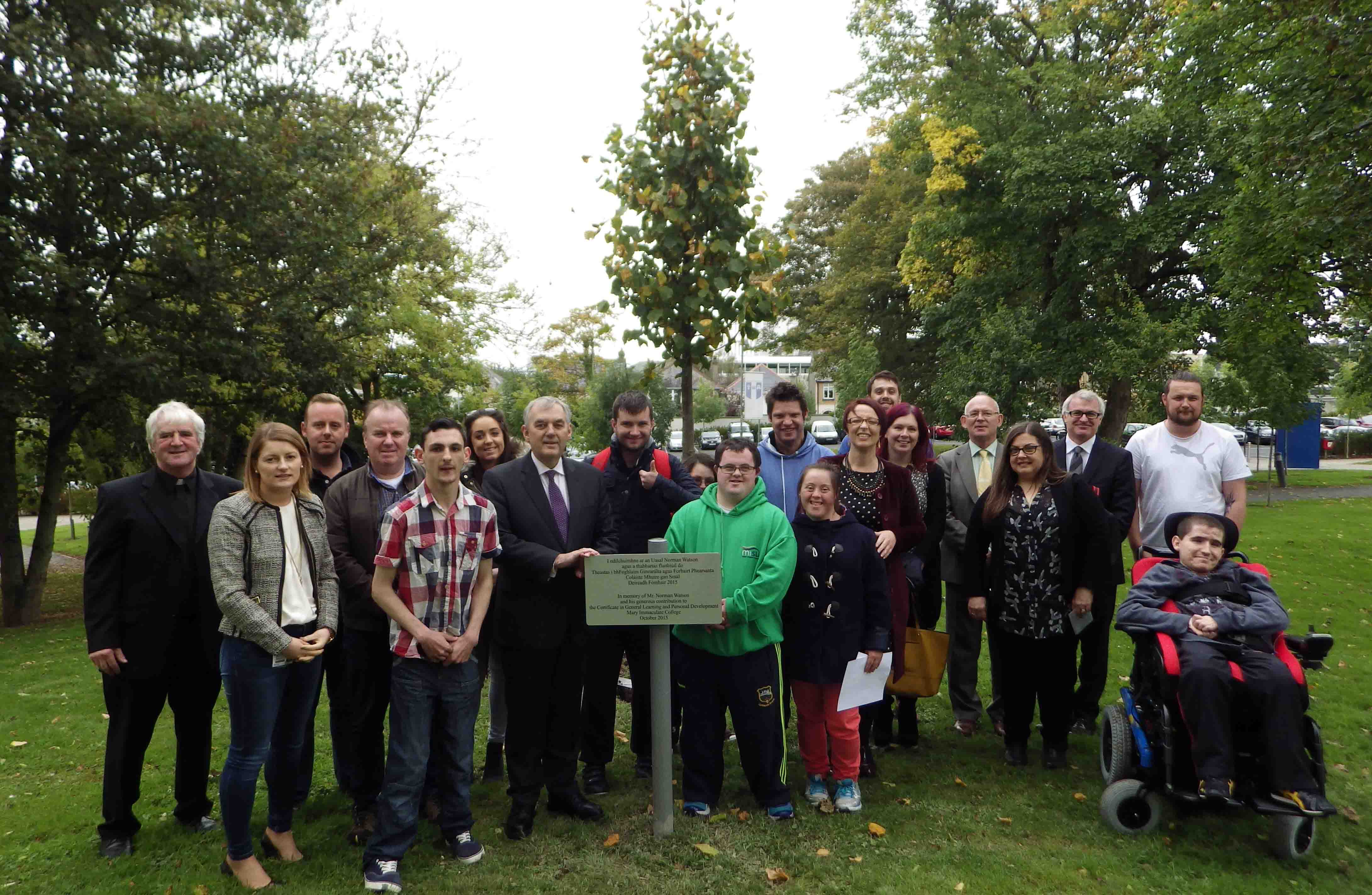 Launch of The Study of Cubism and Expressionism Combined

Pictured: Staff and students of the Certificate in General Learning and Personal Development (CGLPD) MIC pictured planting a tree in honour of the late Mr. Watson. Picture: Brian Gavin Press 22.

The official launch of The Study of Cubism and Expressionism Combined, an exhibition featuring the work of graduands of the Certificate in General Learning and Personal Development at Mary Immaculate College, was held this past Wednesday evening, October 14.

According to Prof. Michael A Hayes, President of MIC, the exhibition was inspired by two prominent art movements which the students engaged with as part of their creative art appreciation module.   Both of these movements, which emerged during the early 20th century, were dedicated to overcoming the confines of academic art and Renaissance realism and embracing new forms of stylistic innovation.  Taking inspiration from these movements, the students have worked to incorporate these techniques, while retaining their own unique perspective.

‪The Certificate in General Learning and Personal Development (CGLPD) programme, which has been in existence in the College since 2013, has as its main aim to enhance the quality of life of young adults with intellectual disabilities by providing third level opportunities, which have previously been denied to them.

Speaking at the launch graduand Kate Crotty, from Ennis said of the programme “I loved learning new things and completing the modules. I really liked the social aspect of coming to College and it gave me the opportunity to travel independently.  The best thing about the course was that I got to go to College, just like my brothers and sisters”.

According to her mother, Caitriona Crotty “This programme was a wonderful life experience for Kate. She developed intellectually and socially and grew into a very independent young lady.  Everyone has commented on how she now engages in conversation and has so much to say”.

Eamonn O’Dea from Bruree, whose son Paul recently completed the programme, echoed these sentiments saying “This course gave my son the opportunity to mix with people from all walks of life and mainstream students his own age. It enabled him to develop social skills and grow in confidence and we have seen a huge change in him since he started.  He would never have had the chance to attend third level without it”.

The two year programme, which is made possible by the generous donations from a number of philanthropic foundations, is devoted to the academic learning, personal growth and career development prospects of the student whereby the full development of each student’s potential, dignity and self-worth is embraced.

The JP McManus Foundation has been on board since the inception of the programme to assist with funding and more recently the College was delighted to receive a generous donation received from the Norman Watson Foundation. The Norman Watson Foundation was established to administer funds to deserving, worthwhile causes that the late Mr. Watson, a keen gardener when alive, wanted to support.    After his retirement from his job, as a Meteorological Officer in Shannon Airport in the early 1980s, he enjoyed spending much time in his garden and was very connected with the earth.  In recognition of his generous donation to the CGLPD programme Prof. Hayes and students of the programme planted a tree on the campus grounds in honour of Mr. Watson so that “as the tree grows and takes shape over the years to come, his generous support will be remembered for the lasting contribution it has made to this programme.”

Another big day is in store for the graduands of this programme and they are set to graduate next Friday in front of their families and peers at the MIC 2015 Conferring Ceremonies.  We wish them every continued success.

Read more about the Study of Cubism and Expressionism Combined here