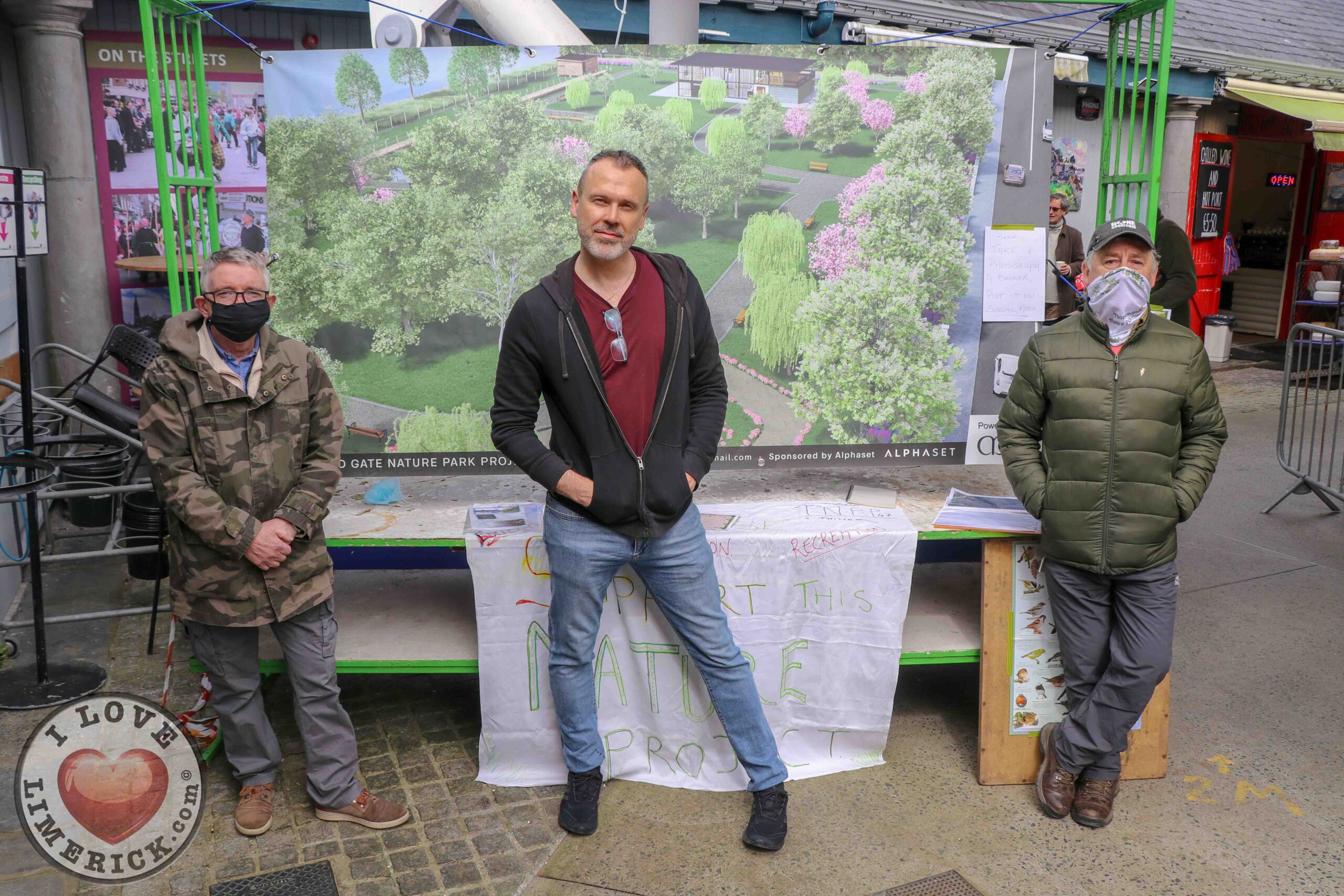 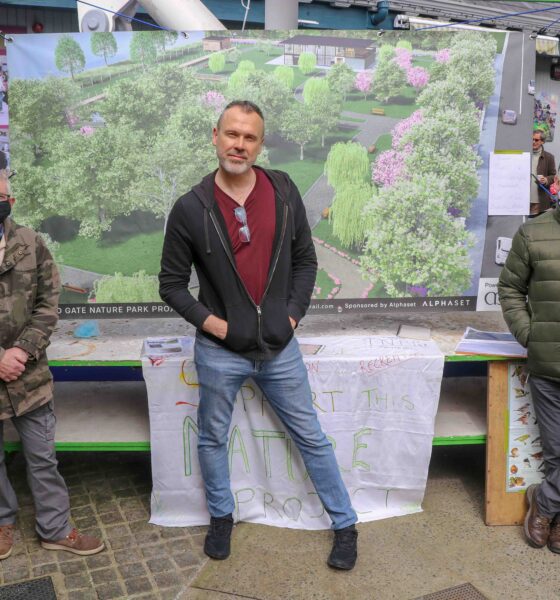 Thomondgate Nature Park Project is a campaign set up by the community to develop a safe and secure national park to allow people to reconnect with nature. Richard Lynch (centre) pictured above with Kevin Keily and Pat Murphy of Thomondgate Nature Park project at the Limerick Milk Market. Picture: Hugo Lynch/ilovelimerick 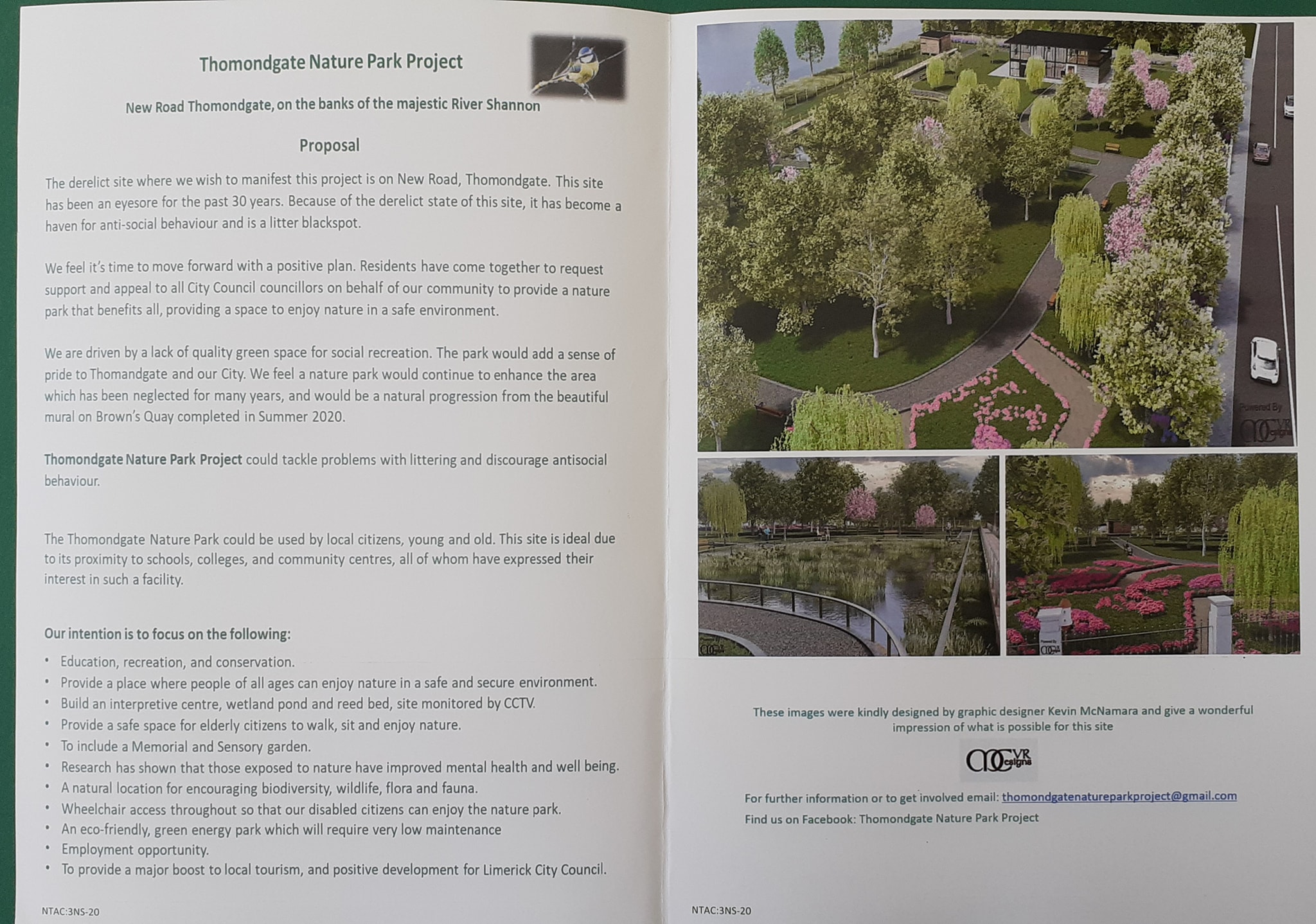 The project involves a broad number of people across the city as well as the local community, including St. Munchins Community Centre and resident’s association.

Thomondgate residents have launched a campaign to build a nature park on one of the area’s last remaining undeveloped patches of land. Pat Murphy the Campaign Manager for Thomondgate Nature Park Project lives just opposite the land and said, “We have been trying to get this nature park project up and running for a couple of years now. This site in question has been derelict for over 35 years and for the last 20 years we have been trying to get something positive done in the area and we thought that a nature park project would be a positive development for the area and not just for Thomondgate but for all of Limerick.”

The area, which is a riverside field off the New Road has been earmarked for 63 housing units as part of a €400m regeneration which will also include a new state-of-the-art medical facility and the creation of over 200 construction jobs across the sites. The proposal for the Thomondgate site comprises 63 new housing units, which will be a mix of affordable, social, and private one, two, and three-bed homes. 4

Locals instead feel that the area is better served by an open space – and have pointed to out-of-use homes elsewhere in the community which could be transformed into living spaces.

At present, the site is fenced off, and a hotspot for dumping. The project involves a broad number of people across the city as well as the local community, including St. Munchin’s community centre and the resident’s association. The project took off because the community felt that there was a lack of positive developments in Thomondgate for many years and that the area is highly neglected and they want to see positive change that will benefit the overall health of the community.

At the Milk market this morning with Claire Waters and Hugo showing their support for Thomondgate Nature park Project. pic.twitter.com/w8xphUHMWV

Although a campaign for a nature park has been taking place on and off for the last few years, it’s only now that a firm proposal has gone out to local councillors, with a blueprint subsequently set to be shown to residents and local schools.

The Thomondgate Nature Park Project team have been campaigning in the Milk Market across recent weekends to try and drum up support for their plan, and recently pitched their idea to Paul O’Connell the former Irish Rugby player. Pat said, “We had our Thomondgate Nature Park Project banner at the Milk Market for a couple of weeks to gain support for the project and Paul O’Connell happened to be there with his family and I explained to him what the project was about which he was very interested in and wished us well.”

The team said, “We are asking you to support the Thomondgate Nature park Project by joining our membership list and it’s free. It just means you are offering your support to this worthwhile project for the city.”

Pat said, “People can support by engaging with our social media campaign on Facebook, Instagram and Twitter (@TNPP37419414) and by contacting their local representative regarding the lack of enjoyable green space.”

To learn more about the Milk Market go HERE

Related Topics:Thomondgate Nature Park
Up Next