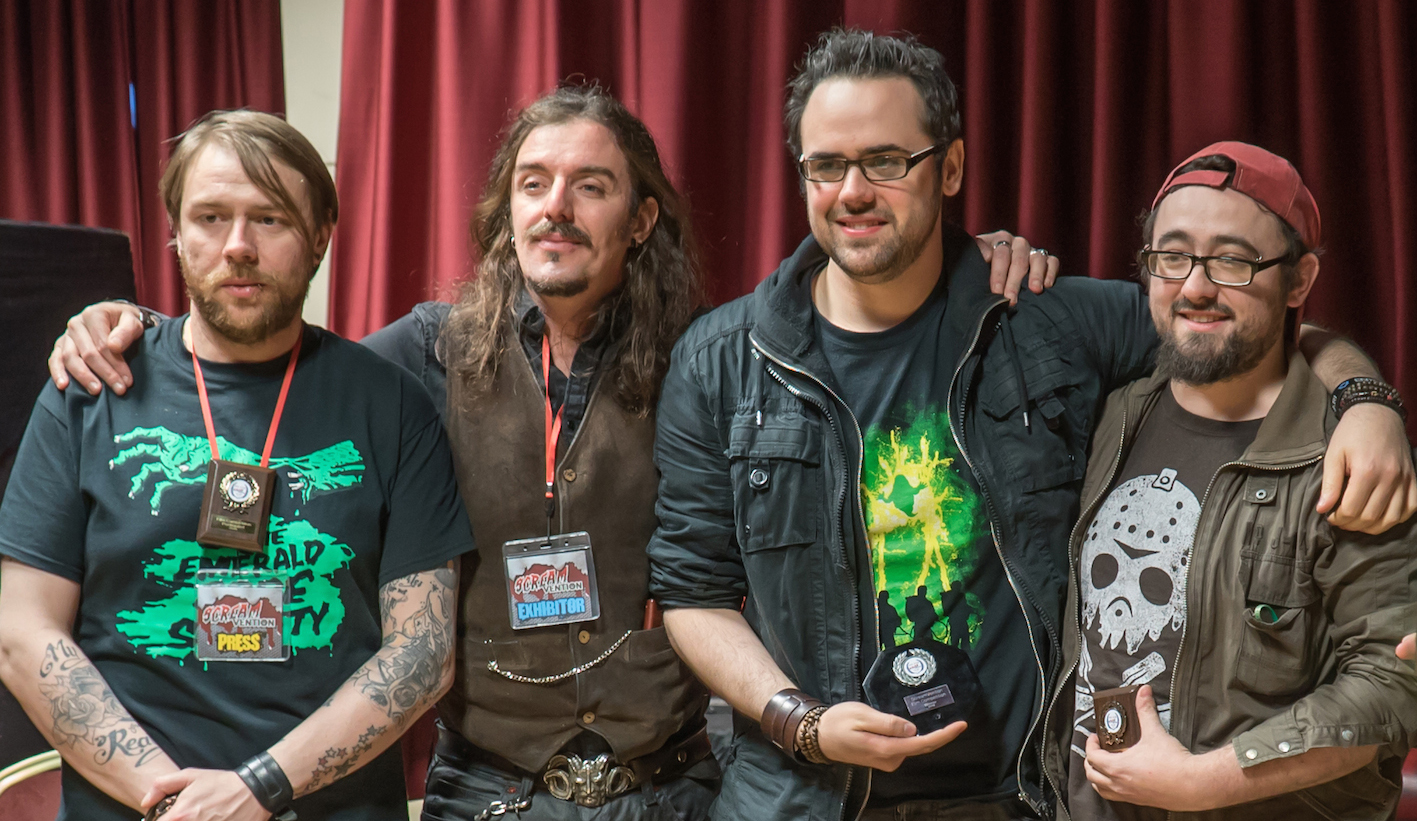 Three Limerick filmmakers entered films into the nationwide horror movie competition ScreamVention which is a horror convention that took place in the Red Cow Moran Hotel in Dublin this past February.

Steve Hall, Johnny Baynes and Paddy Murphy, filmmakers and horror enthusiasts all reached the final of ScreamVention.  Johnny Bayne’s ‘Anger of the Dead’ and Paddy Murphy’s ‘Framed’ were contenders for the top prize but were pipped to the post by fellow Limerick man and dear friend Steve Hall, who walked away the overall winner for his film ‘Dinner Date’.

Steven Hall’s passion and love for story telling came from a very young age. Steve’s mother bought him his first camera which he used with his friends to make horror movies in the woods as a child. Since finishing a B.S.c. Honours in Video and Sound, Steve has written and directed many projects for the festival circuit and for Irish television, most recent of which being the international and award winning ‘Sinners’. Coming from a cinematography and visual effects background Steve has a unique eye for visuals. Steve is a multi- award winning filmmaker, winning awards internationally for Best Film, Best Drama, Best Director and Best Cinematography. Speaking to Steve he admitted that his “true passion is directing and cinematography, I love to create something that I can only see in my mind and allow it to channel through me to others”.

When asked what is film he replied “I eat it, I sleep it, I scream it, it is my passion”. At the moment Steve is looking to get a few more shorts off of the ground. Steve loves “high concept”, he creates stories that push the boundaries of genre and has a visual flare that draws you in and holds you there.  Horror and high concept give Steve the chance to “create something that is not your everyday situation, something out of this world”. Steve’s latest film “Safe” has been selected for the Cannes film festival. Steve described the support he has received upon being selected for the Cannes film festival and winning ScreamVention as “incredible”.

Johnny Baynes started making films when he was 23. Johnny found himself in the film making community almost by accident. After spending time as a junior journalist with the Limerick Leader, Johnny’s love of music brought him to Germany to work with a record company. “It didn’t pan out and after a year or two I ended up back in Ireland”. Back in Ireland Johnny applied to do a music production course in Tralee and somehow there was a mix up in the applications and ended up applying to the film course too. Unfortunately Johnny was unsuccessful in securing a place in the music production course. Johnny went on to do a night time course in film with Mark Griffin in Limerick Senior College and “loved it, I shot a short film and became addicted to film making”. Johnny showed his short film to the course co-ordinator in Tralee and secured a place in the the two year course and has been filming ever since. Johnny now works with Steve Spade, “this opened open a lot of doors as now I had access, to actors, lights and sound” in the last year and a half I’ve made one full movie with Steve Spade and worked on Two shorts. Now with four short films under his belt the future looks promising for Johnny Baynes. ‘Cavity’ a film shot and co-directed by Johnny Bayes and directed by Steve Spade premiered at ScreamVention. ‘Cavity’ stars Karl Shiels, Danny Carvahlo and Elaine Daly. Speaking about ScreamVention Johnny described it as an amazing experience, “It was amazing to meet real legends of horror, Tony Todd who played Candyman, Ken Hodder who played Jason in the Friday the 13th sequels. It was inspiring sitting down having a coffee with Tony Todd about my movie and getting really positive feedback”. Johnny described himself a “major horror junkie, they’re all I’ve watched since I was five”.  “Hopefully ScreamVention will go on next year and for a million years, it was one hell of a ride, it’s the area of the industry that I really want to break into”.

Paddy Murphy started making films in April 2014, when he was working with Steve Spade in Spade Lion Productions in a management position.  It was at this time that Paddy had written a short story which Steve Spade recommended he turned it into a short film. “Though I had studied film in college, I never thought about going into making films”. Paddy’s first short film ‘Inflared’, was produced by Steve Spade and from there Paddy made more shorts. ‘Inflared’ was a psychological horror based on Paddy’s own suffering with depression in 2013. Paddy described ‘Inflared’ as his “release, trying to show what it felt like to suffer with depression, and being trapped in a loop”. After a year of making 3 shorts including ‘Devil on My Back’ and ‘Ground Floor’ Paddy was ready to step away and take a break from making films. However when Paddy met Brian Clancy that changed, Brian pitched the concept for a short called ‘The Three Don’ts” which “became bigger than we’ve ever expected, we’re working on a full feature now” “it’s mental but the support is there and the creative is there”. “I was always into horror growing up, as I got older and started talking to people who were into horror I just noticed we were all very similar and of similar backgrounds, really nice and generous by no means stereotypical of what people might expect. All these people into weird creepy stuff are the nicest and quietest people.” “Facebook and social media has introduced me into other horror fans and I’ve just fallen in love with the community. I want to keep making horror movies to keep giving the horror community new content and give back to the community that has given to me.” To Paddy ScreamVention was an amazing experience. “For me it was awesome just getting to sit back with Johnny and Steve and watch each other’s work and catch up with what we have all been individually working on”.

Steve, Johnny and Paddy were all delighted to be involved in ScreamVention’s first year. They look forward to the future of ScreamVention and hope to continue putting Limerick on the map.

Two Limerick films to be screened at Cannes Film Festival