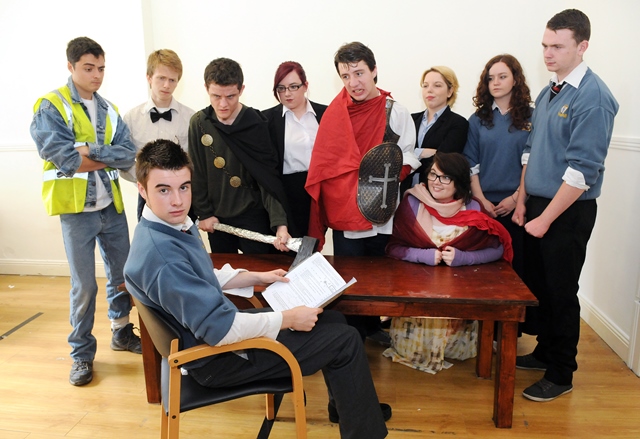 Anyone who’s been there knows the struggles and stress the dreaded Leaving Cert brings. Some seemed to fly through it like a piece a cake while some of us went through hell imagining the thoughts of failure. What if we were given a second chance though?  Would we have done it differently?

‘Time Travel and the Leaving Cert’ is a play written by Dermott Petty specifically for Limerick Youth Theatre’s summer show. It is a tale about a student who comes across a wormhole that allows him to time travel. The play deals with perceptions of what students are supposedly capable of, or not, the strange death like sentence the Leaving Cert is to some students,  amid the importance of following through and being true to your friends, family and most importantly your heart. ‘Time Travel & the Leaving Cert’ is the story of Eoin Kilmartin who is about to fail the Leaving Cert in spectacular fashion. His Dad believes him to be a total planker; the girl of his dreams Lesley doesn’t know he exists; yet by the strangest of reasons he may be able to time-travel to enable him to cheat the Leaving Cert.

This original and comic piece is being staged at 69 O’Connell Street, Limerick for three nights on 20th, 21st and 22nd of August at 7.30pm.

Dermott Petty said; ‘It is a great challenge and honour to be working with Limerick Youth Theatre this summer. LYT have a great tradition of nurturing young actors and it is especially thrilling to be working with them on the world premiere of ‘Time Travel & the Leaving Cert’. Acting requires courage and doing new works of theatre requires even more courage, with both, also demand ingenuity, hard work and above all a sense of fun. Hopefully we will deliver all these elements in this year’s show’.

Angie Smalis, Artistic Director of LYT commented; ‘With the Leaving Cert exams being somewhat a memory, LYT members, under the mentorship of a professional crew of theatre practitioners, are getting ready to present ‘Time Travel and the Leaving Cert’. It is written and directed by Dermott Petty, the man behind the script of ‘I have sex daily/I have dyslexia’ a short film produced by LYT in 2012 about dyslexia. This July and August, LYT members will be auditioning, creating, rehearsing, staging and performing this new piece of writing dedicated to the dreaded Leaving Cert. Past members will take up positions such as assistant directors and production managers, stagehands and prop-costume makers. LYT is delighted to return to 69 O’Connell Street to perform this original piece. We look forward to entertaining the general public by another spectacular show!’

This spectacular play will run for three nights, the 20th, 21st and 22nd of August. Will Eoin follow through with his plans and cheat on the Leaving Cert? There’s only one way to find out! Tickets are reasonably priced at €10. So don’t miss out! To get your hands on tickets you can call the box office on: 061 774 744 To read more LYT go to www.lyt.ie or click here!