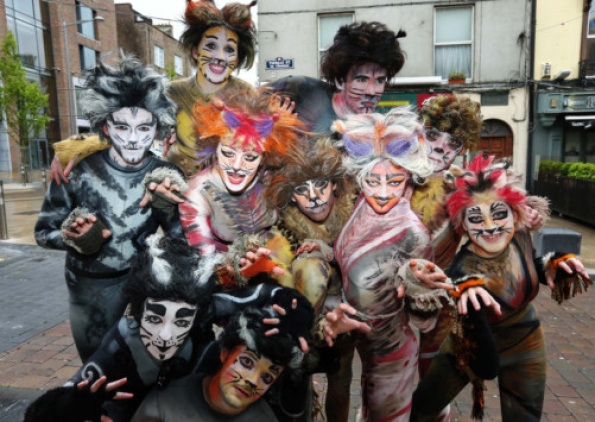 A brand new arts festival called the TomCat festival is set to brighten the city up during the June Bank Holiday weekend. Businesses in Thomas Street and Catherine Street have teamed up to create a festival, which will feature performance, music, DJs, dance, installation artwork, photography, craftwork, and film fiestas over the bank holiday. A series of events are being planned for the four day festival, with many reflecting the diverse range of businesses on the two streets. Marketed as ‘The Festival of the Curious Mind’, the TomCat festival is currently inviting submissions from art groups and individual wishing to get involved. The colourful launch of the event saw an impromptu performance from the Mary Immaculate College Dramatic Arts Society’s production of CATS, while there were speeches from Mayor Gerry McLoughlin, Karl Wallace, artistic director of Limerick City of Culture 2014, and Mickey Martin’s proprietor Deirdre Martin, of the organising committee. The festival started life four years ago as ‘Catdig’, in a bid to drive footfall in Catherine Street over what is traditionally a quiet weekend. But once Thomas Street came on board, the festival has taken on a new identity. It is hoped the event will generate positive coverage about Limerick and its culture both before and after. Ms Martin hopes all restaurants, shops, cafes and pubs will join “in a weekend of expressing ourselves through art in whatever format this would take.” Mayor McLoughlin selected a line from cat lover Mark Twain’s notebook, where he stated: “Of all God’s creatures, there is only one which cannot be made slave of the leash, and this is the cat. If man can be crossed with a cat, it would improve the man, but it would deteriorate the cat.”

More information on the festival: search for ‘Tom Cat Street Festival’ on Facebook.