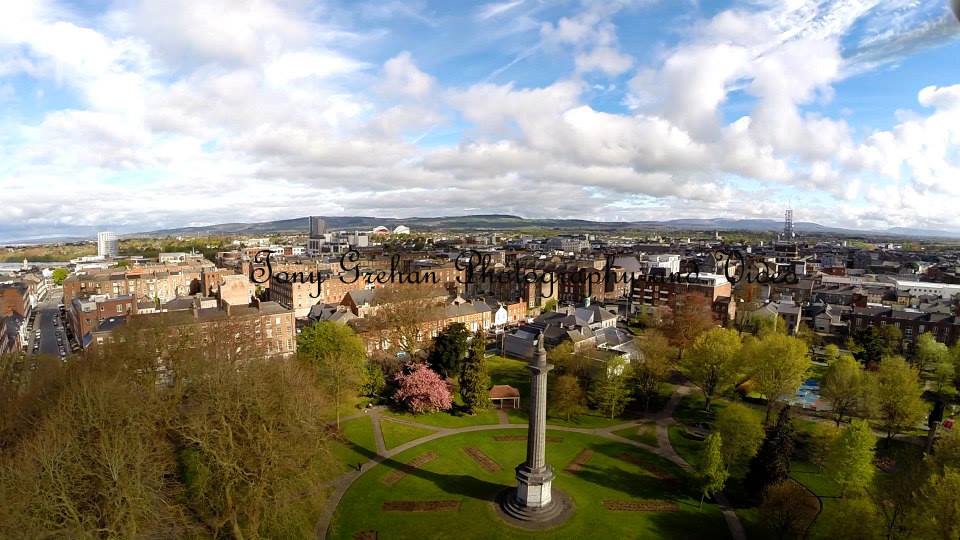 A shot of one of Limerick’s many urban art displays

Tony Grehan’s aerial shots are making a name for themselves around Limerick in light of the amazing footage he shot at both the Special Olympics Opening Ceremony, the Riverfest firework display, Limerick’s urban art, and the visit of Limerick’s Giant Grandmother with Royal De Luxe earlier this year.

A carpenter for 15 years before the crisis, Tony originally took up photography as a hobby, and instantly fell in love with it. He applied for an internship with a photography agency soon after the crash, and despite the 200 other applicants, Tony’s talent in the trade was spotted by the owners of the agency, who hired him for a nine month internship.

Thrown into the deep end, Tony learned to navigate the challenges of professional photography quickly, and took up contract work at weekends for a Clare paper, among others, and only a few months into his internship shot the first viral photograph of his career – the bending hurly.

Now two years into photography and editing his own footage, he also discovered his interest in videography, and film production, making Tony an all-rounder in the field. Despite the raging success of his aerial footage however, he hasn’t lost his roots, and still enjoys sports and candid photography. Nevertheless he’s on the lookout for new challenges, and is intrigued by the idea of filming sporting activities such as mountain biking or surfing with his drone, giving a more rounded view of the sports than the personal cameras athletes attach to their helmets.

For more information visit his Facebook page Tony Grehan Photography and Video and make sure to check out his Youtube channel here.

The firework display at Limerick’s Riverfest

The shot that went viral