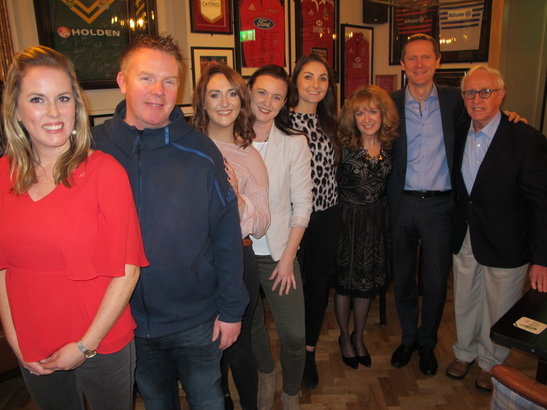 Pictured at Bobby Byrnes for the launch of the Torch Players ‘The Constant Wife’ playing at the Belltable from February 20 to 24, the cast of the show with director Maurice O’Sullivan (far right). Picture: Sophie Goodwin/ilovelimerick

Monday evening saw the launch of the highly anticipated Torch Players The Constant Wife at Bobby Byrnes, O’Connell Avenue just a few weeks before the play by W.Somerset Maughan opens at the Belltable from February 20 to 24.

Following the huge success of previous plays such as Bookworms, One Flew Over the Cuckoo’s Nest and Cripple of Inishmaan the Limerick drama group are back with the Torch Players The Constant Wife. With a star-studded cast including Miriam Ball, Sheenagh Murphy, Joanne O’Brien and Dan Mooney this charming play, set in the early 1920s is said to be of highly amusing nature, taking on topics such as marriage and infidelity with a quick-witted alternative way to deal with an extra-marital affair.

Constance Middleton’s husband is having an affair with her best friend, the ditzy Marie-Louise but in this comedy of unfaithful manners, Constance has surprising ideas of her own about extra-marital activity in the delightfully amazing play- the comedic manners will captivate all audiences.

The Torch Players play huge homage to their director, the great Maurice O’Sullivan who has claimed 40 best director awards and has set the Torch Players drama group up for 13 Irish finals since it was set up in 1976.

Speaking to ilovelimerick, Maurice O’Sullivan speaks of how he “evolved” the group, “I was teaching, and doing plays in schools with kids, and they all left school around the mid-70s, and I met one or two of them on the street around September ’76 and they said, ‘Will you do a play with us?’”

O’Sullivan says he choose The Constant Wife as the Torch Players latest production when he saw in the Gaiety Theatre, Dublin a few years ago and loved the play, and noticed how he could recreate it, as he felt he had enough strong females to cast, and that it was a “truly stunning play.”

The multi-award winning director pays homage to his cast, and members from the long-term members, to the newcomers that have joined the Torch Players drama group more recently, and touches on the meaning of the Torch Players, through “passing the torch to the new members.”

Speaking at the press launch, Mayor of Limerick City and County, Cllr. Stephen Keary spoke of the importance the Torch Players drama group has held in Limerick through the years, and said, “Limerick is better with the Torch Players.”

The Torch Players The Constant Wife will play at the Belltable from Tuesday, February 20 to Sat February 24, commencing at 8pm each night. Tickets can be bought online at the limetreetheatre.ie for €14 to €17.

For more on The Constant Wife at the Belltable, go here.

WATCH – Blues rockers, A Weekend Away newest single Irony is out now and ready for Limerick eyes and ears