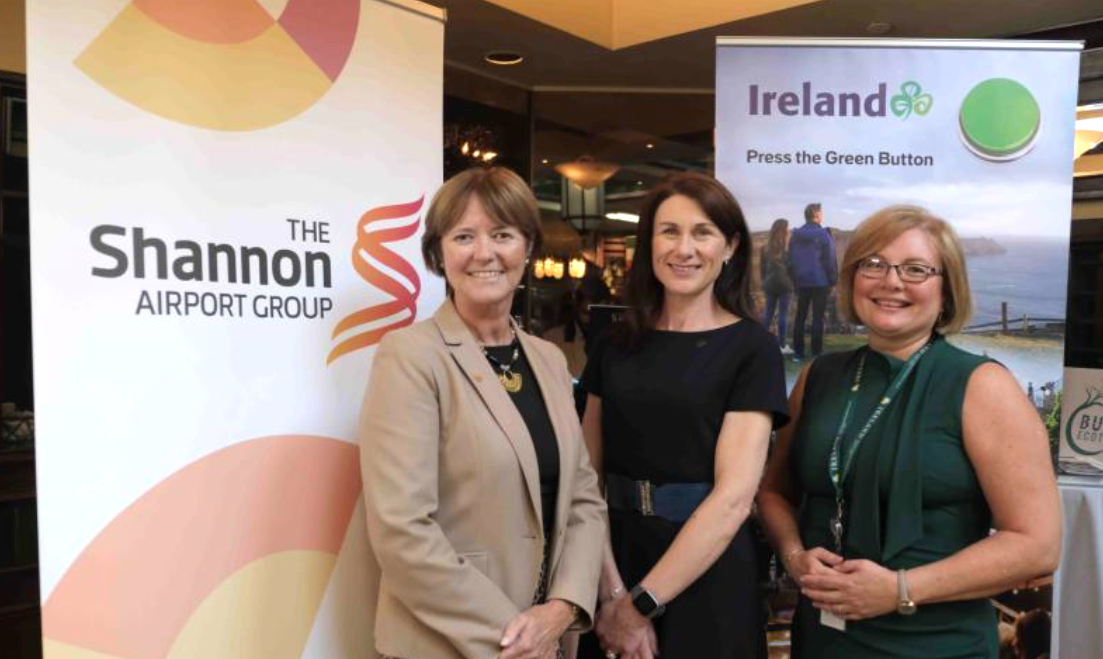 Tourism Ireland Shannon Airport campaign involves both groups hosting events together. Pictured above are representatives of both groups involved in the campaign

Tourism Ireland has launched a new €1m campaign to encourage American tourists to make use of direct flights from the United States to Shannon Airport.

This will promote direct flights from Boston and New York to the US as well as flights from Newark with United. It seeks to highlight Shannon as a gateway to the Wild Atlantic Way.

The Tourism Ireland Shannon Airport campaign involves both groups hosting events together for travel, trade and media contacts in New York and Boston this week.

Six tourism operators from across the Mid-West, including Adare Manor and The Savoy Hotel, will be among those attending. They will meet with around 40 tour operators, as well as travel and Diaspora journalists.

The Tourism Ireland Shannon Airport campaign will run until the end of November.

Alison Metcalfe, Tourism Ireland’s head of North America said, “Our campaign includes an extensive and targeted programme of both trade and consumer promotions. We know from our research that there is significant pent-up demand among travellers here to return to Ireland. We look forward to communicating with potential holidaymakers ‘as well as with our travel trade and media partners in the US’ highlighting the many great experiences and the warm welcome that awaits along the Wild Atlantic Way.”

Mary Considine, CEO of The Shannon Airport Group commented, “Shannon Airport is the lifeblood of our region and we are proud of the role we play in supporting the business, aviation and tourism sectors that are so vital to the regional and national economy.”

Mary Considine continued, “Recently rebranded as ‘The Shannon Airport Group’, we embark on our next chapter in shaping opportunities in aviation and property, and supporting our region as a thriving, connected place to live, work, learn, and spend vacation time. We look forward to continuing our special relationship with the US and reconnecting with our American friends and offering them the warmest of Irish welcomes and the travel and vacation experience of a lifetime.”

As well as the events in New York and Boston this week, Tourism Ireland’s new $1 million campaign will include feature digital outdoor ads on billboards in Boston, New York, and New Jersey as well as ads on popular digital and social platforms, Tourism Ireland Shannon Airport is also working with travel websites such as Travel Spike, Dunhill Travel Deals and ShermansTravel to promote holiday packages which will make use of Shannon Airport and the Wild Atlantic Way, co-operative marketing promotions with Aer Lingus and United will also be highlighted for their direct flight services.

For more information on The Shannon Airport Group, go HERE

For more stories on The Shannon Airport Group, go HERE