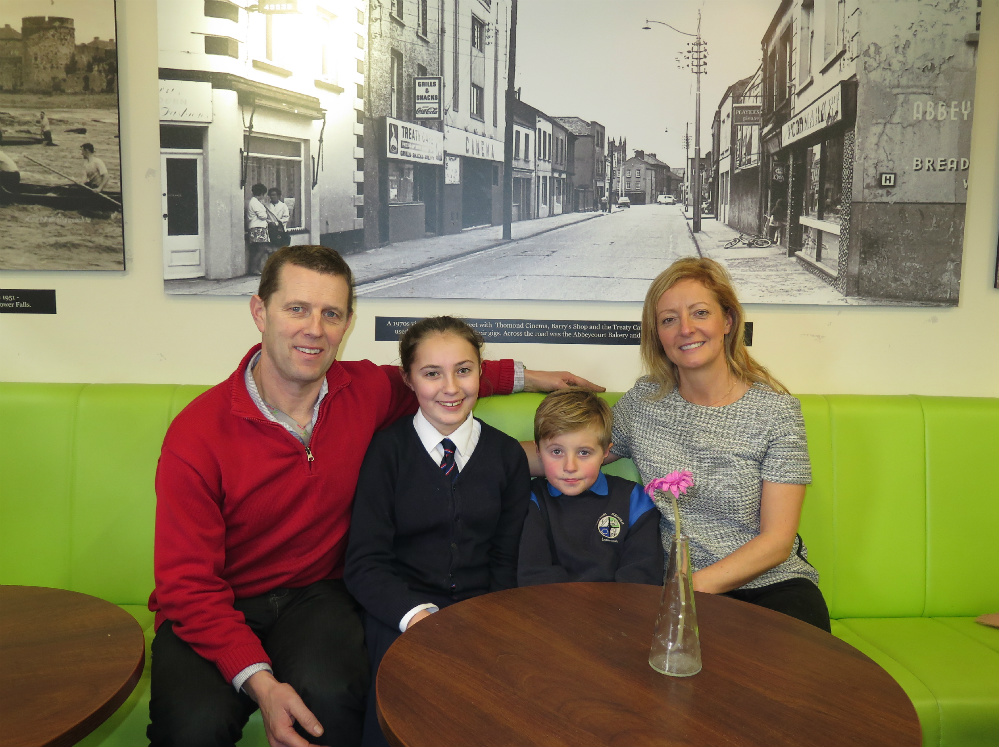 Tracey’s shop has been on Nicholas Street in Limerick City for over 50 years now. With the addition of  Tracey’s Bakery to the store in the last 5 years, business for Tracey’s Bakery and shop has been booming. Their unique and individual cakes freshly baked cakes and buns have been flying off the shelves and are in a very high demand. I caught up with the owners, Mike and Sheelagh Tracey, owners of the shop, to find out more about how this business began, how it lasted so long and where it’s going now.

How did the business begin and who came up with the idea?

Mike: “It really originated in 1963 when my mum and dad, Bernie and Paddy Tracey opened a shop about 200 yards from where the shop is now and they ran the shop from 1963 to 1997. Basically, it began as a family business, we used to live behind the shop. My mum would do the early shift 7 until 9 and my Dad worked in McMahon’s Timber yard. A girl would come in and work in the shop 9 until 1 and my mum would come back in again and they’d swap shifts until my Dad would come at 8 and work until 10 when the shop would close.”

When the shop first opened, do you remember what the business was like? How did it all take-off?

M: “When it originally started there was no bakery, it was more of a local convenience store. I remember, we were one of three shops to go for the Lottery and to get the Lotto. It was ourselves, Ivans and Mayes. No one really knew anything about the Lotto back then, so my mum and brother went for a meeting about this new concept, The National Lottery, and we got it. We were the first ones in Limerick with the Lotto machine, ourselves and those two other shops.”

When did you first take over the business and how did it come about?

M: “When my parents were reaching retirement age, I was working in Dublin airport at the time so an opportunity came and they sold the shop. I then opened up my own shop just up the street where the Polo shop is now. I basically moved the business, my parents shop closed and I opened mine on the same day just up the street. I stayed there from 1993 to 2004 and in 2004 we moved to where we are now and we’re still here today.”

Has business changed much since it first opened?

M: “Years ago, the street was completely different. When my parents had the shop we were on the main road and all the traffic came through Nicholas Street, this used to be the main road to Shannon, but now it takes a different route and goes around the Island. Traffic-wise, there has been a huge change, but the structure of the street hasn’t really changed. Obviously, the change in traffic has meant a change in business but back then there used to be 3 bakeries on this street and a few more shops. There is a history of bakeries on this street.”

Has the customer base changed much since when you first opened?

M: “Yeah it has definitely changed between word of mouth and facebook, we are getting people from all over the city, especially for our cakes. There is still a lot of locals, but they wouldn’t be coming for the cakes much. The cakes have drawn people from Patrickswell, Newcastlewest, Croom, Castletroy, it’s all over the city now. At the same time, people don’t know where we are even though we are here for over 50 years! The way the road structure is now, people don’t naturally pass through here unless they’re coming for the castle.”

What brought Tracey’s Bakery into your business and who started it up?

M: “Sheila plays a great part in the Bakery side of things. Tracey’s Bakery has really evolved as of recent. Shopping has changed over the years with the introduction of supermarkets and big chains, the trade has just changed totally. Gone are the days of the small convenience store. We started looking at ways of staying in business and about 5 years ago we started doing baking from scratch in store ourselves. We put more emphasis on baking and the deli and it’s actually taken over the business at this stage.”

Have you any plans for continuing the family business and expanding Tracey’s Bakery?

M: “Yes definitely, with our family and new generations such as the kids, we are continuing this on. We have plans to expand the bakery and deli side of things. We are overwhelmed with demand for the cakes and bakery, we are very busy at times. We are in talks at the moment of moving the bakery into a stand-alone are and adding more seating. We are thinking of expanding and going down the café route too. We intend on keeping the groceries and all the essentials but the food is the way to go.”

Sheila: “Recently we have been doing our own Turkeys and Hams and stuff, cooking them in store ourselves, we are going back to basics like they did years ago. People want traditional, they don’t want things being brought in anymore, they want fresh, homemade and traditional, proper stuff.”

M: “Even with the bakery we are finding people reverting back to older stuff like cream doughnuts, chocolate eclairs, trifles. It’s all going back to the old way”

S: “we are also looking into supplying businesses with fresh baked bread and stuff like that. We’ve had a few hotels interested too but we can’t do it until we make an expansion. It’s necessary really.”

M: “We are looking into taking on new people at the moment, we’ve advertised for another baker and more deli staff too. We’ve 13 staff at present full time and part time.”

The cakes at Tracey’s Bakery are very elaborate and creative, where did the ideas come from for the cake designs?

S: “we have set cakes, it’s primarily fresh cream cakes but you do have people with special requests like a different colour cream or adding a dove or a butterfly, things like that. We don’t just pump out batch cakes, they’re fresh, homemade and tailored. We cater to the customer as best we can.”

After meeting with Mike and Sheelagh Tracey, it was made clear to me exactly why their business has lasted so long. The Tracey’s have always kept up with the times and catered to the customer, between being one of the very first shops to bring the lotto to Limerick, to reverting to the basic fresh homemade produce of Tracey’s Bakery. This family run business has learned to adapt and progress with their business whether it be expanding the store or passing it onto the next generation.