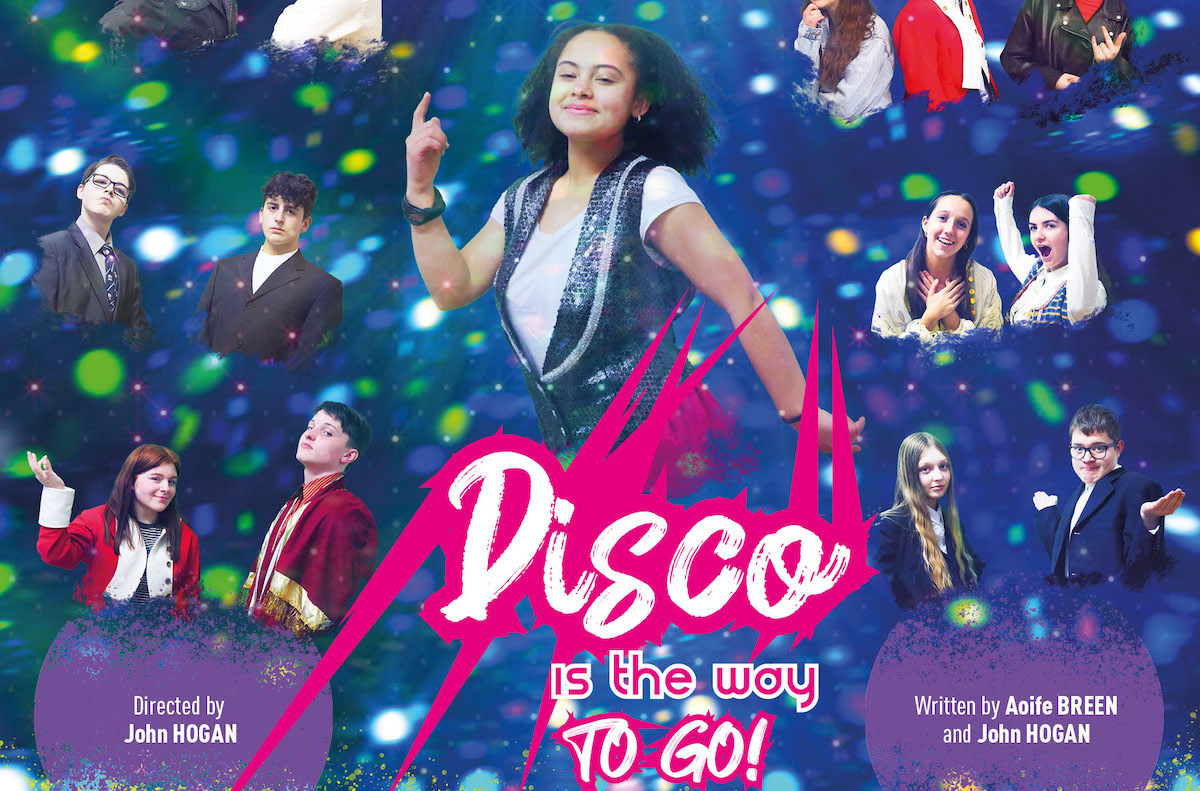 Transition Year Theatre Company is bringing  Disco is the Way To Go! to the Belltable on Tuesday, March 1 and Wednesday, March 2, 2022

Transition year students from schools in Limerick city and county pictured in rehearsals.

Limerick Youth Theatre’s Transition Year Theatre company proudly presents Disco is the Way To Go! directed by John Hogan. The play is co-written by Aoife Breen and John Hogan and tells the story of Rasputin and his rise to the height of Russian society. In the play, he becomes a close friend and advisor to the Tsar and Royal Family all being played out to a 70’s disco soundtrack. Working with 14 transition year students from schools in Limerick city and county, the play will be staged by the Transition Year Theatre Company at the Belltable on Tuesday, March 1 and Wednesday, March 2, 2022. The  Transition Year Theatre Company is being supported by two undergraduates, Aoife Breen and Cormac Laffan from MIC’s BA in Contemporary & Applied Theatre Studies who will lend their expertise to the production.

A mystery illness afflicts the Tsar’s son which some believe can only be cured by Rasputin – the disco dancing monk. However, some of the nobility aren’t as enamoured with Rasputin’s involvement. They devise a plan to assassinate him at an opportune moment. If that wasn’t enough for The Royal Family, the local punk rock band Lenin and the Revolutionaries plan to take over the country once they win the National Dance-Off competition! Through it all, Rasputin does not waiver as he believes Disco Is The Way To Go!

As the director says; ‘…even though it is easy to say this is Rasputin’s story, this is very much an ensemble piece. This is illustrated best by the fact that Rasputin features in less than half the scenes as many other characters also provide action and intrigue which influences the plot. It was also very important to me that each member of the cast got a fair share to do in the play so creating an ensemble was the best approach to take.

https://t.co/nVY3ZCPyb5
Limerick TY students are performing in this exciting new show in the Belltable. Well done to the TYs from Thomond and the other schools who are taking part in this. I'm going on Tuesday night 🙂 @LimerickYT @ThomondCommColl @BelltableLimk

Music also plays a big part in the play. I wanted to keep the story reasonably fun and light hearted and the 70’s soundtrack certainly helps with that. It also helps to exaggerate the social divides with classical music representing the royalty, disco for Rasputin and punk for the anarchists. Music helps us to reinterpret the Rasputin story and helps the audience not to take it too seriously either…’

Angie Smalis, Artistic Director of LYT further commented; ‘We, at Limerick Youth Theatre, are thrilled that we can offer TY students the opportunity to delve into theatre making and gain a valuable, hands-on work experience programme. The last few years have been challenging for the performing arts and although creativity is adaptable and versatile, it is wonderful to be able to provide in-house learning where the TYs learn from each other and present a fun piece of theatre to the general public.’

Limerick Youth Theatre is delighted to be able to run its Transition Year Theatre Company thanks to the generous support from Limerick City and County Council through its Social Intervention Fund and Limerick Clare Education Training Board.

Transition Year Theatre Company (TYT) is a special outreach programme offered to transition year students by Limerick Youth Theatre. The programme gives students interested in all aspects of theatre, a chance to stage their own production with a professional crew in an established venue in Limerick city.

Limerick Youth Theatre (LYT) is a company of young performers, dancers, writers to provide opportunities for young people from all backgrounds to cross social/cultural divides through youth drama experiences. It runs a two-year training course in theatre and performing arts.