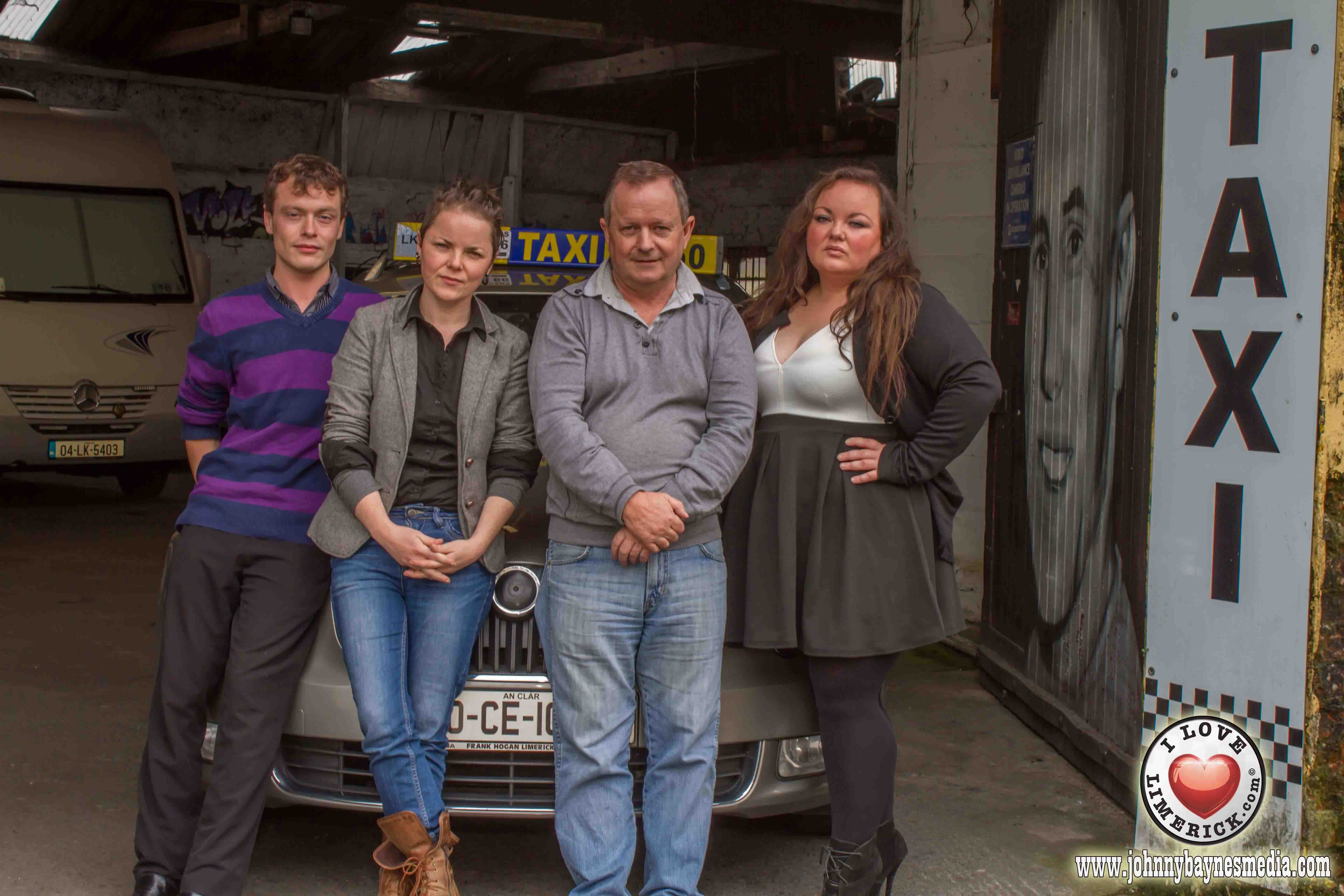 The Treaty Cabs family posing with Richard Lynch at their premises on Davis Street.

Limerick taxi company, Treaty Cabs celebrates 25 years in business this year, with the family-run company attributing their success to the customer-oriented atmosphere, along with the family vibe that they offer.

Jude Williams, owner of Treaty Cabs, located on Davis St, runs the business with the help of his three children, Ciara, Cian and Tara, who are always welcome company to their Father.

The company’s ethos is to provide their customer base with above standard service with a professional and welcoming feel.

The taxi service is undoubtedly a people-oriented business, with bonds being developed throughout the years. Cian, a second year Law and Accounting student in UL, said: “You build up patterns with people and from there you often develop a relationship. You find out their life stories and routines.”

Agreeing with her brother, Ciara said: “It involves so many people in your world. It’s just a mix of a job and friendship.”

Speaking about the connections formed and what can be learned about a customer over the years, Cian summed it up succinctly: “We’re cheap therapists.”

Jude, having driven taxis for 34 years and owning his business for 25 years, remarked on the timeline of people’s lives that can be witnessed: “You see a lot down through the years. You see your regular customers all the time. Even some who were babies when we first started the company who are grown now.”

When asked to share some thrilling stories, the modest Jude said: “It’s just an ordinary job really. Nothing too crazy happens. You usually just get in and you get out.”

While regulars and Limerick locals are the company’s usual fares, Treaty Cabs is no stranger to more high-profile clients, with Gay Byrne and Dana Rosemary Scallon having availed of their services. More recently, a well-known Miami DJ travelled with Cian and was suitably ‘unimpressed’ when he wasn’t immediately recognised, Cian joked.

Taking into account Jude’s comments on driving taxis as being an ‘ordinary job’, it is not surprising that, with the long hours and wide range of people encountered, the drivers have some entertaining stories that they were happy to share. Ciara spoke about one particular eventful evening at work.

“I was once, in a taxi, offered €10,000 to marry a Chinese man. I would have had to live in his home with his family and then the money was mine. I obviously didn’t take him up on the offer”, Ciara laughed.

After some reflection, Jude thought back over his 25 years of driving with Treaty Cabs and was able to share his own interesting tale: “A guy once got into the cab and said ‘follow that cab’. I had to ask him was he serious. When I asked where they were going he said he didn’t know. I followed it anyway and it turns out that he was trying to follow his wife.”

After amusing, strange and just plain odd stories, it is refreshing to hear a story that is sentimental, one that can make you realise the effect that a gesture of goodwill can have on a person.

While on a shift, a driver for Treaty Cabs passed an elderly nun who had fallen on Joseph’s Street, unable to get up. Stopping on the street, and ignoring the disapproving sounds of surrounding traffic, the driver helped the woman to the car and dropped her home.

Not having found out the driver’s name, the woman made calls to every taxi service throughout the Limerick area for almost a year in an effort to put a name to the face of the man who had helped her.

Ciara recalled the phone call she got from the woman a year after the incident: “This man has been on my mind almost every week for a year. He never asked me for anything, he just turned up out of nowhere.”

After describing the driver’s appearance and car, Ciara was able to identify the drive and together they ‘tricked’, arranging a meeting.

Driving out to the address given, expecting a regular fare, the driver was treated to tea, lunch and heartfelt thanks, returning to the office feeling humbled.

While most people get the chance to relax on a special day like Christmas day, Treaty Cabs, ever-focused on their customers, offers services on the day. The majority of fares on the day see the elderly travelling to cemeteries, out to visit the graves of loved ones. Cian spoke about their year-round service, saying: “People sometimes ask about us working on Christmas day, thinking that we’re being hungry. But at the end of the day, we’re helping people.”

Being the first taxi company in Limerick to hire non-national drivers, it is clear that diversity is not a forced element, but something that comes naturally to everyone involved in Treaty Cabs and its success. Ciara commented on the company’s forward way of thinking: “It came from outside the work environment, from our family and our own way of thinking. We wouldn’t treat anybody any differently for their race, ethnicity or religion. It’s just how we were brought up and it’s the motto we have here.”

Dedication, perseverance and genuine care for their customers seem to be the core factors that made Treaty Cabs what it is today, and with Jude, his wealth of experience and three dedicated children on hand, it is safe to say that the company’s success will continue for years to come.