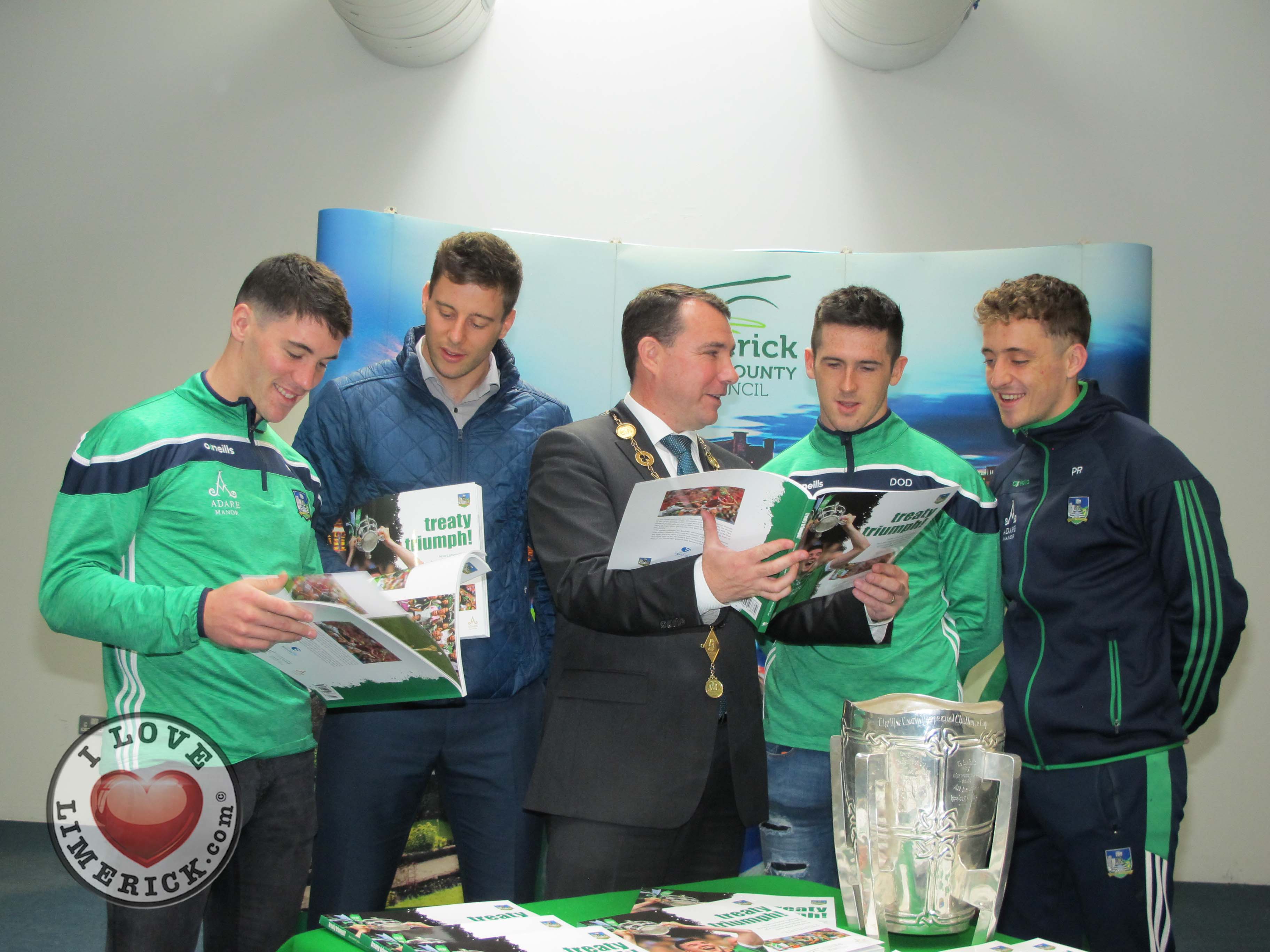 ‘Treaty Triumph!’ set to become one of the biggest stocking fillers this Christmas

Treaty Triumph, the book is launched on Tuesday, October 16. In the book, the Sportsfile team of photographers, in conjunction with writer Damian Lawlor and the Limerick players, retrace each step of the great odyssey, from a pre-season match on a raw December night to the white heat of an All-Ireland final in August and finally to the warm glow of the throng that greeted their heroes in Croke Park, and the homecoming in Limerick. Picture: Baoyan Zhang/ilovelimerick

‘Treaty Triumph!’ set to become one of the biggest stocking fillers this Christmas

A stunning photographic memoir that paints a vivid picture of Limerick’s magical odyssey to the hurling summit has been unveiled today with the launch of ‘Treaty Triumph!’.

Produced by the country’s leading sports photographic agency, Sportsfile, the superb pictorial parade that tells the story in over 200 captivating images of the unforgettable year for Limerick hurling fans was officially launched by Mayor of the City and County of Limerick, Cllr James Collins.

Sponsored by Limerick City and County Council, the 168-page book is made up of images captured by Sports files team of photographers as they followed Limerick from their December 30th 2017 victory over Cork in the Co-Op Superstores Munster Hurling League right through to the All-Ireland Final.

Produced in conjunction with celebrated GAA writer Damian Lawlor and the Limerick players themselves, the book is on sale from tomorrow at all usual outlets and is priced at just €19.95.

Launching the book, Mayor James Collins said:  “It’s fair to say that August 19th last is embedded forever as a memory in the minds of all Limerick hurling fans, indeed all Limerick sports fans.  We will always remember where we were and how we felt when the final whistle went in Croke Park.

“However, this book will stoke that memory for a long, long time to come.  It’s a pictorial tribute that somehow does great justice, thanks to the outstanding work of Sports files photographers, to a story that takes some telling.”

Said Ray McManus, founder of Sportsfile:  “I have worked with our staff over the past 21 years producing A Season of Sundays and while Treaty Triumph! is a little different, it is one of the best books we have produced.  It really captures the true spirit of the game of hurling and the efforts of the Limerick squad and indeed of their massive band of supporters. We are all grateful to the Mayor and his officials for supporting Treaty Triumph! as the Council’s support will allow the book to sell at a very competitive price, €19.95, and support the player’s fund at the same time.”

Said Limerick GAA Secretary Mike O’Riordan:  “In our lifetimes, it will be hard to have a year, and a single moment like what we all experienced on August 19th last, that we will enjoy and remember as much as this.  Having this brilliant photographic memoir to bring us back to all those great moments is a great gift and I’ve no doubt it will be one of the most sought-after stocking fillers this Christmas for Limerick folk across the world.

“The proceeds from this will go to directly back to Limerick GAA and we are very grateful to Limerick City and County Council for getting behind this book and enabling us get it to market for just €19.95.”

Treaty Triumph is available from all good bookshops and online from www.sportsfile.com

Related Topics:Limerick Hurling
Up Next