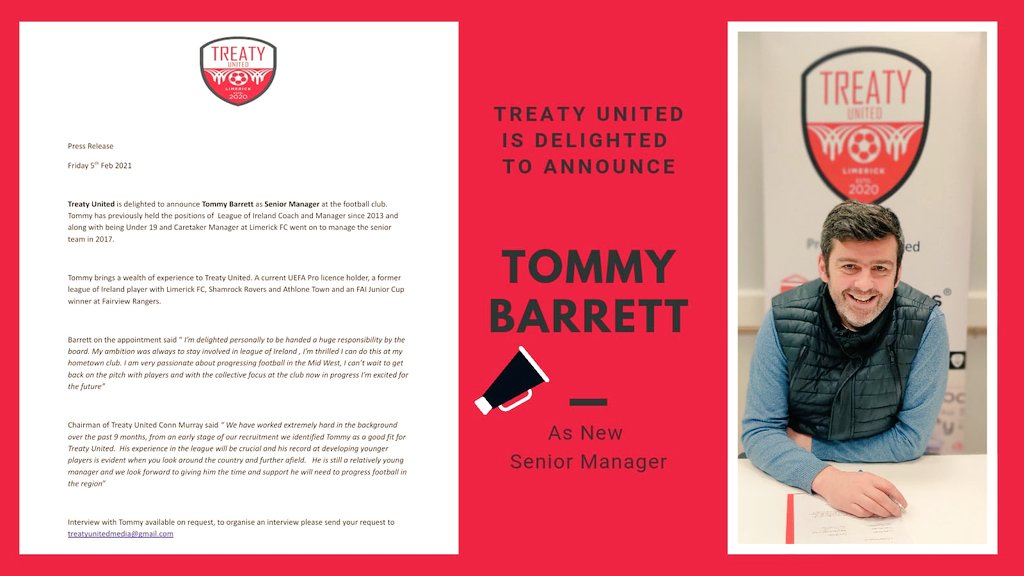 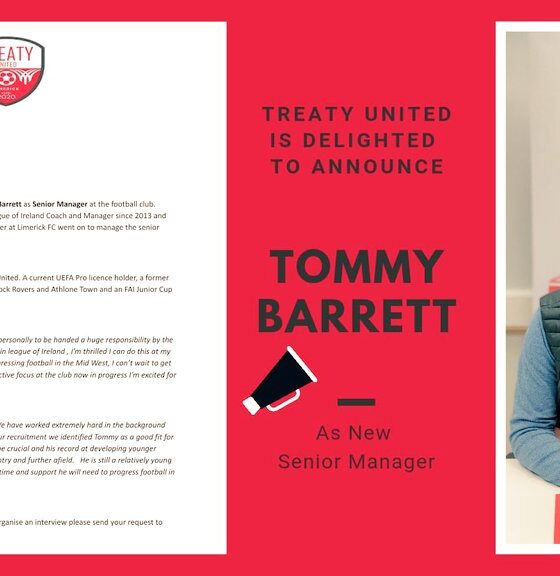 Treaty United is delighted to announce Tommy Barrett pictured above as Senior Manager at the football club.

Treaty United Football Club is an Irish association football club based in Limerick. The club was founded in 2020 in the place of Limerick F.C., following their financial collapse. The Limerick club is ready to step up and make a mark in League of Ireland football as their waiting game continues.

Recently appointed senior manager of Treaty United Tommy Barrett says the Limerick club needs to know soon whether they will be part of the SSE Airtricity First Division this year.

The fixtures for the 2021 season were confirmed last week, with one vacant place for a club awaiting a license.

It is believed that Treaty are frontrunners to replace Shamrock Rovers B as the tenth team but, for now, the Limerick club is in limbo.

An announcement on the lineup of clubs for the new league season is expected on February 23, but with the league starting on March 27, time is of the essence for manager Tommy Barrett who is awaiting to build a team and begin training for the competitive season.

Following the liquidation of Limerick F.C, the idea of a new team in Limerick arose. The idea of Treaty United came about because Limerick is also known as the Treaty County.

Treaty United was confirmed as the name, and the women’s team was ready to enter the 2020 Women’s National League season and the men’s the 2020 League of Ireland First Division, but the men’s team pulled out of the 2020 season.

The club gaining entry to the League of Ireland would provide much-needed buzz around the county, for Limerick people who have been yearning for a club to support since the fall of Limerick F.C in December of 2019.

Barrett has recently spoken to RTÉ Soccer podcast saying, “Hopefully we can get in. We just need to know. Even in today’s announcement, it doesn’t clarify what date people are going to find out.”

“The lack of communication and clarity is the problem. I know the FAI have a tough job on their hands, and they have to go through due process, but for all the stakeholders we need to clarify the date. It’s getting closer now, it starts on March 27 and you have to put a team together and get training.”

“When there is no clarity, rumours start and that creates a toxic environment. That’s not good. Let this be the last year this happens. It can’t keep happening all the time.”

For more information on the League of Ireland HERE

Related Topics:Treaty United
Up Next