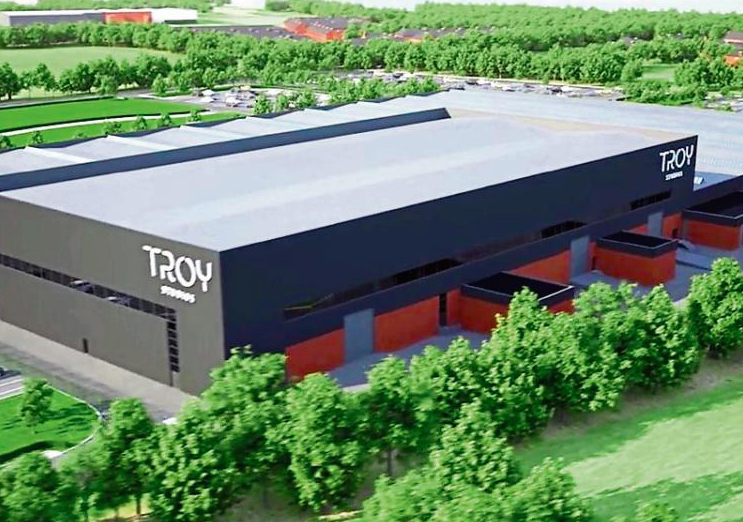 A computer generated view of Troy Studios building after its construction and refurbishment which is expected to finish early next month.

Troy Studios building in Limerick is expected to be complete in early to mid September once construction and refurbishment work is done.

Innovate Limerick, Mike Cantwell, the council’s investment arm that was vital to completing the Troy deal to build in the former Dell building in Castletroy. “The construction is at an advanced stage and is due for completion in early to mid September,” he said.

In order to deal with international bookings, Troy Studios has linked with Pinewood On Location and has 340,000 sq feet of top of the range sound studio and support appliances for film and television productions. It has since been seen by well-known producers since the deal was mad last summer.

The council bought the building through LCO Enterprise Development Limited for around €8m and is currently restoring the building with Troy signing a 20 year lease.

Mr Cantwell has said to the Limerick Leader that it is a ‘world class facility’ with people visiting the site from across the globe and the feedback is that ‘there is nothing like this’. All facilities are under one roof.

Of potential production bookings, he said: “We are not aware that any particular production has signed up yet, (but) I think that is only a matter of a short time.”

Last week, the council had announced that they were buying the former biblical centre on Dominic Street for €2.25m to create a production and digital skills academy to merge with opportunities created by Troy. Council CEO Conn Murray has said it could create 750 jobs and could result in €70m for the local economy.

Mr Cantwell intends to host an open day in September to welcome any groups interested in the Troy Studios building. It would mean inviting everyone from the region that is interested in working in the area to meet Screen Ireland, the Film Board and all the active parties in training and show their skills. If successful, Troy studios are hoping to provide training course to prep people to go in and work.

The studio is hoping to employ up to 500 staff employed during production, 6-10 full time core staff on site, which typically lasts 3-9 months depending on the project.

For more information about Troy Studios check out their website here.

For more stories about Troy Studios from I Love Limerick click here.