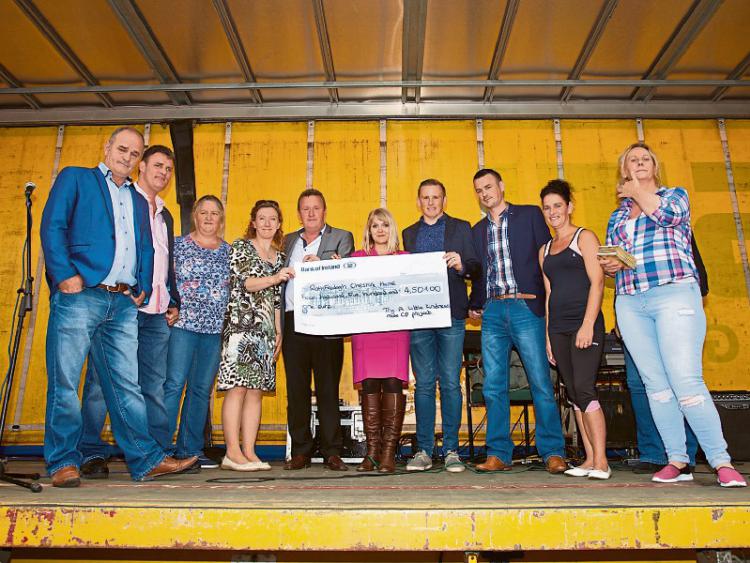 ‘Lean on Me’, a documentary made by Keeshla Communications based on ‘Try a Little Kindness’ CD Fundraiser has now been released.

The brief description of the documentary reads, “This is the story of 4 men – all from the one family – from the travelling community all of whom have been deeply affected by suicide as they attempt to record a CD of songs to promote suicide awareness.”

The cheques went directly to Rathfredagh Chesire Home, a residential home for physically challenged people just outside Newcastle West and to Limerick/Tipperary Samaritans. The idea for a compilation of songs for a CD initially came from Willie Harty, an Askeaton native concerned about the high incidences of suicide among the Traveller community.

The idea for a compilation of songs for a CD initially came from Willie Harty, an Askeaton native concerned about the high incidences of suicide among the Traveller community.

Mr. Harty finally established a solid plan for his idea when he met with workers on the West Limerick Primary Healthcare Project for Travellers last year.

“I had an unreal sense of helplessness. We had an idea to do something with horses but that just wasn’t practical. I did a bit of singing myself and other Traveller men I knew loved to sing, so out of this the idea to record a CD for suicide awareness was born,” Mr Harty said.

The CD is compiled with a list of catchy country songs with the aim of promoting positive mental health and encouraging people at times of hardship that help is there and to avail of it. The CD features brothers Willie, Christy and Danny Harty along with their nephew Eddie.

A €4,501 donation was presented to Rathfredagh at their annual Garden Fete earlier this month with a further donation of €340. A cheque for €1929 was presented to John Downey, director of Limerick Tipperary Samaritans.

“A lot of hard work and effort went into the making of the CD and there is great credit due to them, their family and the community,” a spokesman for the organisation said.

You can listen to the ‘Lean on Me’ documentary below.