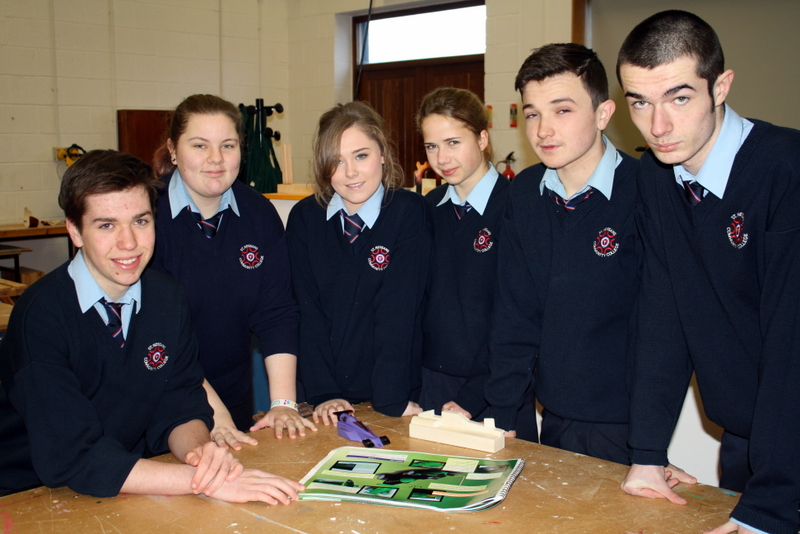 On the 3 of March 2015, the Regional Finals of the F1 in Schools Technology Challenge will take place at the University of Limerick. The Turbo Titans made up of Hannah Müller, Kim Kiely, Adam Slater Buckley, Jake Sheehan, Britney Ryan and John O’Mahony secured a place for their school, St. Nessan’s Community College in the Regional Finals.  The Transition Year team were very pleased that their hard work in research and preparation for their project plan had paid off, securing their place in the finals.

The competition has been running for over a decade in Ireland under the guidance of the Irish Computer Society (ICS) in partnership with Discover Science & Engineering. The St. Nessan’s Community College Transition Year group are also the only team in Limerick City and County to have qualified.

F1 in Schools is a national competition open to all secondary schools. The competition sees teams design and manufacture a 25cm long, compressed air-powered F1 racing car. Student teams compete against each other in Regional and National Championships to determine the best-engineered and fastest car in Ireland. The winning car will be judged on design, speed and the school team’s full project presentation.

This is the fifth year that the school has been involved in the competition and have enjoyed great success so far. In 2010, Team Cheetah, won the “Marketing and Communications” category at the National Finals and three years ago, Team Mustang won first prize in the “Best Website”. In 2013, Team Blazing Bullets also won ‘Best Website’ at the Nationals which was a massive achievement given the competition for this category. The school has also achieved prizes at Regional level for the best use of Information and Communications Technology.

This year’s group have already added to this success by qualifying their team for the Regional Finals. They hope to add to the past successes by winning more prizes at the Regional and National Finals.

Marketing and Communication Manager of Team Turbo Titans, Jake Sheehan describes the work the team has put in so far to get to this stage in the competition:

“We are very happy to have qualified for the Regional Finals. We have put hours of hard work into all aspects of this project. We feel very privileged to represent our school and city in a positive way in this competition.”

The Qualifying Stage consisted of a five page plan on how each team intended to create their 25cm balsa wood Formula One™ car by showing their research, proposed budgets, designs etc.

Team Manager of Team Turbo Titans, Hannah Müller explains why she thinks that, not only do they deserve to get through to the National Finals but why they deserve to win also:

“We have taken a lot of interest in this competition and are very proud to have made it to the Regional Finals. Being our first year in the competition we didn’t know much about it in the start but, we have learned lots of stuff about F1. We would love to get through to the National Finals and if we won it would be a great accomplishment for our school and ourselves. “

The team would like to acknowledge their sponsors Modular Automation who have supported them for the last three years. The Moyross Community Enterprise Centre, EuroBlinds, B&Q, Thomand Tyres, Caherdavin Credit Union, RT Communications and McElligott’s Transport Services who have also generously sponsored them this year.

You can visit the F1 in Schools website here and you can check out the Turbo Titans’ site here.
Why not follow them on Twitter here and like them on their Facebook here to keep up to date with their progress.
You can read more on science here.