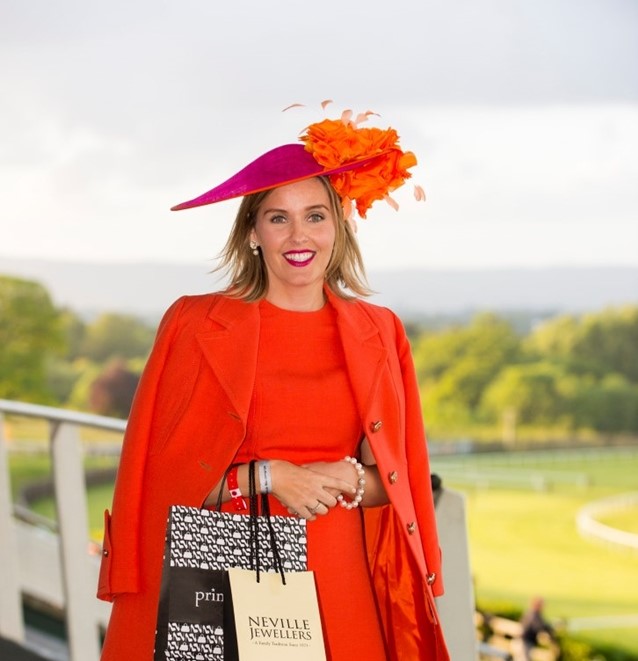 Picture above: Karen Wright from Kinsale, Co. Cork winning the Crescent Shopping Centre Most Stylish Lady Competition on the opening Twilight Race Evening last year. Karen wowed the judges in a colourful vintage orange dress complete with matching coat and a fuchsia/orange hat to complete the look. Karen revealed that her winning ensemble was actually her mother’s going away outfit after her wedding in 1973. Twilight racing 2016

Limerick Racecourse is delighted to announce details of the upcoming Twilight Summer Racing Series for 2016 at Greenmount Park.  The Twilight Racing Series takes place on Saturday 11th June with a live performance by the Lemon Suckers after racing. It’s the turn of The High Kings on Friday 17th June, while on Thursday 21st July country music star Johnny Brady will take to the stage to end the summer season in style at the Patrickswell venue.

There is a cracking seven race card in store on Saturday 11th June for people to enjoy the thrills and spills of National Hunt racing before popular Limerick band The Lemon Suckers will take over Greenmount Park with their unique blend of Soul Funk and Rock and Roll for the post-race entertainment.

While it it’s the turn of Irish ballad group The High Kings, who have been confirmed to play at Limerick Racecourse final flat racing fixture of the summer campaign. The High Kings who are made up of Finbarr Clancy, Brian Dunphy, Martin Furey and Darren Holden are from accomplished Musical pedigrees. The High Kings grew up in households soaked in Irish Musical tradition and each member of the band has witnessed first-hand the power of well-crafted Irish music on an audience and they are guaranteed to take Limerick Racecourse by storm when they take to the stage on Friday 17th June.

Sintija Zorge from the Holman Lee agency help launch the Summer Style Sessions at the Crescent Shopping centre and most Stylish Lady at the Twilight Racing in Limerick Racecourse.

The Twilight Summer Racing Series at Limerick Racecourse draws to a close in style on Thursday 21st July with a superb Nation Hunt fixture.  Country music sensation Johnny Brady who has become a household name on the country music scene in Ireland will take to stage with his live band who provide an energetic performance teamed with immense talent and charisma worthy of a star, the ‘Johnny Experience’ is a must see for 2016.

Conor O’Neill, General Manager of Limerick Racecourse “I’m really excited about the 2016 Twilight Summer Racing Series which is a firm favourite on both the racing and social calendars, where some of the best entertainment on offer this summer is guaranteed. Whether it is top class racing, live music by some of Ireland’s best performers, fashion, superb hospitality or a fun night out, Limerick Racecourse has something for everybody and is definitely the place to be on Saturday 11th, Friday 17th June or Thursday 21st July. Check out www.limerickraces.ie for further details”