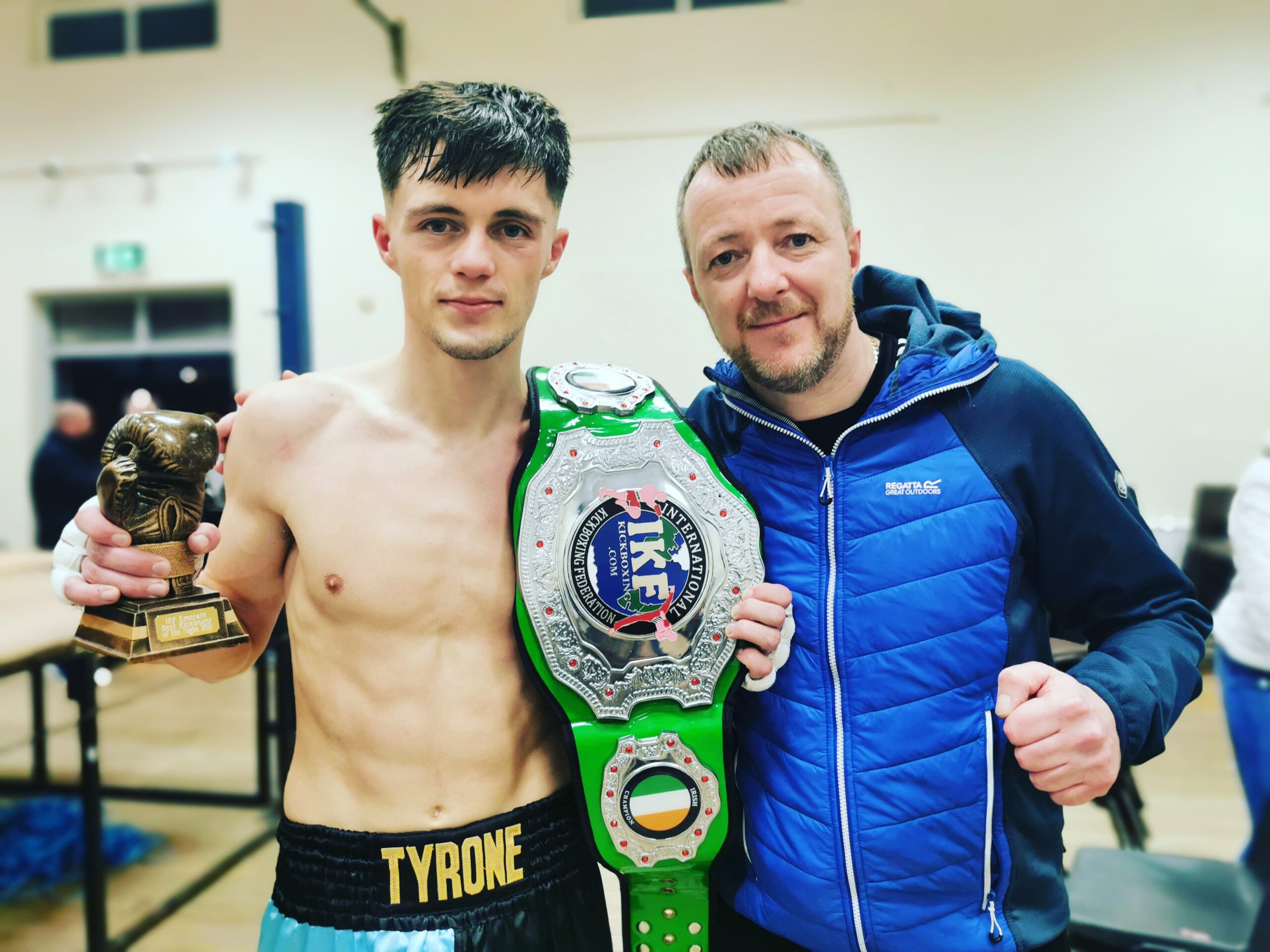 Tyrone with Colin Koyce of Hub Martial Arts who won his first-ever K1 fight at the kickboxing tournament.

It was a fantastic achievement for coach and father Paul O’Brien to hear ‘Tyrone Cronin O Brien wins the IKF All Ireland Super Lightweight Title.’

The fight took place on Sunday, November 21 in Mooncoin, Co. Kilkenny. Tyrone was up against Mayo’s Jack Hughes for the title and won it with ease.

The battle was supposed to last for five 2 minute rounds, but Tyrone dominated the first round and showed some beautiful skill that had his fans lifting the roof of the venue with cheers, and went on to win via knockout in the second round and claimed the Best Fighter of the Day.

His dad, chief instructor of Hub Martial Arts, Limerick, said it was, “one of the best KO’s of the year.”

The recent win makes this Tyrone’s fourth Irish title in two different weight categories, and the young Limerick man is quickly becoming one of Ireland’s rising stars in the martial arts world.

He has won his titles across three different disciplines of martial arts, including low-kick kickboxing, K1, and kickboxing, and a gold medal from the Unified World Kickboxing Championship which was held in Italy.

“All this experience and future experiences to come will be key to my development and progression as a fighter to achieve my goal of being a high-level professional,” Tyrone said.

The Limerick man began competing in kickboxing at 17 years old, and had approximately 30 fights within the 4 year period, including almost 2 years off due to Covid.

“I have been a very active fighter from the start but without the activity, I wouldn’t be where I am at now,” Tyrone explained.

He trains out of Hub Martial Arts (HMA) on New Read, Kileely, under the guidance of his dad, Paul O’Brien.

“Tyrone’s work ethic and hard work has inspired the younger generation of our gym. He has an unbelievable discipline and always thrives to be the best he can be. He has achieved so much so quickly, and to think this is only the start of his career is amazing. I look forward to seeing what the future holds for this young athlete. I am extremely proud of him as a coach and also as his dad,” Paul said.

For more about kickboxing at The Learning Hub go HERE