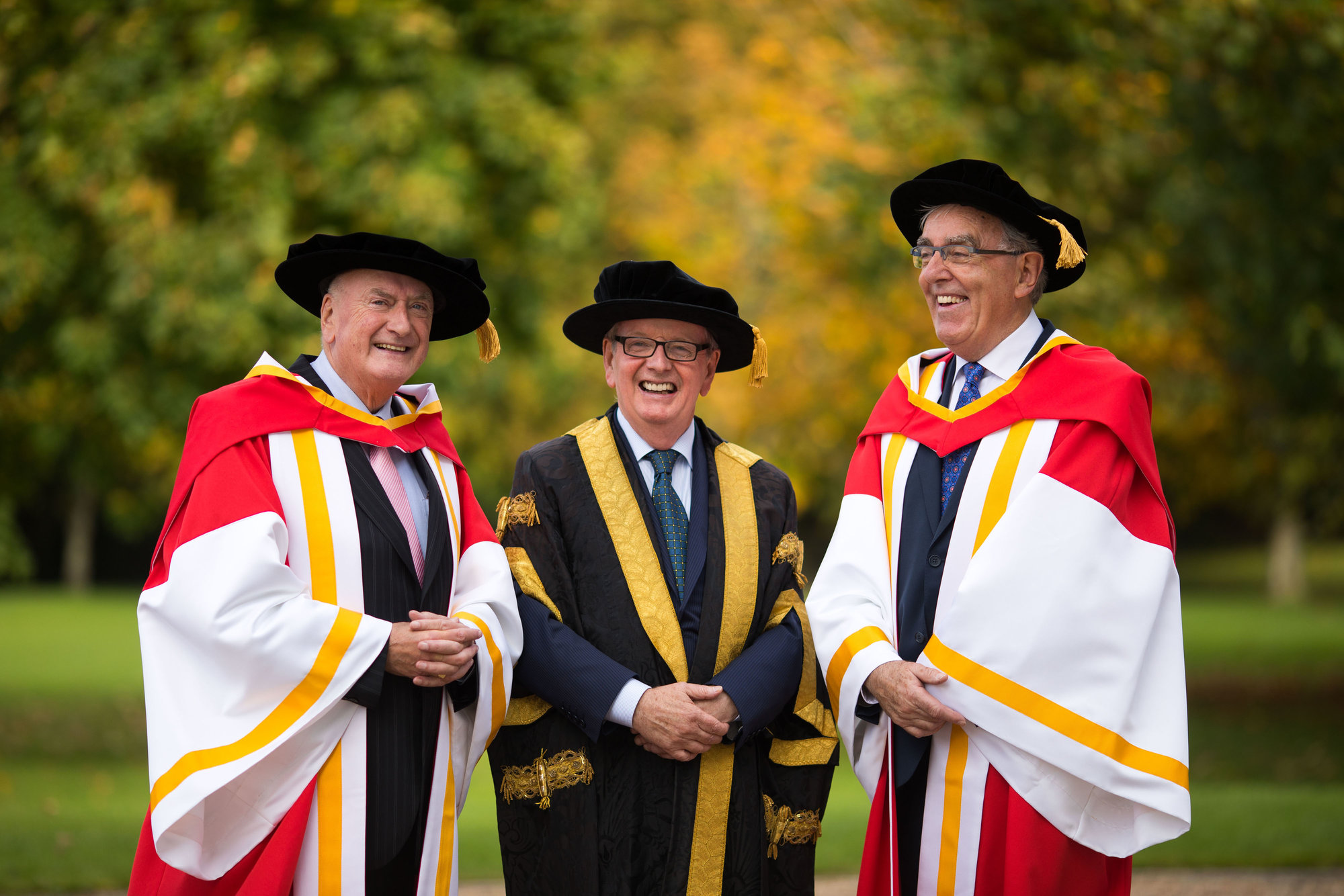 Books and music formed the backdrop to the UL Honorary Conferrings 2017 today as historian and author George Cunningham and Irish Chamber Orchestra (ICO) Chairman Michael Buckley were conferred Honorary Doctorates of Letters at the University of Limerick.

UL President, Dr Des Fitzgerald said about the UL Honorary Conferrings 2017: “The bestowing of a UL honorary doctorate represents the opportunity to honour those who have inspired, and worked tirelessly to make great contributions in their fields of endeavour. Today, we honour two such men who have made unique and powerful contributions to history and the arts in this country.”

“George Cunningham has spent his life preserving and creating books, he fosters a love for literature in everyone around him. His contribution to preserving local history in Tipperary and Clare is immeasurable.  Michael Buckley has deployed the experience of a distinguished career in public and private sectors to benefit a range of national initiatives, in particular, the development of the ICO with its vision of artistic excellence coupled with social transformation.”

In addition to publishing more than 100 books and articles, George Cunningham has collected over 25,000 volumes but has given away more than three times that to schools and other institutions. Recipients of his books include Coláiste Phobal Ros Cré, the Tipperary, Offaly and Laois library services and the University of Limerick’s Glucksman Library.

Born in Roscrea in 1940, George Cunningham was awarded a secondary scholarship to St Flannan’s College in Ennis, County Clare. George then went on to graduate from St Patrick’s College, Drumcondra as a primary school teacher in 1961.

George played a major role in the establishment of the annual Burren Spring Conference in 1991. Two years later, he contributed to the founding of the Burren College of Art in Ballyvaughan.

George went on to successfully lead a campaign for the preservation of Damer House, a Queen Anne townhouse built within Roscrea Castle in 1720, before opening it to the public as a national monument. Following this, George spearheaded many restoration projects including the Damer House Annex and Roscrea’s round tower.

George retired from teaching in 1987, and in the same year he founded the Roscrea medieval conferences, which brought together national and international scholars to present on learned aspects of Early Christian Ireland and the later Middle Ages.

George served on the UL Governing Authority from 1992 to 2009 and fulfilled the role of deputy chairperson from 2003 to 2007. As chair of the Library Development Committee and a member of the Library Building Committee, his campaign to champion the library’s expansion culminated in the opening of the 9,170 square-metre Glucksman Library in 1998. George was responsible for the acquisition of the antiquarian libraries of Eamonn Norton, Fr John Leonard and Ciarán McAnally and was influential in securing the personal papers of the writer Maurice Walsh and the Armstrong Family of Moyaliffe Castle, County Tipperary. George was also a member of the initial design team for the redevelopment of the Glucksman Library – an inspiring, 15,000 square-metre facility due to open in early 2018.

The Irish Chamber Orchestra at the University of Limerick has gone from strength to strength under Michael Buckley’s stewardship since he joined the board in 2005.

Born in Cork in 1945, Michael Buckley obtained a first-class honours degree in philosophy and political theory from Maynooth University and later went on to complete a Master of Arts and a Licentiate in Philosophy. His employment at the Department of Finance as a civil servant in 1967 marked the beginning of a long and distinguished career. Over the course of the next ten years, Michael combined his civil service work with teaching political theory to evening-degree students in UCD.

Michael Buckley was born in Cork in 1945. He obtained a first-class honours degree in philosophy and political theory from Maynooth University before completing a Master of Arts and a Licentiate in Philosophy.

In 1977, Michael was selected as chef de cabinet for the president of the newly created European Court of Auditors. He spent the next four years in Luxembourg, where he played an important role in establishing the ECA, now a key institution within the European Union. On returning home in 1981, he took up the role of assistant secretary at the Department of Social Welfare.

Michael became involved in creating and developing the International Financial Services Centre, which was established in 1987.  Michael then joined AIB, where he played a leading role in internationalising the bank until his retirement in 2005.

Michael then spent nine years with the Dublin-based energy and distribution group DCC, including six years as CEO.

Michael was also the founding chair of the 30% Club Ireland, an organisation committed to achieving 30% female representation among senior management in leading Irish businesses.

With Michaels leadership, the ICO has raised €1.2 million over the past eight years to fund the socially transformative Sing Out with Strings programme with Reaching out to the most disadvantaged schools in Limerick city since 2008, this community engagement initiative provides more than 300 students with free tuition in singing, song-writing, violin, viola, cello and double bass three times a week. Michael’s passion for the programme is evidenced by the fact that he has attended almost every one of its concerts.