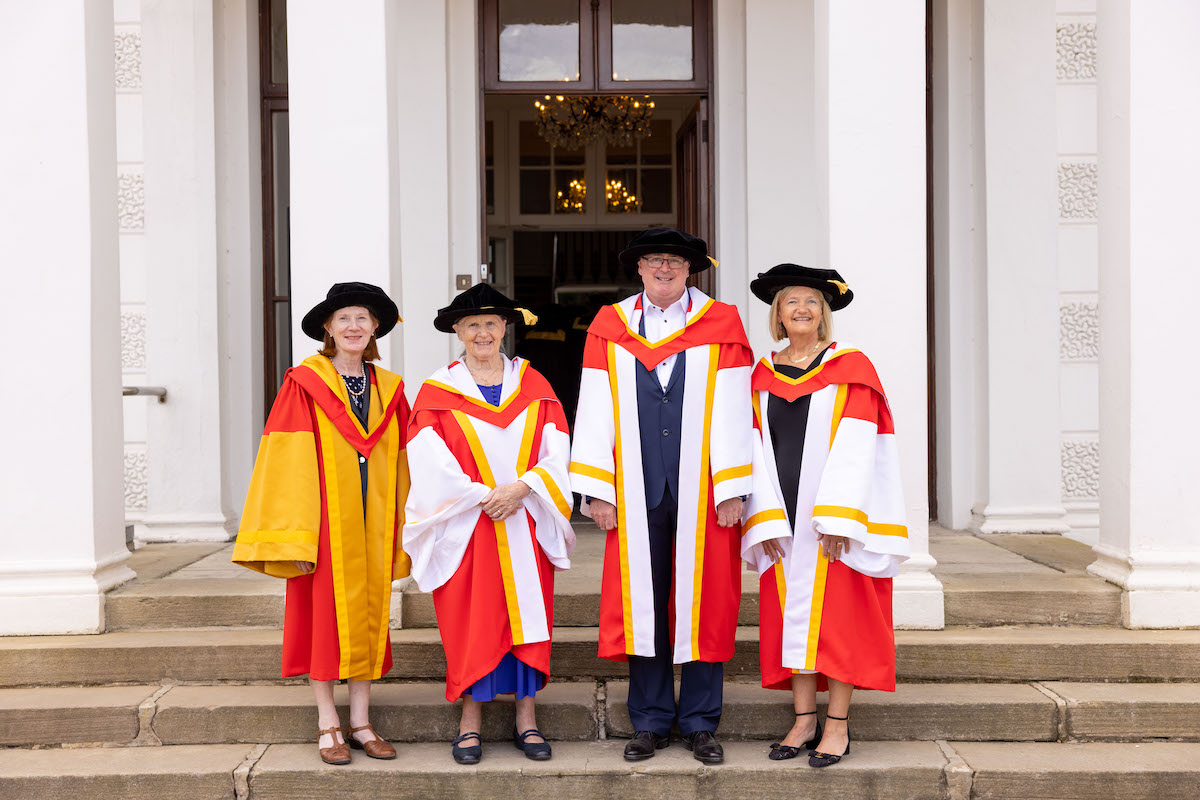 Leaders from the worlds of sport, advocacy, science and politics donned cap and gown in Limerick as they were conferred with honorary doctorates by the University of Limerick.

“The bestowing of an honorary doctorate represents the opportunity to honour those who have inspired and worked tirelessly to make great contributions in their fields of endeavour,” said University of Limerick President Professor Kerstin Mey.

“We honour four such individuals who have made unique and powerful contributions to history, charity, sport and science in this country.

“Indeed, the recipients of the 2022 UL honorary doctorates are great role models for all of us who show us how purpose can be built and how change can be engendered. They embody the art of making questions, the art of making solutions, and the art of making networks, key ingredients for thinking sustainably and acting with conviction and courage,” Professor Mey added.

The recipients joined the wider ceremonies taking place this week, with almost 3,300 new graduates being conferred at UL over five days of the 2022 Autumn Conferring.

Congratulating the recipients on behalf of the Governing Authority of the University, Chancellor Mary Harney said the awards were to honour the “remarkable” recipients and their achievements.

“We are so honoured that they have accepted the highest honour that the University of Limerick – or any university – can bestow on any citizen, and that is an honorary doctorate.

“You join many ambassadors of this wonderful University in its 50th year – you will remain connected with us, and we are so grateful and honoured that you should do so.”

The ‘Godfather of Coaching’ Liam Moggan, as he is widely regarded in Irish sporting circles, has made an indelible contribution to sport nationally and has a long association with UL – fitting in the University’s 50th anniversary year that he was among the earliest groups of students at the former National College of Physical Education here in Plassey.

An accomplished athlete who won county senior titles in Galway as a schoolboy and subsequently in Limerick as a student, in Dublin where he taught physical education, geography, maths and history at Ardscoil Rís, and in Meath, where he now lives.

He said receiving the honorary doctorate was “huge – it is the connection to all the people that helped get me here. But I have a very strong link to the early days of the campus here, I was student from 1974 to 78 – met my wife, and my children are all here today.

“I loved that at that stage, this (place) was a springboard for new thinking, for transforming the way sport and PE was done. I have gone on to see it in many other ways – music, medicine, engineering and so forth.

“I came back to work on campus, so to be honoured in this way, here, it is huge – hard to put exact words on it,” he added.

Professor Margaret Murnane, the world-renowned physicist and true leader in her field, is based in the US where she is among the most research active physicists, but hails originally from Castleconnell, Co Limerick.

Her work in ultrafast laser and x-ray technology is pushing the limits of how lasers can operate at the fundamental limits of speed and stability. The prestige of Margaret’s research and the lab she runs with her husband Henry Kapteyn is a beacon for the contribution cutting-edge science can make to solving the scientific and technological challenges we face in today’s world.

Professor Murnane is the recipient of both the St Patrick’s Day Science Medal and a Presidential Distinguished Service Award.

Professor Brigid Laffan was one of the very first students to attend UL – then the National Institute of Higher Education – where she met her late husband Michael.

Now a world-leading academic and political scientist in her own right, it is fitting also as a European Studies graduate, former Director of the Robert Schuman Centre for Advanced Studies in Florence and a well-known commentator on European affairs, that Professor Laffan, who is from Cahersiveen in Co Kerry, receives this honour in 2022, which marks 50 years since Ireland joined the European Union.

She said: “This means everything because my entire life was determined by my decision to do European Studies at NIHE. I met my future husband here and also began my entire career – so to be honest it is the closing of a circle.”

Sr Stanislaus Kennedy – or Sr Stan, as she is more affectionately known – is a shining example of charity, of goodness and an inspiration to many, her work as the founder of the country’s biggest voluntary organisation fighting homelessness, Focus Ireland, and her involvement in the National Immigration Council, making her a household name.

Born Treasa Kennedy, she grew up as one of five children in the village of Lispole, just outside Dingle in County Kerry, later joining the Religious Sisters of Charity in Dublin, an order established by Mary Aikenhead in 1815.