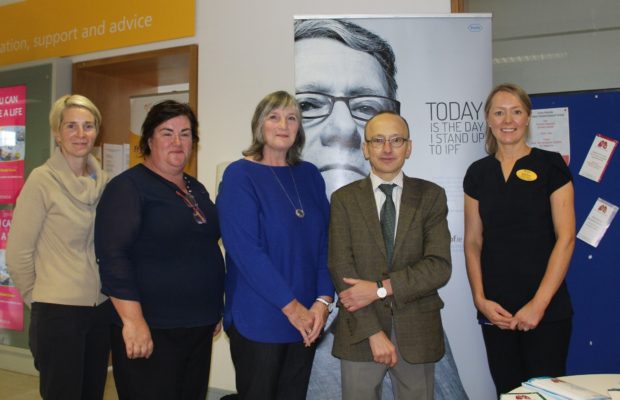 Idiopathic Pulmonary Fibrosis (IPF) is a rare and progressive condition which involves the development of scar tissue (fibrosis) in the lungs. In many cases, the origin of the condition – which causes extreme breathlessness, fatigue, cough, and ultimately respiratory failure – is unknown.

Diagnosis can be difficult given the similarity of symptoms to other respiratory conditions but early diagnosis and referral to a specialist centre is crucial so that patients can be started on anti-fibrotic treatment. There are over 1,000 people living with IPF in Ireland today and approximately 360 people are newly diagnosed with the condition each year.

Two new medications which help to slow down the progression of the disease (Pirfenidone licensed in 2013 and Nintedanib licensed in June 2017) are funded by the HSE.  Some IPF patients may also be suitable for a lung transplant.

The theme to raise awareness for IPF World Week is “Blowing soap bubbles” and the Slogan “Breath of Hope”.

Blowing soap bubbles is a joyful activity. When you are healthy, it takes less than a second to blow bubbles. If you are a patient with IPF, this simple activity can be very challenging. The Breath of Hope Campaign aims to raise awareness of IPF while reminding about the importance of lung fitness/health.

Noreen O’Carroll, a mother-of-two from Birdhill, County Tipperary, was in her mid-50s when she was diagnosed with IPF.

“It is devastating news to get. The prognosis for those diagnosed with IPF is two to five years but thankfully these two new drugs, which were not available until recently, are showing really good results. The other thing is how you deal with your diagnosis. You have to keep positive and keep educating yourself about the disease. That is what keeps you going,” said Noreen.

It was in this spirit that Noreen set up the ILFA MidWest Support Group, which she describes as a “fantastic source of support”. 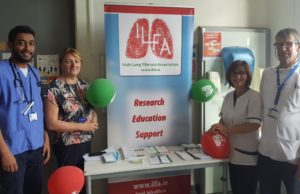 “There are 10 of us currently and we meet every month. It’s a great source of support to be able to chat about things that work and things that don’t. We have one gentleman who has had a lung transplant and that gives you hope.”

“I attend the transplant clinic at the Mater hospital, Dublin every six months, so I am on their radar but not advanced enough yet to be considered for a lung transplant. In the meantime, I am being managed by the respiratory team here in Limerick.”

Noreen’s advice to people who notice a change in their respiratory health is plain.

“If you develop a cough or notice any other change, visit your GP immediately. That is what happened to me. The earlier you get seen, the earlier it is diagnosed and you start the medication if suitable, then the better it will be for you. Once you are diagnosed it’s important to educate yourself about this disease and get as much support as possible be it from your family, the respiratory team, ILFA or the support group.”

Dr Aidan O’Brien, Consultant in Respiratory Medicine, UL Hospitals Group, said IPF affects approximately one in 1,000 people aged over 70 and that the disease was more prevalent among men than women.

“It is a disease that is more common than we think and becomes more common as people get older. It usually presents as persistent breathlessness or an ongoing cough and if people have a concern in that regard, they should be seen by their healthcare professional in the first instance, who will then organise further investigations if they deem it appropriate” said Dr O’Brien.

“Where previously there were no real therapies for this disease, now there are well-tested and proven effective therapies. But it does require further evaluation at specialised centres and thankfully in this region, UHL has a specialised centre for interstitial lung disease. And thanks to people like Noreen, we also have a recently set up a support group for this not too uncommon disease in older patients,” he added.