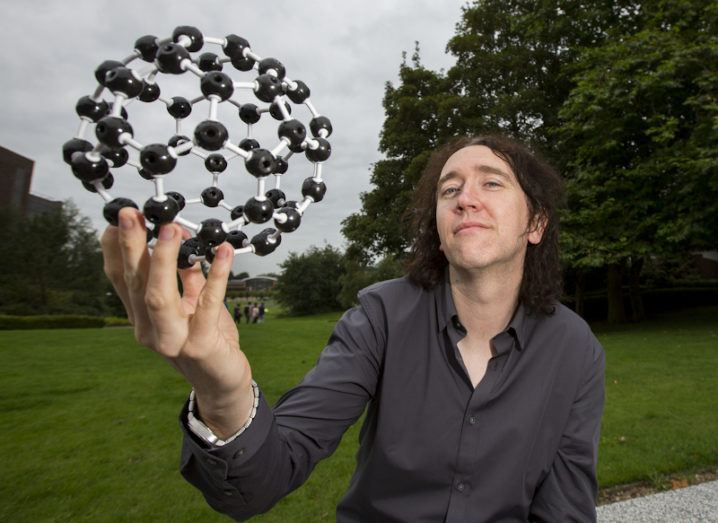 UL Research Team – Professor Damien Thompson and his team made the discovery using state of the art computer simulations performed on the Irish Centre for High-End Computing supercomputer.

The UL research team at Bernal Institute have discovered that a simple molecule made from 77 atoms can provide a new fundamental electronic circuit element in which complex logic is encoded in nanoscale material properties.

The metal-organic compounds were synthesised by collaborators in Kolkata, made into films in Singapore and tested as circuit elements in Colorado and Texas.

The new type of brain-inspired computing architecture was made by enhancing the electrical properties of soft crystals grown from the molecules.

The finding has been reported in the world-leading journal ‘Nature.’

Damien Thompson, Professor in Physics at UL, who leads a research team in predictive materials design at the Bernal Institute, made the discovery using state of the art computer simulations performed on the Irish Centre for High-End Computing supercomputer.

He showed that the molecules use natural asymmetry in its metal-organic bonds to cleanly switch between different states, allowing it to perform ultra-fast decision-making.

“In the new device, everything is done in one place, so there is no need to keep reading or moving information around,” explained the Science Foundation Ireland-supported scientist.

The device removes the ‘von Neumann bottleneck,’ which is a problem that has occurred in computers from the very beginning and interferes with technology development.

This new molecular circuitry means that the computer-processing unit no longer has to get data for each operation it performs, which saves hugely on time and energy costs.

“We are excited about the possibilities because the devices show all the hallmarks of brain computing,” Professor Thompson said.

He said, “First, a huge number of tiny, identical molecular processors are networked together and work in parallel. They show both redundancy and reconfigurability, which means the device can solve problems even if the individual components do not all work perfectly all the time or in the exact same way every time.”

The new circuit elements could provide computers that are smaller, faster, and more energy efficient, which is what is needed for edge computing, internet of things and artificial intelligence applications.

“This high impact research reinforces the ambition of the Bernal Institute at UL to impact the world on the basis of top science in an increasingly international context. This is a continuation of Bernal scientists’ world-leading contribution to the field of predictive materials modelling,” he said.

Dean of Science and Engineering at UL, Professor Seán Arkins, said, “The researchers in UL’s Department of Physics continue to pioneer the exploitation of organic materials for electrical applications, and this work places them at the forefront of molecular nanotechnology.”

For more information on the Bernal Institute go HERE

For more stories on the University of Limerick go HERE