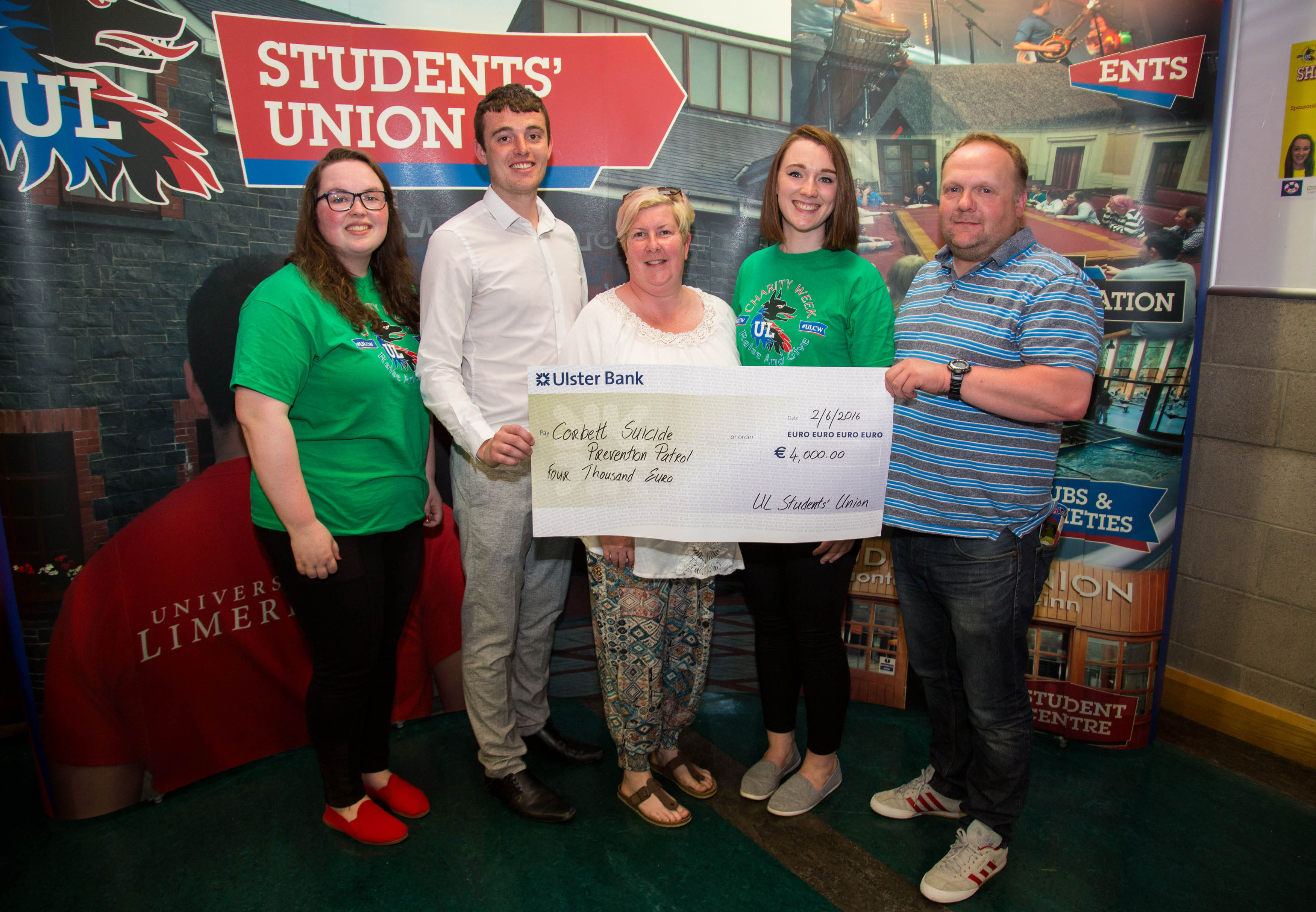 The Charities chosen this year by the students in UL were Corbett Suicide Prevention Patrol, whose selfless volunteers spend five nights a week patrolling the rivers in the hope of getting to people on time before ending their lives. BUMBLEance which was created by the Saoirse Foundation, to provide a national transportation facility for critically ill children in Ireland. The SVP Drop in Centre which provides hot meals, showers, clean clothes, advice and advocacy services to many homeless and marginalised people in Limerick city and finally Blood Bikes Mid-West & Blood Bikes West  who have volunteers dedicated to helping those who are in receipt of care provided by the HSE and private hospitals throughout Ireland.

A number of events were held during Charity Week which took place this year during the first week of March. The highlights of the week included Professor Green playing to a full crowd in the  student courtyard; Kristian Nairn, the actor who plays Hodor in Game of Thrones, playing  a sell-out DJ set in the Stables  Club;  Shave or Dye, The infamous Nearly Naked Mile; and the Iron Stomach competition to name a few. ULSU President Colin Clarke thanked the local community and students who donated “It’s important that we acknowledge the tremendous effort of all of our student volunteers who put countless hours of bucket collecting in during the week. Students often unfairly get a bad name and people can forget the great amount of effort, time and financial contributions they give to local and national charities. I’d also like to take the opportunity on behalf of ULSU to thank the local community for their support and bucket donations during the week”. Colin Clarke also thanked the outgoing Welfare Officer Ciara Corcoran who organised the week and all the staff of ULSU who helped make charity week the success it was. 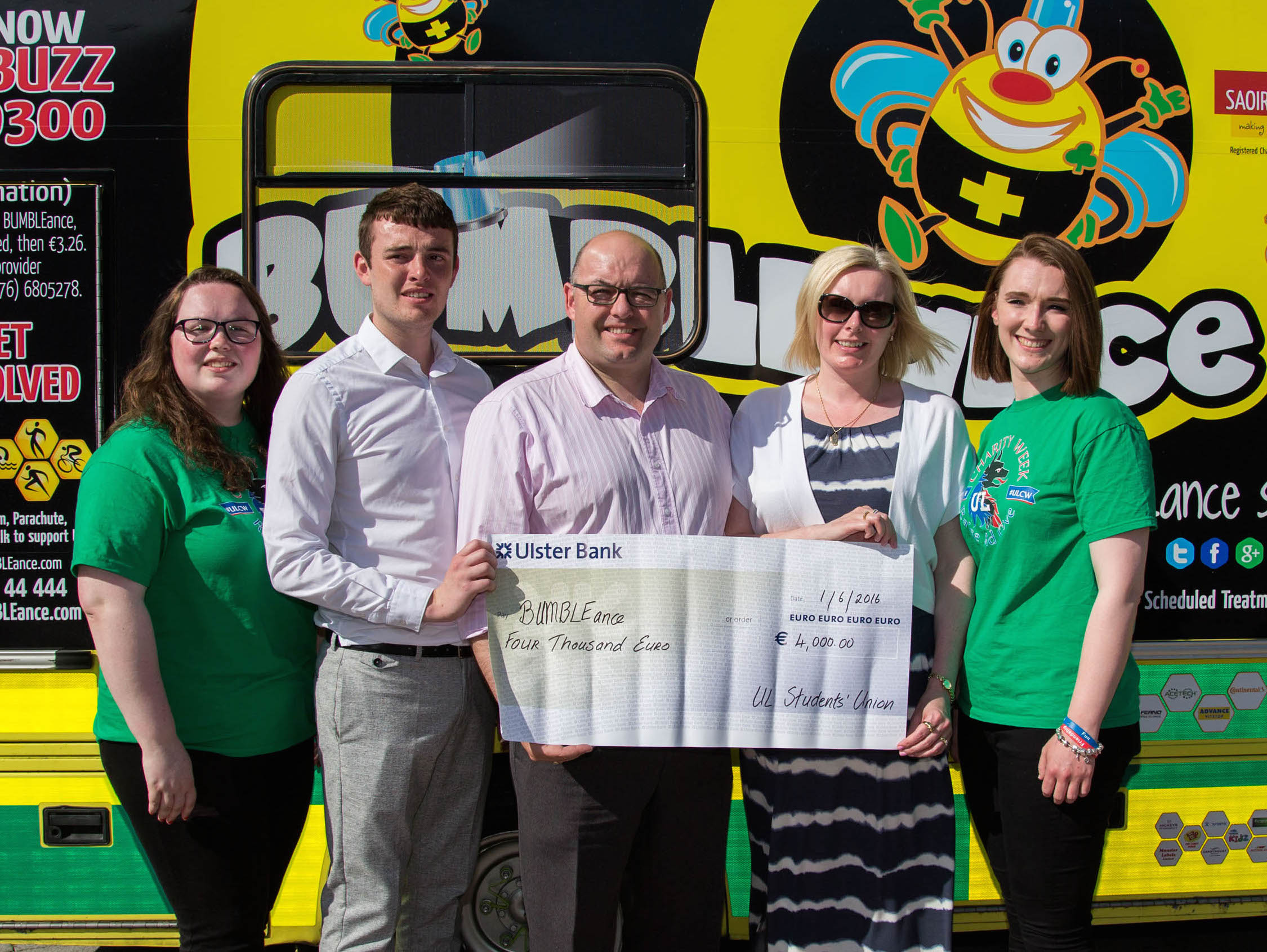 The Celebration Event also saw the official launch of UL Students’ Union Strategic Plan – ‘Taking Giant Steps’. The Plan, to run from 2016-2020, has 31 Goals across four key areas of work, namely Student Engagement, Student Facilities and Services, Student Government and Union Management. The implementation of the Plan over the next four years will bring huge benefits to current and future students of UL including a new purpose built state-of-the-art student centre, new and enhanced sports facilities, more clubs and societies, more information and awareness campaigns to support students particularly in the areas of mental health and wellbeing. Martin Ryan, General Manager UL Student Union, in outlining the Plan said “UL Students Union will mark 45 years in existence in 2017 and this plan will help us make a difference in the lives of thousands of current and future UL students by helping them through challenges, by creating opportunities for personal development and fun, by delivering a range of integrated services and supports and by making sure their voice is heard on issues they face.”

Dr. Bernadette Walsh, Director Student Affairs at UL, who launched the Strategic Plan said ‘On behalf of the University of Limerick I congratulate ULSU on their ambitious Strategic Plan and on the process engaged in getting their first Strategic Plan to this day. There are many opportunities identified in ULSU’s  Strategic Plan which will enable the SU  to work and collaborate with a diversity of stakeholder areas across the University and Student Affairs greatly looks forward particularly to engaging  productively with ULSU in  areas to  assist transitioning students from secondary to 3rd level education,  to support improved student engagement, both within and outside the classroom, to develop and promote community engagement opportunities for UL students and to ensure all UL students are supported  throughout their academic journey’.

Finally the opportunity was taken to thank the outgoing Sabbatical team for their fantastic work during the academic year and recognise their many achievements. Mr. Colin Clarke, ULSU President, Ms. Ciara Corcoran, Deputy President / Welfare Officer & Ms. Marian O’ Donnell, Vice President / Academic Officer had an excellent year in office which included passing a referendum for a new student centre and sports facilities worth €28 million, successfully lobbying the university to hire a new full-time Deputy Head of Counselling, rejuvenating the campus newspaper An Focal, increasing its frequency of publication to every two weeks and distributing it to the local community, and launching the new Student Choice Awards.