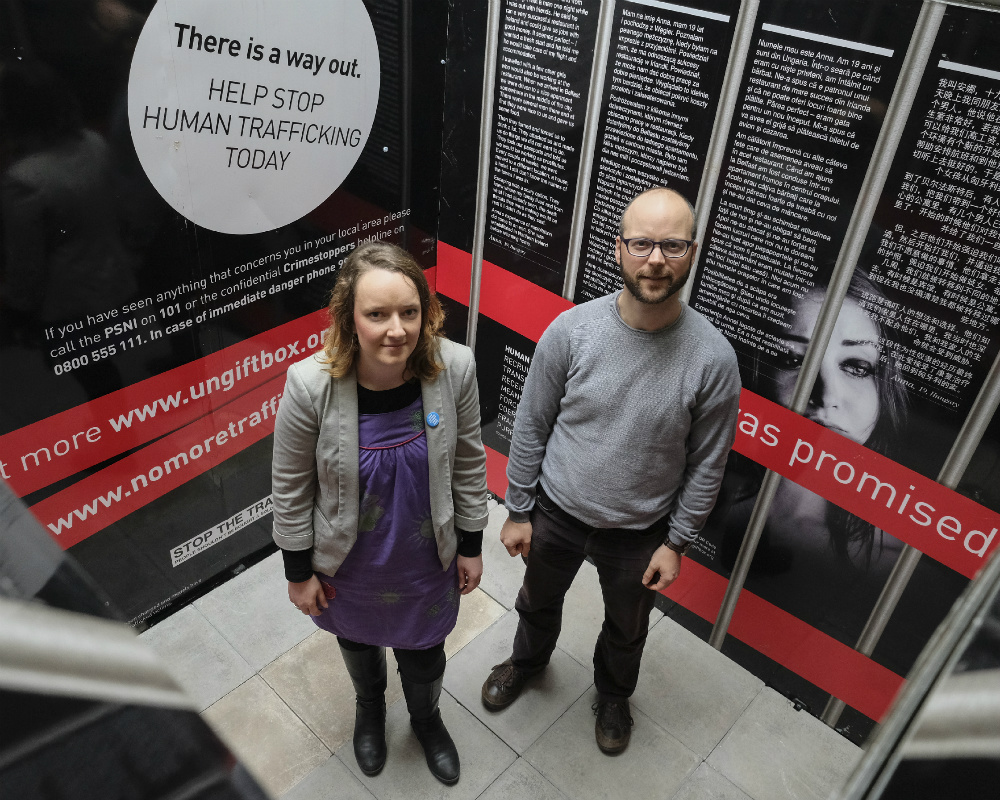 On Friday, March 10, a gift box with a difference was on display in Mary Immaculate College in an effort to raise awareness on the issue of human trafficking.

The UN GIFT Box, a unique piece of public art, is currently touring Ireland throughout the month of March to raise awareness of human trafficking and modern day slavery. It is a walk-in installation where members of the public can learn more about the deception involved in human trafficking and the suffering of the victims drawn in by traffickers. The outside of the UN Gift Box looks like a wrapped gift, covered with promises. Inside, visitors learn about the realities behind the false promises used by criminals to lure people into their net. Passers-by will be invited to spend a few minutes inside the box, reading the true stories which unwrap the truth about human trafficking.

Speaking on the day Brighid Golden, Development Education and Global Citizenship Project Worker at Mary Immaculate College and organiser of the MIC event, said “Human trafficking is often described as ‘a crime hidden in plain sight’ as victims of trafficking are involved in forced labour in many different areas of society, and can be seen on our streets where they are forced to beg. Human Trafficking is the fastest growing international crime and can be found in all countries in the world and in different parts of countries, this modern form of slavery is taking place in Ireland and is happening in Limerick. I am glad that we could bring the GIFT Box to MIC to help raise awareness of this issue among our college community”.

Commending the UN Gift Box initiative Tánaiste and Minister for Justice and Equality, Francis Fitzgerald, TD, said “Human trafficking is a horrendous crime, one which sees the most vulnerable people deceived, coerced, exploited and harmed. It often begins with promises of a better life. I think this box captures that idea in a very thought-provoking way.

“Public awareness is a key part of our strategy for combating human trafficking, as outlined in the Second National Action Plan which I launched last October.  Those of us who carry the legislative and law enforcement responsibilities to counter this terrible crime need a well-informed public in order to succeed. Groups like APT, Act to Prevent Trafficking, are key to raising public awareness and educating Irish people about the horrors of this crime and what can be done to prevent it”.

UN GIFT, or Global Initiative to Fight Trafficking, is an initiative of the United Nations and anti-human trafficking NGOs. Act to Prevent Trafficking (APT) is the Irish NGO which is coordinating the delivery of the GIFT Box to more than a dozen locations around Ireland. The initiative is supported by the Department of Justice and Equality through the Anti-Human Trafficking Unit and by An Garda Síochána through the Human Trafficking Investigation and Coordination Unit.

or you can visit UN Gift here