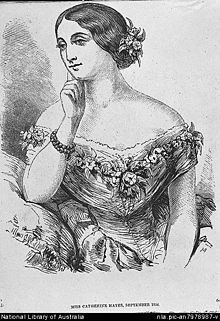 A portrait of Catherine Hayes from September 1854 by George W. Mason

Over the years, Limerick has been gifted with many talented souls from various walks of life. However, not many have reached the substantial influence and legacy that surrounded world-famous soprano singer Catherine Hayes.

Hayes was born to Anglo-Irish parents at 4-Patrick Street, Limerick in 1818. Musical talent was seemingly hereditary – her father was musician Arthur Williamson Hayes. However, her father abandoned the family while Catherine was still very young. She and her sister were raised by their mother alone.

In 1838 at just eighteen years old, Catherine’s powerful vocals began to attract attention. One such listener happened to be Edmund Knox, Limerick’s Church of Ireland bishop. Following this, Catherine Hayes quickly became very in-demand to sing at private events held by members of the Protestant Ascendancy. Knox’s efforts also secured Catherine funds to study in Dublin under Antonio Sapio. It was also in Dublin in 1839 where Catherine Hayes had her first public performance in the Rotunda Hospital, now known as the Gate Theatre.

The following year she held a public performance in Limerick, as well as several more performances in Dublin, dramatically increasing in popularity. She then transferred her studies to Paris for a year and a half where she studied under Manuel Garcia, who then advised her to emigrate to Italy. While in Italy she studied under Felice Ronconi. During her time in Italy, she also attracted the attention of famed Italian contralto Giuseppina Grassini, who secured her a performance in the Italian Opera House, Marseilles. Her first performance here was as Elvira in I Puritani and her performance was met with audience approval and roaring applause. Following the performance, she returned to Milan to continue with her studies. However, she was quickly offered a performance at Milan’s La Scala opera house. Following her performance at La Scala, Italian opera composer Giuseppe Verdi approached her to collaborate with him on his newest opera.

Catherine Hayes was now a well-established soprano performer, with a voice frequently described as sweetly-sung. Catherine had a highly impressive vocal range, being able to reach the note D in alt and singing with an excellent trill. She was also described as an emotional, moving actress and very graceful on stage.

Catherine remained in Italy until 1849, engaging in several more operas and performances over the years. She then traveled to England and lived in London, making her English singing debut at Covent Garden in Linda di Chamounix in April of 1849. Catherine became so popular she was even requested to perform before Queen Victoria at Buckingham Palace.

Hayes rose rapidly in fame throughout the world, going on to give performances in the Americas, Asia, and Oceana. After a five year absence of touring the world, Hayes returned to England in August 1856. She married on October 8, 1857, at St. George’s, Hanover Square to a man named William Avery Bushnell. However, William soon fell very sick and died in France at the age of thirty-five in 1858. Even after her husband’s death, she continued to perform in concerts in London and surrounding countryside towns.

On August 11, 1861, Catherine Hayes passed away while staying with friend Henry Lee at his home in Kent. She was laid to rest in Kensal Green Cemetry in London, where her grave remains marked to this day.

For more stories about Limerick’s Most Loved, go here.