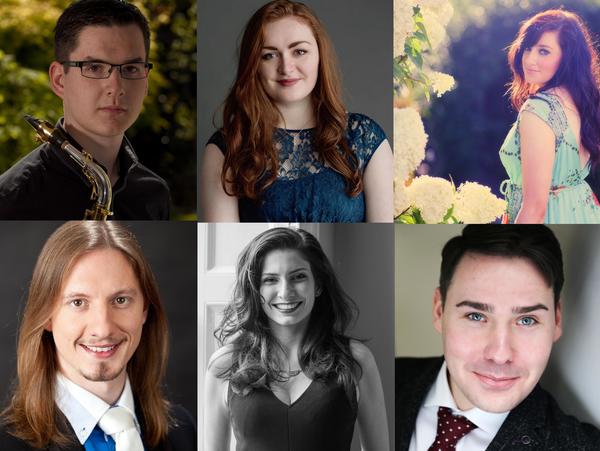 University Concert Hall (UCH) is delighted to announce details of its Rising Stars Concert 2018 which now forms part of the venue’s annual programme of events. UCH has invited a group of exceptional young artists to become its 2018 Rising Stars and they will perform on Thursday 19th April.

Individual programmes on the evening will feature pieces by Strauss, Donizetti, Mahler, Mozart, Bizet, Bernstein and many more.

Once again UCH is delighted to welcome back Dearbhla Collins as accompanist on the evening. Regarded as one of Ireland’s finest and most versatile musicians, Dearbhla is a prize-winning solo pianist with a distinguished performing career both nationally and internationally. Rising Stars will be presented by Lyric Fm’s Lorcan Murray.

Robert Finegan (20) is currently a 3rd-year student at DIT Conservatory of Music studying music performance with Kevin Hanafin.  He began his musical education with the Ardee Concert Band where he has since regularly featured as a soloist. In 2013 Robert was awarded a scholarship from St. Peter’s Male Voice Choir to study at DIT Conservatory of Music where he was the recipient of the School of Excellence Award and went on to win the Macardle Young Classical Musician Award in 2014. In 2017, Robert was awarded 2 nd prize in the Irish Freemasons Young Musician of the Year and was also the inaugural winner of the Flax Trust Music Award. This summer Robert will represent Ireland at the World Saxophone Congress in Zagreb, Croatia playing music by contemporary Irish composers.

Corina Ignat is currently doing her Masters in Music Performance at the Royal Irish Academy of Music, studying with Virginia Kerr. She has performed with Lyric Opera at the National Concert Hall, at the Wexford Opera Festival 2017 and as Queen of the Night in Mozart’s The Magic Flute at the Samuel Beckett Theatre. Prizes include 2nd place in the Irene Sandford competition 2017, 3rd place in Navan Choral Festival – Young Opera Voice competition 2017, the Mignon Rumbold Cup in Newpark Music Festival, 1st prize in the Vocal Solo Classical, Vocal Solo Musical Theatre, Vocal Baroque Aria and Vocal Lieder Competition in the Midlands Feis 2015 and Most Promising Singer in the Irene Sandford competition 2013.

Programme:
Shostakovich Prelude and Fugue No.11 in B major
Brahms Fantasien Op.116 Nos.1-3

Cork pianist Ellen Jansson (21) began her studies at CIT Cork School of Music with Eleanor Malone and is currently studying there full-time with Mary Beattie. She graduated from the prestigious Chetham’s School of Music in Manchester in 2014, where she was the winner of the Chetham’s Yamaha Piano Competition as well as attaining an LRSM performance diploma with distinction. She spent last year studying on an Erasmus scholarship with Professor Martin Hughes at the University of Music and Performing Arts in Vienna. Ellen has appeared as soloist with the New York Concerti Sinfonietta, the National Symphony Orchestra of Ukraine and the National Youth Orchestra of Ireland, and is a multiple prize winner at Electric Ireland Feis Ceoil in both chamber and solo competitions.

Robert is currently studying at The Royal Irish Academy of Music under the aegis of Dr Veronica Dunne and répétiteurs Dr Dearbhla Collins and Alison Young. He is a multiple prize winner in the Electric Ireland Feis Ceoil and in 2017, from a field of 37 singers, he emerged the winner of the prestigious Irené Sandford bursary in RIAM. Robert was selected as the 2017 ‘plec pick’ classical artist to watch by Goldenplec.ie. In 2017, he was presented with the Count John McCormack medal in the Dublin Mansion house by the John McCormack society.  He also finds ample time to practice the fine art of choral singing and is a member of the Lassus Scholars under the direction of Dr Ite O’Donovan.

Bernstein Glitter and be gay-Candide

Cork soprano Emma graduated with distinction from the M.A in Opera Performance course at the Royal Welsh College of Music and Drama where she was winner of the Lee Freeman

Scholarship Prize, the Dolan Evans Award and a Leverhulme Scholarship. Emma is this years

She made her Wexford Festival Opera debut in 2015 as Gretel in Hansel and Gretel, returning for their 2017 season where she sang the role of Polly in the world premiere of the The Dubliners (nominated for Best Opera ITTA 2018). Recently Emma featured in The Merry Widow and La Traviata as part of The Cork Opera House Concert Performance Series and this season she will return to sing the role of Yum-Yum in the Mikado conducted by John O Brien.

Adams For you there is no song (Five Millay Songs)

Kevin Neville is a bass-baritone from Limerick city who began his training with Olive Cowpar. He completed his BA (Hons) in Music and English Literature at Trinity College Dublin in 2013 and his MMus with First Class Honours under the tutelage of Emmanuel Lawler at D.I.T. Conservatory of Music and Drama in 2015. Kevin has won numerous competitions for opera, lieder, oratorio, sacred

Kevin is a grateful recipient of the Capuchin Bursary, the Arts Council of Ireland and The

Lyon’s Club Award. He will début with Irish National Opera as Peter Schlémil in The Tales of