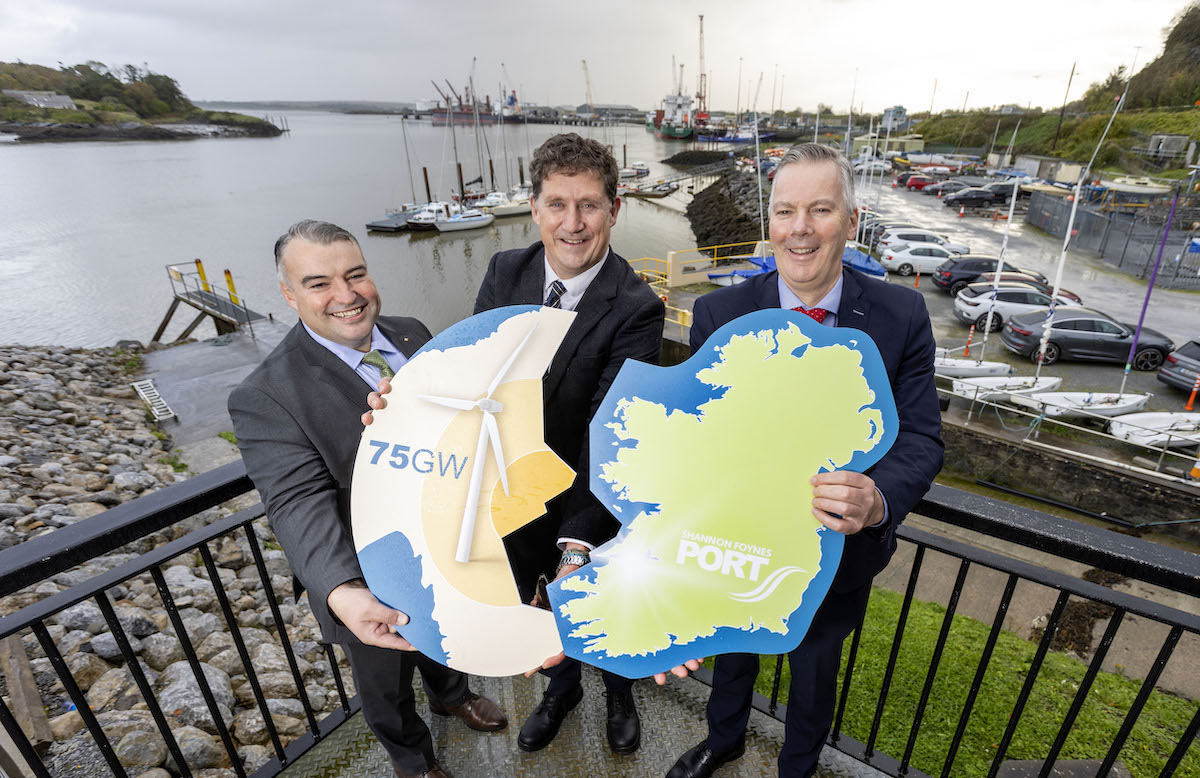 Vision 2041 masterplan – Pictured at the launch were Paul Deane of Bechtel, authors of the new masterplan; Minister for the Environment, Climate and Communications Eamon Ryan, TD, who launched the report; and Shannon Foynes Port CEO Pat Keating. Picture: Arthur Ellis.

Shannon Estuary has capacity to become major European logistics and trade centre, as well as a contributor to Irish economy – international experts state

According to a new report, the Shannon Estuary presents a unique opportunity and is best placed in Ireland and Europe to develop the Atlantic floating offshore wind industry and help the country reach its climate goals.

The review of the Shannon Foynes Port Company’s Vision 2041 masterplan by global experts Bechtel supports the development of offshore wind and explains how the deep waters of the Shannon Estuary, almost unrivalled in a European context, would not only facilitate the deployment of floating offshore wind at scale from Europe’s best wind regime on Ireland’s west coast but help decongest the Irish supply chain through the provision of road and rail linked container services.

The report, which was launched by Minister for the Environment, Climate and Communications Eamon Ryan, TD, found that the development of the Shannon Foynes Port would play a vital role in helping Ireland meet its net zero obligations by 2050. It would also contribute significantly to Europe’s efforts, through its REPowerEU plan, to unwind its dependence on Russian fossil fuel imports and accelerate the expansion of renewables.

The potential electricity generation from the enormous renewable energy resource of the west coast winds can, the report estimates, deliver 30 gigawatts of floating offshore wind by 2050 – six times more than existing domestic demand. Significantly, this energy would also kick start a new industrial ecosystem based on the production of carbon-free green electricity, hydrogen and derivatives, which will be transformational for Ireland by way of use for domestic electricity and e-fuels, electricity exports, and e-fuels exports.

At peak, up to 120 floating turbines would be installed offshore per year. The economic impacts would also be far-reaching with thousands of jobs created and billions of euros invested in supply chain and route-to-market infrastructure and facilities around the region.

The Vision 2041 masterplan report identifies the numerous advantages of the Shannon Estuary, including its 500km2 of deep water, its 1,400 ha of zoned Strategic Development Locations and, particularly, its proximity to the Atlantic’s abundant offshore wind resources.

It recommends the establishment of four core facilities on the Shannon Estuary to support the delivery of floating offshore wind at scale. These are turbine integration and pre-commissioning at Foynes Deepwater Port, substructure assembly at Moneypoint, wet storage at various locations within the Estuary and operations & Maintenance base at the Port of Foynes.

It found that expansions at Foynes Port would add substantial freight capacity to the national supply chain and that this capacity would be situated at an uncongested point in the national transport network that is connected by both road and rail, significantly relieving pressure on the congested Greater Dublin Area network.

Speaking at the launch, Minister Ryan said: “Developing offshore renewable energy (ORE) is integral to Ireland’s energy independence and achieving Ireland’s Climate Change ambitions with a target of 5GW of offshore wind by 2030, a further 2 GW for hydrogen production by 2030 and the potential of at least 30GW of floating offshore wind power as set out in the Programme for Government and the Climate Action Plan 2021.

“I congratulate Shannon Foynes Port Company and Bechtel on the report. The report sets out the opportunity in the Shannon Estuary as a hub for facilitating the development of offshore wind, along with the production of clean fuels– including green hydrogen, ammonia and methanol.  The Strategic Review demonstrates the company’s commitment to sustainability, climate action and renewable energy. The Vision 2041 Review also clearly demonstrates the continued commitment of Shannon Foynes Port Company as a driver of economic growth in the Estuary, the Region and nationally.”

Pat Keating, CEO of Shannon Foynes Port said: “This report comes at a critical moment, and we are delighted to have Bechtel supporting us. This is a roadmap for what is required to deliver the unique floating offshore wind opportunity that exists for this region, Ireland and, indeed, Europe because of the unique confluence of assets here on the Estuary and west coast.  The mix of our world-class wind resources and the natural infrastructure, not least our deep sheltered waters, for a global manufacturing and industry base adds up to what is an unprecedented opportunity that we must capitalise on urgently to address climate change.  To fully unlock these significant opportunities there are national policies in several sectors that require updating. Examples include more clarity and urgency around energy policy, enduring regime, alternative fuels and wider economic and social policies.”

Mr Keating added: “Through its REPowerEU Plan, which is about reducing dependence on Russian fossil fuels and fast-tracking the green transition, the EU is looking to its member states for solutions.  Thankfully, Ireland has such a solution here on the Shannon Estuary and West coast, potentially one of the most significant responses from any member state.”

Said Shannon Foynes Port Chairman David McGarry: “There is already very strong interest in our wind energy generation capacity from global players and we would anticipate already making significant inroads by the turn of the decade. This would very much be a phased programme rivalling anything on an international scale but will transition Ireland to a global renewable energy leader. It will deliver our own energy requirements through renewable resources, assisting in the transition to net-zero in the long term, but will also see Ireland become a significant exporter of energy into the bargain.”

Michelle De Franca, Bechtel’s managing director for the UK and Ireland agrees. “This future-proofing plan comes at a time when energy security is more important than ever. There is an increasingly strong case for investing in port infrastructure to support the growth in offshore wind, and the importance of creating local supply chains cannot be underestimated.

“Ports act as focal points during the manufacturing, installation, and operation of offshore wind farms, and Shannon Foynes is strategically ideal to support Ireland’s offshore wind industry, as well as expand to play an even greater role in European shipping. Our work also illustrates that the development of a green hydrogen-based ecosystem in the Shannon Estuary is possible. The production of green hydrogen here will be a much-needed boost to European energy security and will be transformational for Ireland.”

Find out more about the Vision 2041 masterplan