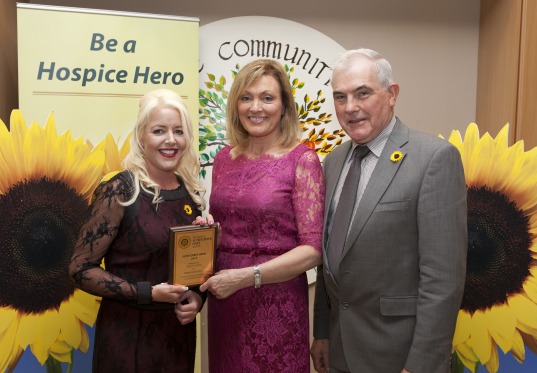 Anne Coughlan is presented with A Hospice Sunflower Hero Award in Dublin by RTE’s Mary Kennedy.

Anne Coughlan, who is an established volunteer at Milford Care Centre, was recently named a Hospice Sunflower Hero at an event in Dublin to mark the launch of National Sunflower Days in June.

The award was presented to Anne and 17 other Hospice volunteers nationwide. In place for five years, the Hospice Sunflower Heroes initiative honours the work of volunteers throughout the country, who work tirelessly on behalf of their local hospice service.

Anne, who began volunteering at Milford Care Centre in 2006, was recognised not only for her stellar fundraising efforts but also the care and consideration she gives to patients. Anne looks after the drinks service with her volunteer partner Finola O’Brien each Wednesday. Also an avid fundraiser, she helps with selling sunflowers and recruiting volunteers for Sunflower Days.

Her nomination stated: “Anne is vivacious and full of personality with a good sense of humour. She brings so much joy to the service users and is also sensitive, empathetic and respectful to the patients and to the staff.”

The Hospice Sunflower Heroes were announced at the launch of the 2014 Sunflower Days campaign which will take place on Friday, 6 June and Saturday, 7 June.  During the two day campaign, people will be able to support their local hospice service by purchasing various pieces of Sunflower merchandise including sunflower pins or sunflower seeds for €2 each from collectors on the streets of cities, towns and villages around the country.

Hospice Sunflower Days is a major source of income for hospices and voluntary hospice groups countrywide.  The Irish Hospice Foundation coordinates the event on behalf of the hospice movement but all of the funds raised locally, stay locally.

Launching Hospice Sunflower Days, RTE’s Mary Kennedy remarked: “Communities throughout Ireland have played a pivotal role in developing hospice services. This year the support is even more important considering the difficult environment charities are operating in. We hope the public will continue to give generously to this very worthy cause and remember a donation can go a long way to bringing comfort and dignity to people at the end-of-life.”