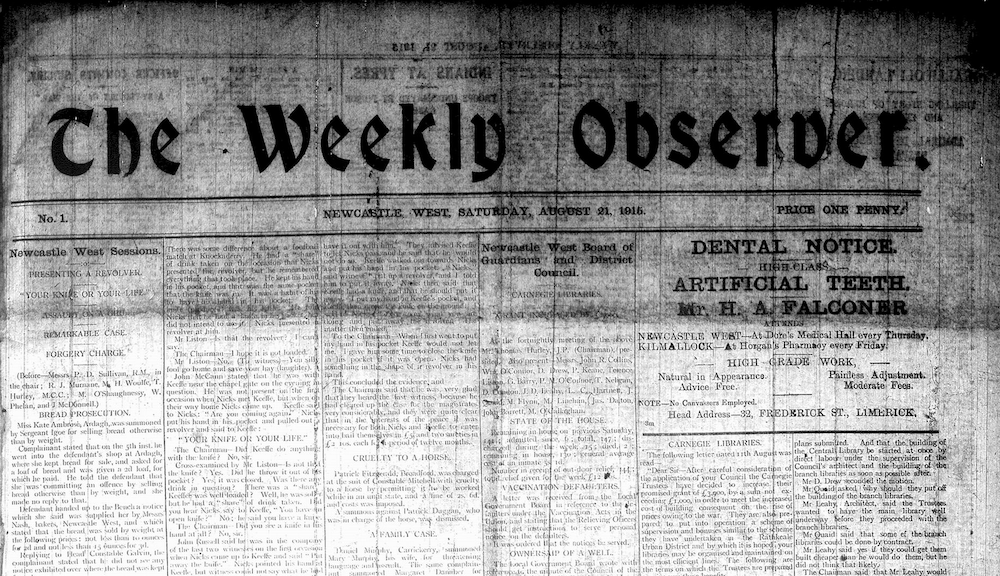 A fascinating insight into the history of Newcastle West in the early 20th century has been unveiled.

The archive consists of five historically significant years of the Newcastle West newspaper, The Weekly Observer, from 1915 to 1919, and is available to the public in both online and hardcopy formats.

It consists of all issues of The Weekly Observer, from its inception in August 1915 through to the end of 1919.

This is a critical period of newspaper coverage of historical events in Ireland, tracking the local impact of the First World War, then the Easter Rising of 1916 and all of the consequences of that event.

Further issues of the newspaper for following years are to be added at a later date.

Mayor of the City and County of Limerick Cllr Michael Collins said, “I am delighted to launch this fabulous new resource for the people of Limerick and for history researchers all around the world.”

“One of the most interesting aspects of the archive is to track the changing editorial policy of the newspaper in the aftermath of the 1916 Rising. Up until then you can see the newspaper had quite a conservative policy in relation to nationalist politics. But, from the moment the rebels were executed there is a complete turnaround in how the newspaper reported on such matters. This is really fascinating to see, as it reflects the understanding we have of how events developed in Ireland after 1916.”

“This archive is just the latest of many historical resources we are making available on the Council website. We have also recently added some County parish journals and books of local history. This is part of an ongoing digitisation project and we are continuing to add more materials all the time.”

Hardcopy volumes have also been printed and will be available for viewing at Newcastle West Library and at the library’s Local Studies Department when the Covid-19 related restrictions are sufficiently relaxed that the public can again access these services in person.

It is available on Limerick.ie HERE

For other stories about Newcastle West go HERE