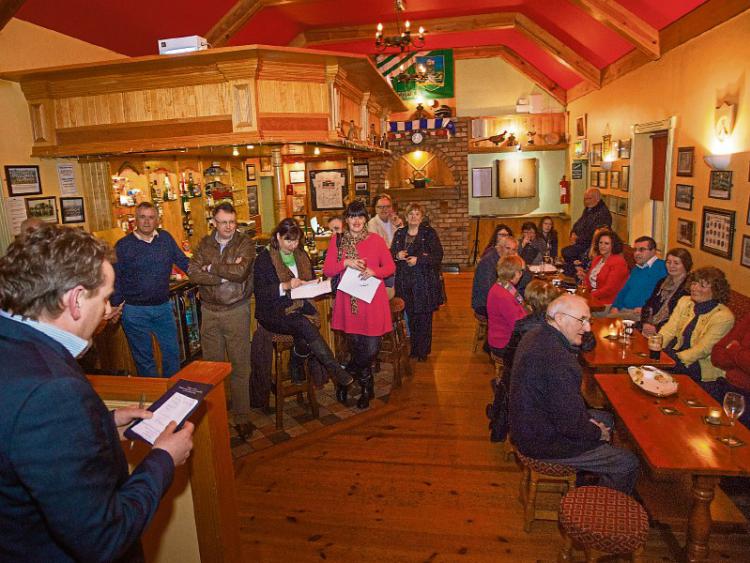 At the festival launch, Johnny Corkery, one of the festival founders, said, “It is hard to believe this is our fourth festival”.  John talked about the inspiration behind the festival, from the setting up of the drama group in 1997 to the actual decision to host a festival in the area.

John went on to speak about the tradition, “Drama is very rich in this part of the country and we thought we could enhance it more. We are just all drama here. It is what we live, what we breathe.”

Thanking the local community council for their ongoing support of the festival and of the drama group, John said “They give us a free hand. And sometimes it’s more a case of we beg for forgiveness rather than ask for permission.”

Knockaderry Clouncagh Drama Group and their production of Martin McDonagh’s A skull in Connemara opened the festival, with six other groups having signed up for this year’s happenings. These groups include: the Listowel Drama Group, the Tarbert Theatre Group and  the Sliabh Luachra Drama Group from Kerry,  the Glanworth Players from Cork and  the Seamus O’Kelly players from Galway.

A newly found group, Tarbert Theatre Group, stands out from the crowd with their contemporary feel.

A teacher of English and Drama at Tarbert Comprehensive, Ms Lavery Carrig said, “This is my second  adult drama.” Her first adult play won a rehearsed reading award in Listowel. Ms Carrig regularly writes and produces drama for and with her pupils.

But last year, encouraged by playwright Deirdre Kinahan, Lavery decided to bring her play Diarmy to the stage and it was then that the Tarbert Theatre Group was born.

The play centres around an issue that was very sensitive in 2013, the right to cut raised bog. “At the time, I felt the issue of the right to cut the raised bog was a very polarised issue, I felt there were families who had real feeling and affinity with their piece of bog who were misunderstood”, Ms Carrig said.

The play was said to have gone down a treat in Listowel so it is hoped to receive the same welcome in West Limerick, on Friday, March 12.

The festival’s second weekend will open with the Tarbert Theatre Group.

This will be followed by John B Keane’s The Year of the Hiker with the Glanworth Players, on March 12.

The festivals’ final night is Sunday, March 13, where we will see the Seamus O’Kelly players on stage with Conversations of a Home Coming by Tom Murphy.

This year’s adjudicator is Terry Bryne who is currently president of the Association of Drama Adjudicators and also a director, actor and playwright.

Check out more about the West Limerick Drama Festival here

Find more great Limerick events like this one here