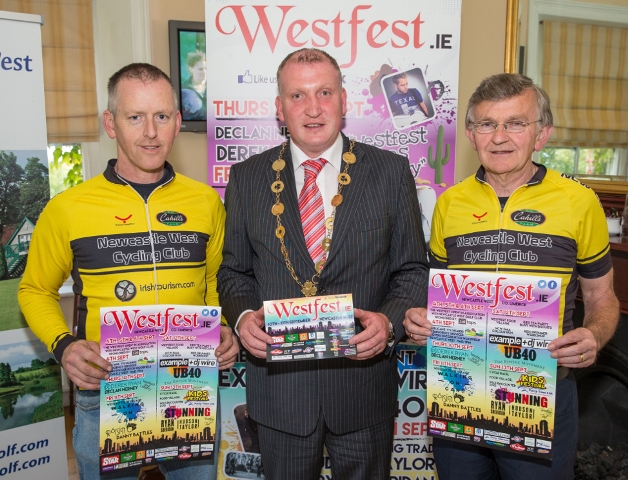 Members of Newcastlewest Cycling Club pictured with Mayor of Limerick City and County Liam Galvin at the launch of Westfest 2015.

Walking on Cars, UB40, Example ,The Riptide Movement, The Stunning and Hudson Taylor are among a big-hitting music line-up for the Westfest 2015 Festival from 10-13 September in Newcastle West, Co. Limerick.

Now in its fifth year, the Westfest Line Up is one of those best kept secrets on the Irish summer festival scene, with exceptional bands performing over four sensational nights of music and entertainment!

Based in the GAA Grounds of the Castle Demense, the headline night on Saturday 12th will see the UK Reggae group UB40 with Robin Campbell take the stage along with Top UK Artist Example and a four piece Dublin Rock Band The Riptide Movement.

Lead singer of UB40 Robin Campbell said ” It’s our first time playing a festival in Limerick and we’ve heard great things about Westfest, we are really looking forward to coming over”

90’s rockers The Stunning top the bill as Sunday night’s main act, while Walking On Cars, another one of Ireland’s most imaginative bands, are to headline on Friday night, with support from Róisín O.

Event co founder and organiser Siobhan Kelly said it was important Westfest retained its reputation for giving value for money and putting the West Limerick town on the festival map, she said: “We’ve come from having one headline artist Mundy in 2011 to The Coronas selling out the main square last year and now on our 5th Birthday we have 12 international acts coming to town, the festival has provided at stage for people to enjoy established artists on their doorstep in a proper festival environment.”

In between all the music , there’s plenty of entertainment on offer for all the family. There’s bouncing castles, drumming workshops, fireworks, a 5k color run and a Carnival to keep the kids happy.

This year’s Festival Food Court will also have an eclectic street food offering, with exotic Asian influences, as well as more traditional food-to-go, including some Italian pizza , Gourmet Sausages and ice cream vendors.

Get your Westfest 2015 tickets HERE.

You can also avail of the on-the-day cover charges, which are just €15 on Thursday Night, €20 for Friday and Sunday and €25 on Saturday night. Weekend Adult tickets are €49 and Weekend Minor €20 which covers Thursday to Sunday, Kids u/12 are just €5 weekend ticket(all plus booking fees) .

Tickets are subject to space, so we’d recommend getting in early, or go book your tickets online, just to be safe.

Please be advised a sign in system will be in operation and under 18’s will not be admitted to the festival venue without a parent or guardian holding a valid ticket.  ID Required