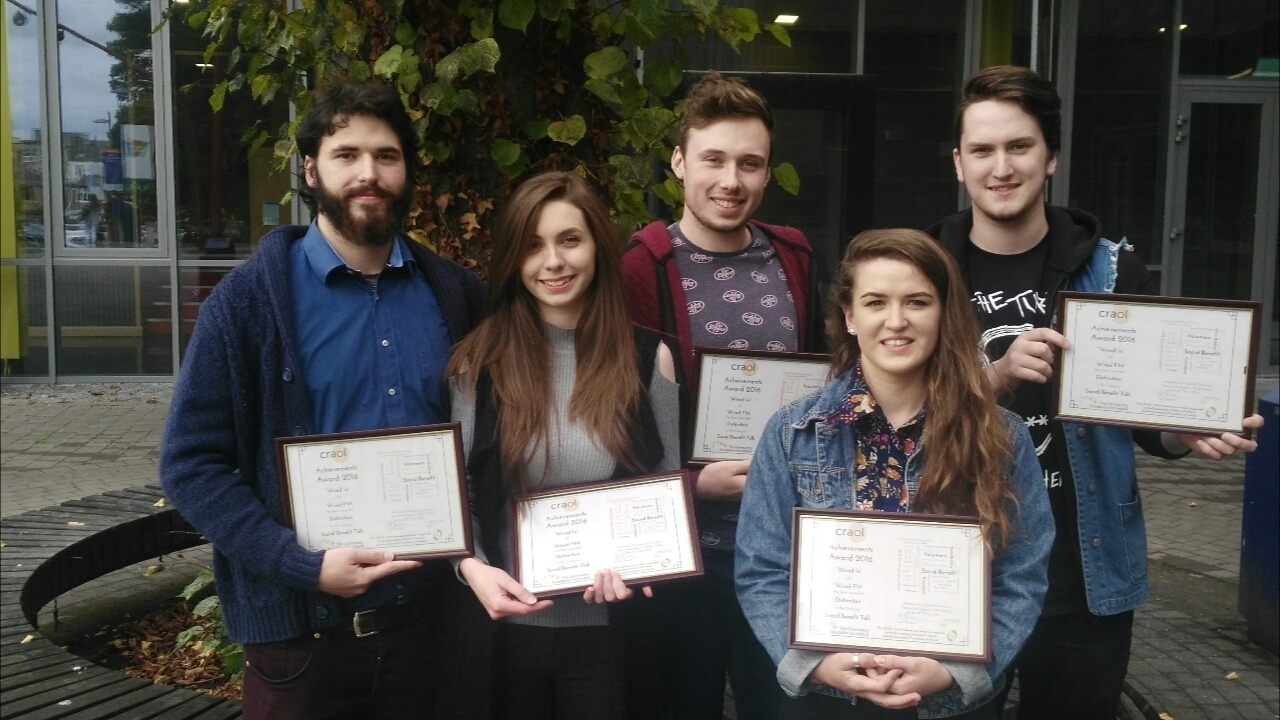 Wired Fm media conference 2016 takes place at the Belltable Theatre on Saturday, November 26 to celebrate 21 years of broadcasting for Limerick students. Pictured above The Wired In team with their Community Radio Awards. Picture courtesy Wired FM.

The Wired Fm media conference 2016 takes place at the Belltable Theatre on Saturday, November 26 to celebrate 21 years of broadcasting for Limerick students.

Throughout the day there will be a series of workshops and panel discussions that will feature alumni of Wired FM who are working in media today, as well as other well-known industry guests. Student stations throughout the country are being invited to attend this unique event, and a large crowd of media students, graduates, and industry people are expected to descend on the city for the day.

Throughout the last 21 years thousands of students from Mary Immaculate College, Limerick Institute of Technology, Limerick School of Art and Design, and The University of Limerick have volunteered and worked at the station, and several will now return to celebrate this milestone in the station’s history.

Wired FM will also link with Limerick City Community Radio on the day for a live broadcast from the foyer of Belltable from 10am-1pm. TheWired Fm media conference 2016 is free and open to the public. Registration is through the Belltable website, or by calling  (061) 953 400.

The Wired FM media conference 2016 After Party will be held at Mollys. Live music from Theme Tune Boy and The Turn, followed by The Totally Wired Club (alternative music you can dance to!)

Registration from 10am (picking up info/name tags etc.)

Throughout the last 21 years thousands of students from Mary Immaculate College, Limerick Institute of Technology, Limerick School of Art and Design and The University of Limerick have volunteered and worked at the station, and the hope is that several will return to celebrate this milestone in the station’s history.

Broadcasting on 99.9FM in Limerick City, Wired FM transmits 48 hours of programming every week during the academic year. Broadcasting a wide range of programmes through the prism of students, including current affairs, magazine shows, arts programmes, documentaries, and of course music.

Programmes that cover every musical genre, from trance to traditional, punk to folk, metal to contemporary Irish, always with an emphasis on local and national talent. This year, to celebrate their birthday, the station plans to extend its broadcast hours.

The exceptional quality of programming produced for the station by students was highlighted at this year’s National Community Radio Awards, when the station picked up two awards, one for specialist music show, ‘Hip Hop Nation’, and another for their daily current affairs programme ‘Wired In’, which won in the specialist speech category.

In the last year, a total of three groups have been trained by Wired FM and certified by QQI. Two Limerick groups of over ‘55’s received QQI level 3 certificates in Media Expression, and a third group, an aspirant station in Scariff in Clare received a QQI Level 4 qualification in Community Radio Skills. Wired FM will be announcing more courses in the coming year.

You can find more information on Wired FM here.
You can read about more events here.