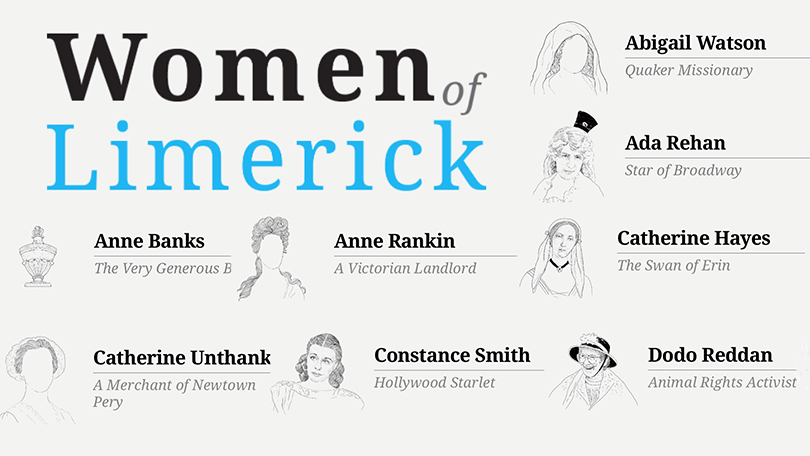 Women of Limerick app aims to remember and celebrate the contribution of Limerick women to arts, education, health and politics.

A new update has been issued for the Women of Limerick walking tour app, bringing the total of fascinating local women featured to thirty.

The app is an evolving research project led by Sharon Slater, Historian in Residence at Ormston House, which aims to remember and celebrate the contribution of Limerick women to arts, education, health and politics, locally, nationally and internationally. It was created by Ormston House, in partnership with Limerick City and County Council.

The walking tour features the stories of women such as Dolores O’Riordan, Constance Smith and even a former queen of Ireland. It stretches from Wolfe Tone Street through the city centre and as far as the Ballysimon Road.

At each location on the map, walkers can read a short biography of one magnificent woman and listen to a story about her life, using the app. Alternatively, all biographies and stories are available to explore on the app from home.

The Women of Limerick App with walking routes is brought to you by @OrmstonHouse in partnership with @LimerickCouncil. Historian and National Heritage Hero, Sharon Slater @limerickslife will introduce 30 Limerick women around the city. https://t.co/OP9fdU8293 pic.twitter.com/7N8LoojTJ2

“We decided to do an app where people could go on a walking tour of Limerick city through women of note. I wanted to use women from different eras. The earliest person mentioned is from the tenth century, and the most recent is Dolores O’Riordan.”

Ms Slater is an award-winning historian who has spent years researching the history of Limerick. She has written numerous books including ‘A Stitch in Time – A History of Limerick’s Clothing Factory’, ‘Limerick in Old Photographs’ and ‘The Little Book of Limerick’. In 2004, Slater launched Limerick’s Life, a website and social media platform where she posts articles telling previously untold stories of Limerick’s people and places.

‘Women Of Limerick’ is available to download free of charge on the Google Play Store (Android) and App Store (Apple).

For more on the Women of Limerick app go HERE

?@DeirdreAPower has documented public artworks by women in Limerick city for the latest update on the Women of Limerick app by @limerickslife ✨?

You can download the app for free on Apple and Android devices here https://t.co/iKVeXpBRjy pic.twitter.com/Nk5ox9c0mb