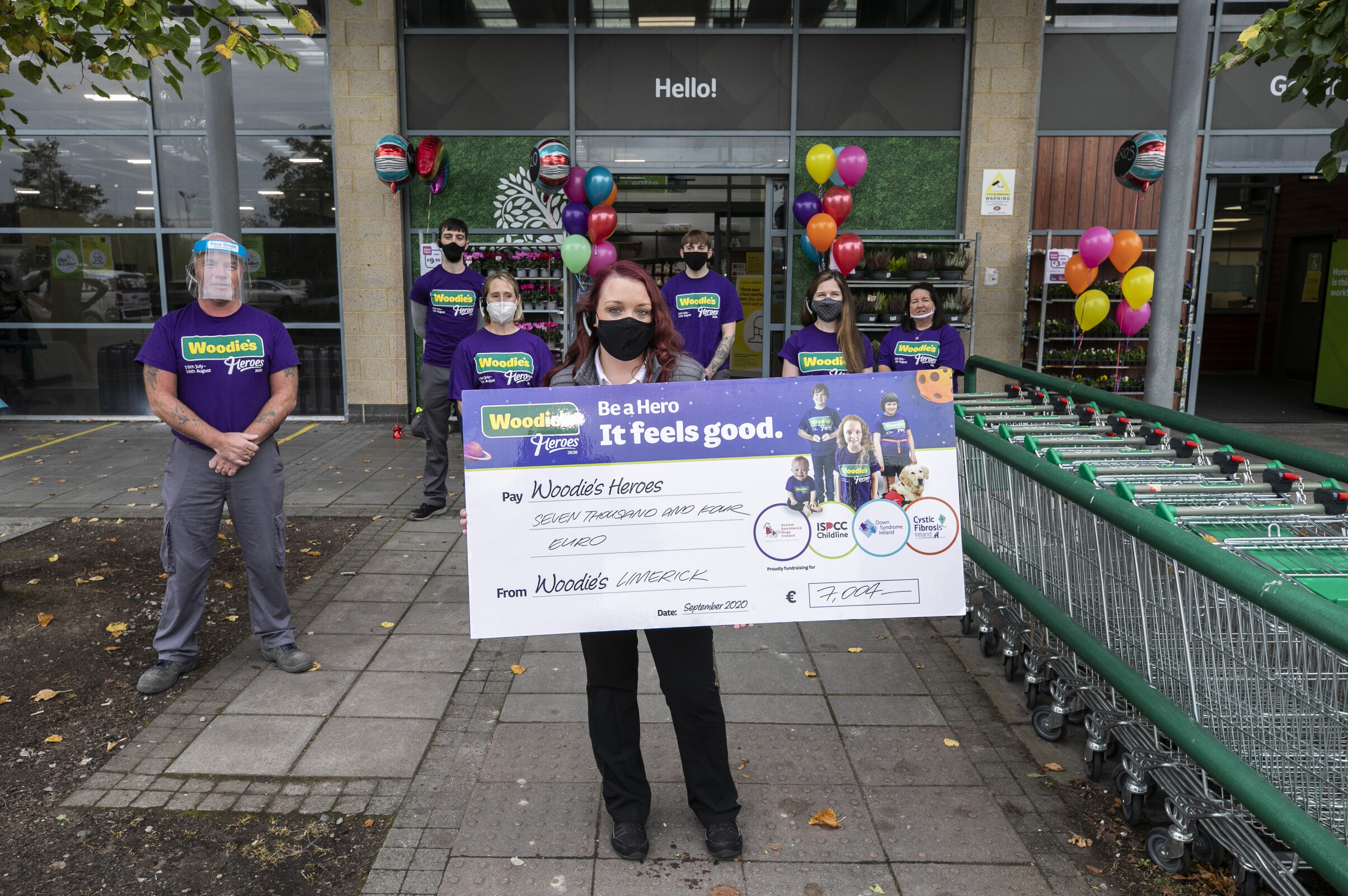 An impressive €7,004.00  was raised by Woodie’s Limerick during the sixth annual Woodie’s Heroes campaign thanks to the generous donations of the customers, colleagues and suppliers of the DIY, Home and Garden store this summer, all in aid of four Irish charities: Down Syndrome Ireland, Cystic Fibrosis Ireland, Autism Assistance Dogs Ireland, and ISPCC Childline. This year, the campaign asked the public to help Woodie’s cover 384,400km by counting their steps – the distance from the Earth to the Moon – and it is safe to say they went to infinity and beyond, raising an impressive €340,000 so far nationwide.

This means a whopping €1.84 million has been raised by Woodies in the last six years. Donations will continue to roll in up to the end of September.

Covid-19 has presented many challenges for everyone especially charities as so many fundraising events were curtailed or cancelled. With the goal of making a real and enduring difference to four children’s charities at this difficult time, Woodie’s colleagues and their customers didn’t let the pandemic disrupt their aim to raise €250,000, generously donating at the till in store and online while upping their step count at home to virtually walk to the moon. With your help Woodie’s have been able to surpass their fundraising targets and make a difference to those most in need.

Woodie’s Limerick are so proud of their achievement and efforts to raise €7004.00 which will help change the lives of so many. Woodie’s would also like to offer a huge heartfelt thank you to everyone who has supported the Woodie’s
Heroes campaign this year and to the plucky little heroes, their parents and the volunteers from the four charities who represented themselves so well on radio stations across Ireland and in the country’s leading newspapers and magazines.

CEO of Woodie’s Declan Ronayne said: “While things are a little different this year for everyone, Woodie’s are so appreciative of the generosity and spirit shown by our colleagues, our loyal customers, and are dedicated suppliers
this year for our sixth annual Woodie’s Heroes campaign. Together we have raised €340,000  for four incredible children’s charities, who routinely do things that are out of this world for those most in need. Thank you to everyone who has helped us “walk to the moon” and raise such vital funds.”

For more info on Down Syndrome Ireland go HERE