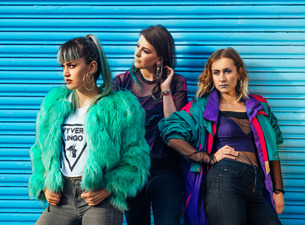 Coming on the back of an exceptionally busy summer for the band, the Dolans Warehouse gig will see the band return to Limerick following their support of Walking on Cars live at King John’s Castle in July.

Wyvern Lingo’s summer schedule 2018 will also see the band perform with Grace Jones at the Trinity Sessions in Dublin, Indiependence Festival in Cork and at both Reading and Leeds Festivals in the UK.

The three were childhood friends who forged lasting musical bonds as they grew older.  Before the release of their debut record, the band collaborated with the artist Hozier singing backing vocals in his live band and toured as his opening act. Along with their first Headline Tour, the band has received significant radio play in Ireland.

They recently released their new single. Entitled ‘Crawl’ the single is featured on their critically acclaimed 2018 album which was released last February.

Wyvern Lingo describes themselves as “…three individuals whose lives are inextricably linked. We know each other inside and out and can’t lie or fake it in front of each other, so our lyrics are awash with honesty.”

Originally inspired by the work of the likes of Thin Lizzy, Led Zeppelin, Joni Mitchell and Simon & Garfunkel; the band then starting their own thread of music, which stitches together a rough but resilient tapestry of influences, taking in folk, hip-hop, rock and R’n’B, all  united by the spectral chill triggered by their unique vocal harmonies.

The trio self-released their first EP – “The Widow Knows” in 2014, which brought them to the attention of Irish independent label Rubyworks. Extensive international touring followed with James Vincent McMorrow and fellow-Bray native Hozier, and a second EP – “Letter to Willow”, followed in 2016.

According to the Irish Times, their “eponymous debut album goes even further down that experimental rabbit hole,” from their earlier demos and work with Hozier.

Thin Air, the global music and culture forum, highlighted their musical style on their first album as such: “This transition through the stages of heartbreak across the album presents us with a question surrounding the transience of sadness. The sound of the album works alongside the development of this theme”.

Speaking after this morning’s announcement Neil Dolan said: “Limerick is extremely lucky to be graced with the unique style of Wyvern Lingo this year. We will see them support Walking on Cars in July but their stand-alone Warehouse gig in September really should prove to be something special”.