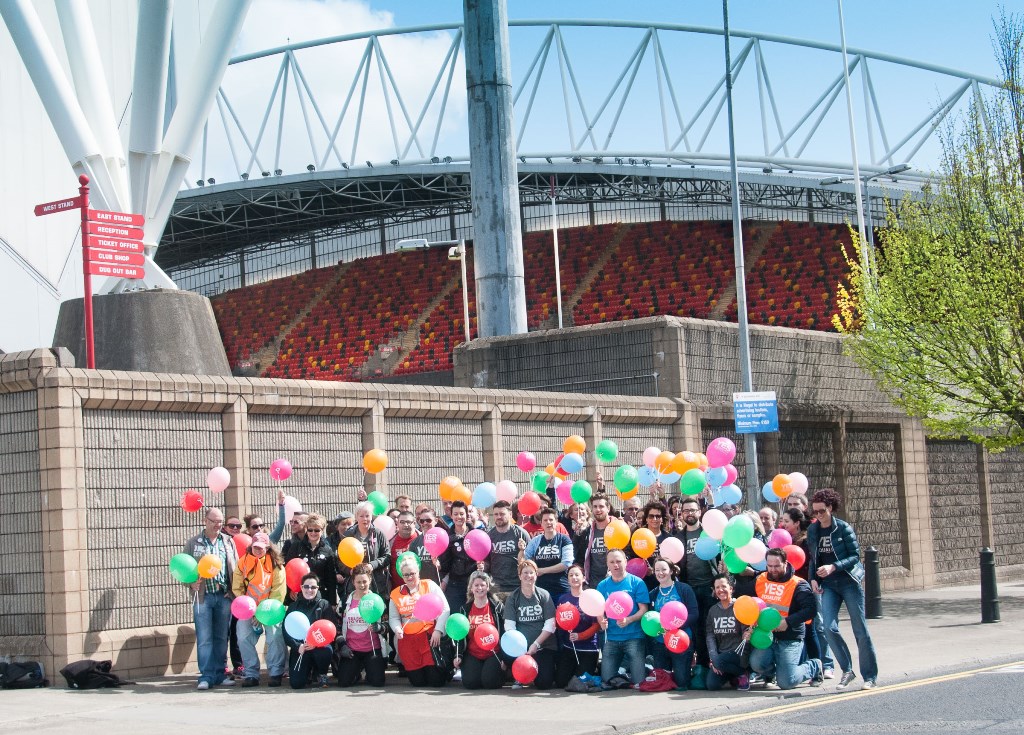 Limerick took part in Ireland’s national canvas day for the Marriage Equality Referendum on Sunday 17 May. People from Limerick flocked to the streets and doorsteps to ask their neighbours, friends and community to vote Yes on May 22.

The Yes Equality Limerick canvas was part of a national canvas day which saw 10,000 people speak to hundreds of thousands of people in every city, town and village of Ireland.

Jennifer Hannon, Yes Equality Limerick said, “Every evening, local volunteers are canvassing houses all over Limerick. The mass canvas seeks to remind people that their yes vote matters on May 22.”

“On the doorsteps, people want to know why civil partnership isn’t enough and why are we asking for civil marriage. We explain that only a couple in a civil marriage are viewed as family and receive constitutional protections. In other words civil partnership can be changed or removed by a future government if they so wish, marriage because it is protected by the constitution cannot be changed without a referendum.”

“We also get asked about the impact of the referendum on children. Once we explain to people that Ireland’s leading children’s organisations ISPCC and Barnardos are calling for a Yes vote because it will actually help and support children, people understand that voting Yes is in the best interest of children. The referendum is about civil marriage. The law of the land provides for guardianship, custody and adoption and follows the best interests of each individual child. The outcome of the referendum will not change that law.

The referendum is not about adoption or about surrogacy – these are clearly important issues and ones that people care about deeply but they are complex issues which are dealt with in legislation, or planned for, and are not part of this referendum.

The Children and Family Relationship Act has been signed in to law and will not be changed by the referendum.

“We encourage everyone in Limerick to consider the referendum issues carefully and to contact us if they have any doubts and wish to continue the conversation. We ask all the people of Limerick to support their family, friends and community by voting yes to ensure all people can marry the person they love and are treated equally by the State.”