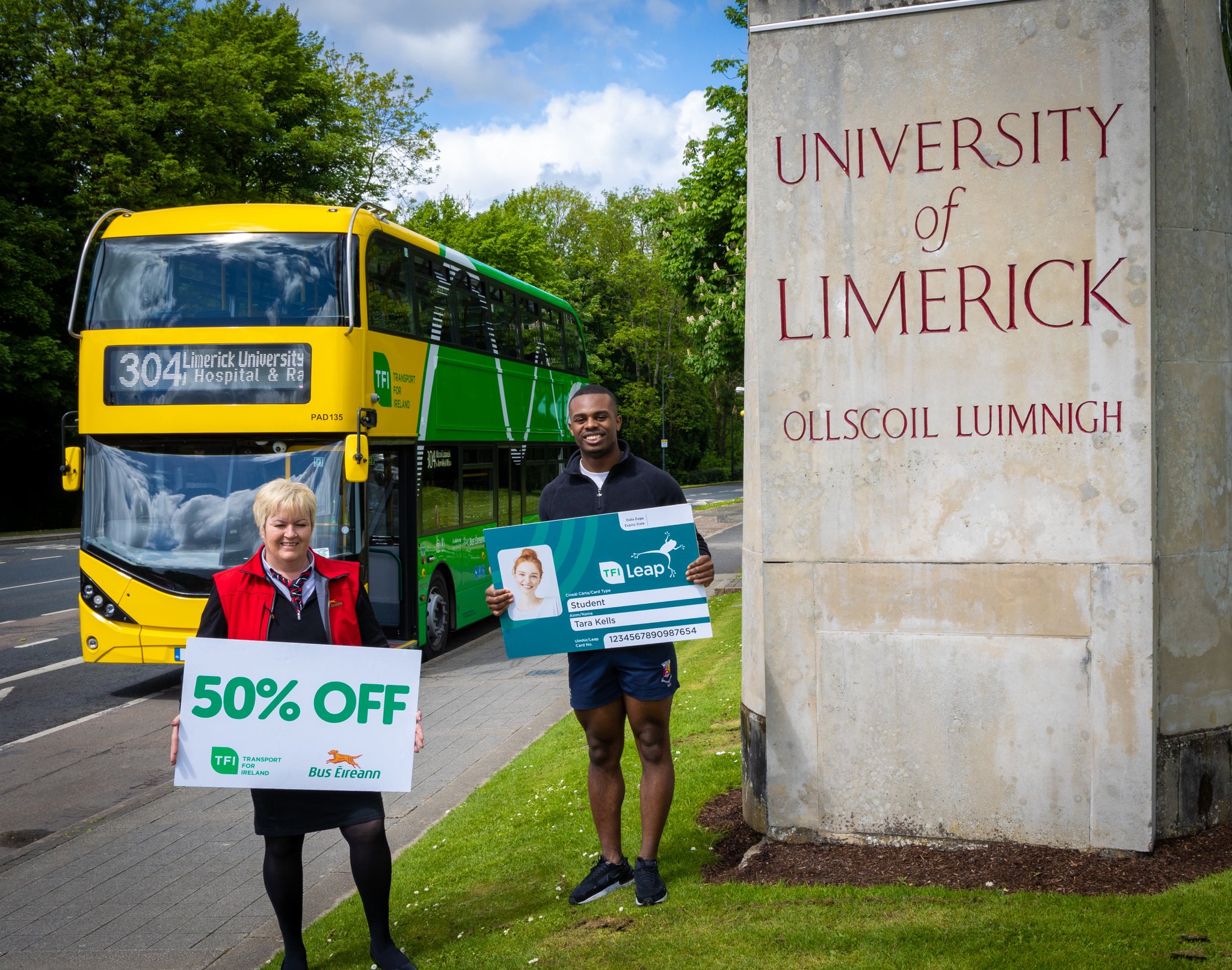 Bus Éireann is urging Limerick based passengers aged between 19 and 24 to register for the Transport for Ireland Young Adult Leap card and avail of 50% fare reduction saving c.€400 on their travel costs by the end of this year

Bus Éireann, Ireland’s national bus company, is urging young people aged from 19 to 24 in Limerick to register for the new Young Adult Leap Card to avail of annual savings of hundreds to thousands of euro annually on their travel costs.

Half price travel on public transport for young people up to their 24th birthday – one of the measures announced in Budget 2022 – follows the introduction of a 20% fare reduction for all passengers on Bus Éireann’s PSO routes. Implemented by Bus Éireann, the measure was introduced by the Department of Transport and supported by the National Transport Authority.

This measure means city fares are now back to 2007 levels and regional fares to those of 20 years ago. It is the biggest across-the-board discount in fares since 1946, according to Bus Éireann.

Bus Éireann’s fare reductions means that a student travelling from Shannon Airport to Limerick twice a day for college using the new Young Adult Leap Card can save €61 a week, compared to travelling on a single ticket, paid in cash, with the price of their ticket falling from €8.50 to €2.38.That’s a saving of €1,836 a year or €5,500 over the course of a three-year college degree.

These measures come as the CSO has reported that annual inflation in Ireland continues to increase, and grew to 7.3% in April, with the cost of diesel and petrol at record highs.

With 62% of Bus Éireann passengers using services on at least a weekly or daily basis, the fare reduction means passengers will make tangible and sustained savings now when travelling by bus.

With bus and coach transportation emitting just a fraction of the amount of carbon dioxide per passenger kilometre, these fare reductions mean customers can lower their carbon footprint while saving money.

According to the recent socio-economic impact report, commissioned by Bus Éireann and carried out by KPMG, the company contributes €23 million directly and indirectly to the local economy as a result of its operations. Bus Éireann employs 154 people in Limerick.

Stephen Kent, Chief Executive of Bus Éireann, said, “Passengers travelling on our nationwide network of regional city, town, rural, and local services – including our Limerick services – are now paying 20% less – while those aged up to 24 can save a further 50% using the Child, Student or Young Adult Leap Card. This move, designed to provide savings and encourage greater use of public transport, will serve to reduce carbon emissions also, as required under the Government’s climate action plan.

We urge all customers aged between 19 and 24 to register for the new Young Adult Leap Card and save more than 70% on their travel costs, while making sustainable travel choices and working together to reduce our carbon footprint and energy consumption.”

Nesta Nyamakazi, student at the University of Limerick, said, “With this new incentive that Bus Éireann has brought in, I will definitely use the bus more often as it’s more efficient, less time consuming than driving and a cheaper alternative.”

Young Adult Leap Card can be applied for online HERE