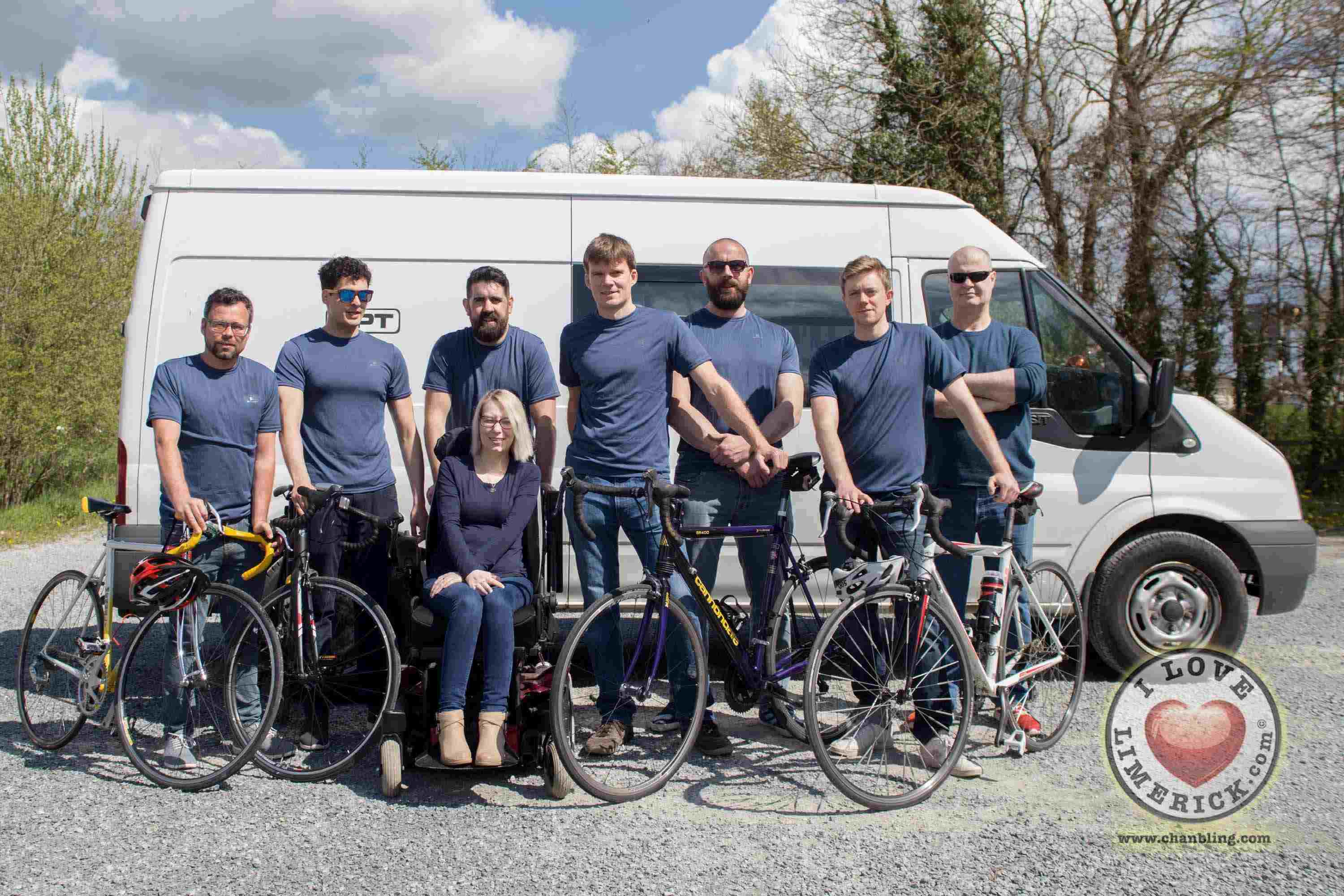 Zondra Meaney pictured with members of the cycling team who will take part in the Zondra Meaney Malin to Mizen Head cycle. Picture: Cian Reinhardt/ilovelimerick

Local Limerick mother, Zondra Meaney has been fundraising with the hope that she will raise €100,000 to undergo major neurosurgery in Spain as a result of an exceptionally rare disease called Ehlers Danlos Syndrome (EDS).

Zondra’s boyfriend Diarmuid Hartigan (Steele), her brothers Ryan and Jonathan, and friends will cycle from Malin to Mizen Head to raise funds for Zondra’s surgery.

Telling us f the Zondra Meaney Malin to Mizen Head cycle, Diarmuid tells us “We felt we needed to do something big to raise awareness as Zondra’s condition is so unrecognized in Ireland. We were always thinking that we would go the extra mile to make Zondra better so what better than cycling loads of miles from the top of the country to the bottom.”

EDS is a rare connective tissue disorder which occurs in approximately 1 in 5,000 people. The condition can affect every system in the body leading to a wide range of apparently unconnected symptoms including joint pain and hypermobility, chronic fatigue, gastrointestinal issues and heart complications so Zondra’s everyday life has been impacted hugely. 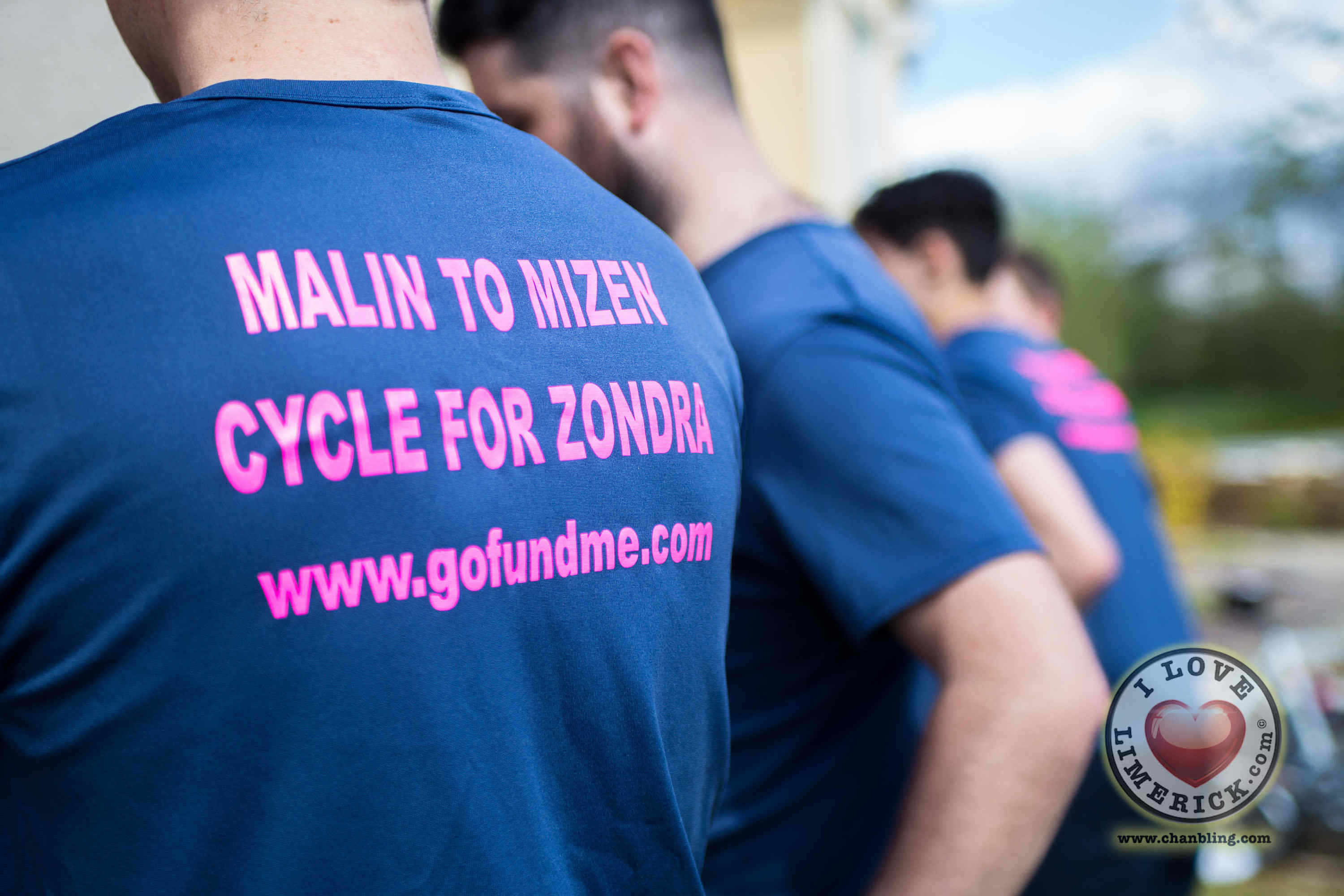 Zondra explains, “For me, EDS affects all of me, from my joints, tendons, ligaments, bowel and blood vessels, to my skin. EDS is comprised of rare, usually inherited, genetic conditions that drastically affect connective tissue – the so-called ‘building blocks’ of the body. EDS has affected my whole body, as the disease affects your connective tissues.”

When speaking to Zondra about the cycle she told us “Last year when my boyfriend turned to me and said he was going to cycle the length of the country to raise funds for me I thought he was mad. Like I just laughed at him and laughed him off. But when he wants something he will do it and I never doubted that.” She tells us “He has roped in some more crazy heads along the way to join him in this enormous cycle including my brothers Jonathan and Ryan, his cousin William and friends. Jonathan is coming all the way from Spain to cycle with his friend James.”

‘Tunes for Zondra’ finale party will take place on Saturday, May 5 in Pharmacia from 5 pm to celebrate the Zondra Meaney Malin to Mizen Head cycle. DJs playing include A2daF, Malty Walsh, Jim Lawless, Cian Frawley, Eoin Greaney, Phil Wade, Tom Frawley, Sean McGrath, Pippy, Johnny Meaney, which Diarmuid says have all been a huge help and have ‘all offered their services for free’.

Everyone involved is very grateful of the support they have received. Diarmuid tells us that “people have been excellent in their support of this fundraiser from Joe in the bike shop on O’Connell avenue giving us spares to GPT hire on the Ballysimon Road giving us a free van for the week.”

Zondra says “What the lads are all about to undertake is truly amazing and a testament to their willpower and determination. I’m sure it will be a hell of a journey with lots of laughs on the way. Thank you to Diarmuid for being crazy enough to bring this all together. I’ve no doubt in my mind you’ll do this.”