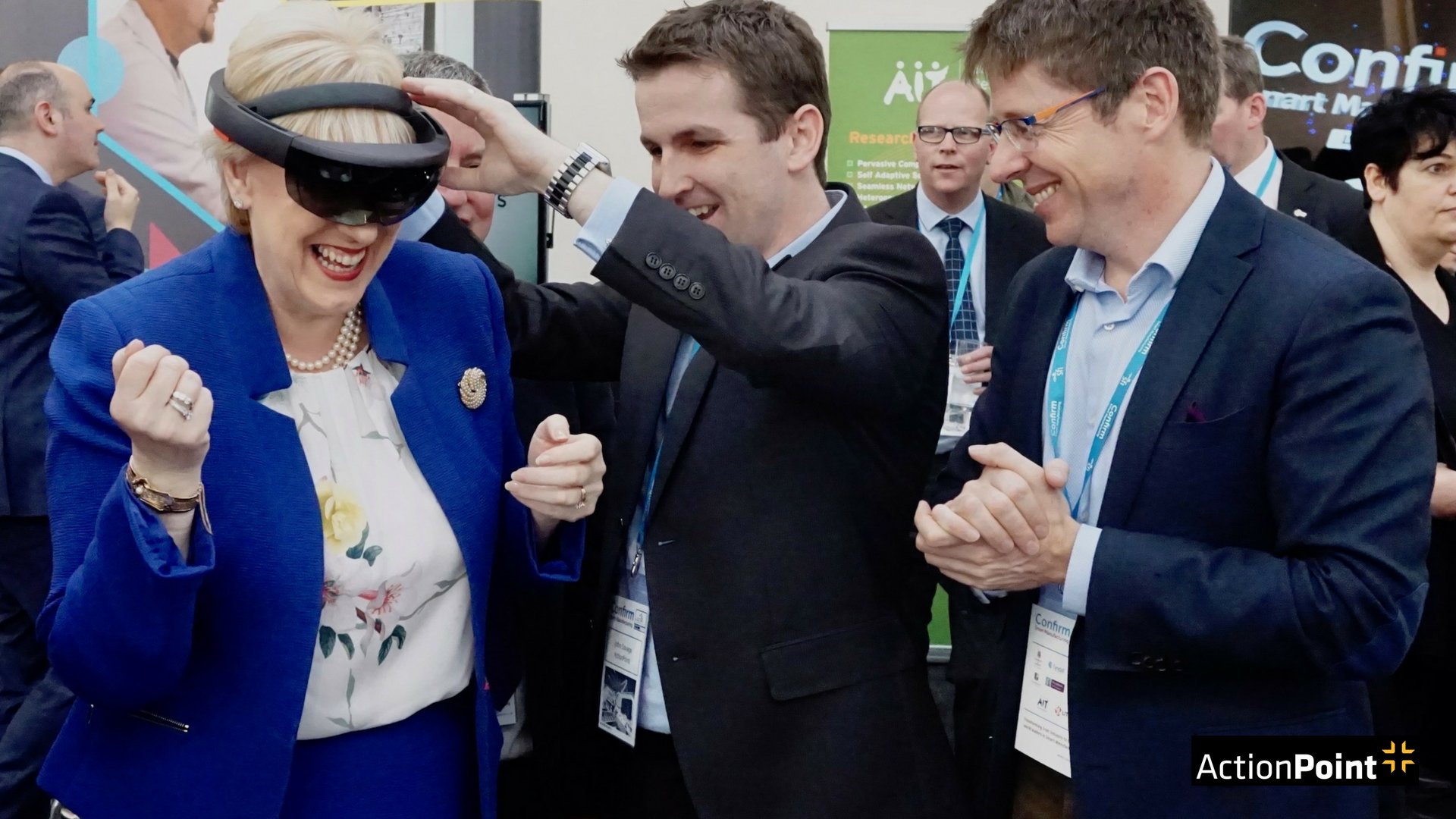 Limerick based technology firm ActionPoint, which employs over 80 staff in the Midwest was given pride of place at CONFIRM, the Smart Manufacturing hub newly launched by the University of Limerick, with support from Science Foundation Ireland. The center was opened on Wednesday by Ireland’s Minister for Business, Enterprise, and innovation, Heather Humphreys TD.

ActionPoint showcased a number of leading commercial applications, including demonstrations of the Augmented and Mixed Reality headset HoloLens and ActionPoint’s most recent collaboration, a Predictive Maintenance solution IoT-PREDICT.

The HoloLens used to demonstrate Smart Manufacturing applications, allowing attendees to visualise manufacturing components in real time through the headset. HoloLens, which is produced by Microsoft, is the world’s first self-contained holographic computer. It is a practical tool for those looking to explore augmented and mixed reality within the business.

HoloLens captures the essence of ‘Digital Twinning’, a term used to describe the replication of a physical environment in a digital world. ActionPoint is in prime position to lead this ‘Digital Twinning’ concept as they are Ireland’s first Microsoft HoloLens partner and one of Ireland’s fastest growing technology companies.

Speaking at the showcase, ActionPoint’s Head of IoT Ivan O’Connor said, “Manufacturing faces some major challenges, fluctuating oil prices, a skilled labour shortage and changing regulation. Ultimately efficiency and technological gains can remedy many of these challenges. What ActionPoint has been doing with IoT-PREDICT and HoloLens is reduce downtime and improve operational efficiencies through safer storage and visualisation of data. These insights help manufacturing executives and plant managers to better understand their operation, informing better decisions and driving faster progress.”

According to PWC, Smart Manufacturing is worth an estimated $493 bn p.a with Confirm aiming to create a world-class hub in Ireland to take advantage of this global opportunity.

Confirm is part of the Science Foundation Ireland group and its vision is to “fundamentally transform the industry into a Smart Manufacturing Ecosystem” with a focus on Ireland. The Park Point facility will be one of 8 research centers nationwide and the second in Limerick. Confirm has 47 million euro in funding and is supported by 42 national and international industry partners.

Related Topics:Action Point
Up Next

Miss Limerick 2018 competition at the Clayton Hotel this May