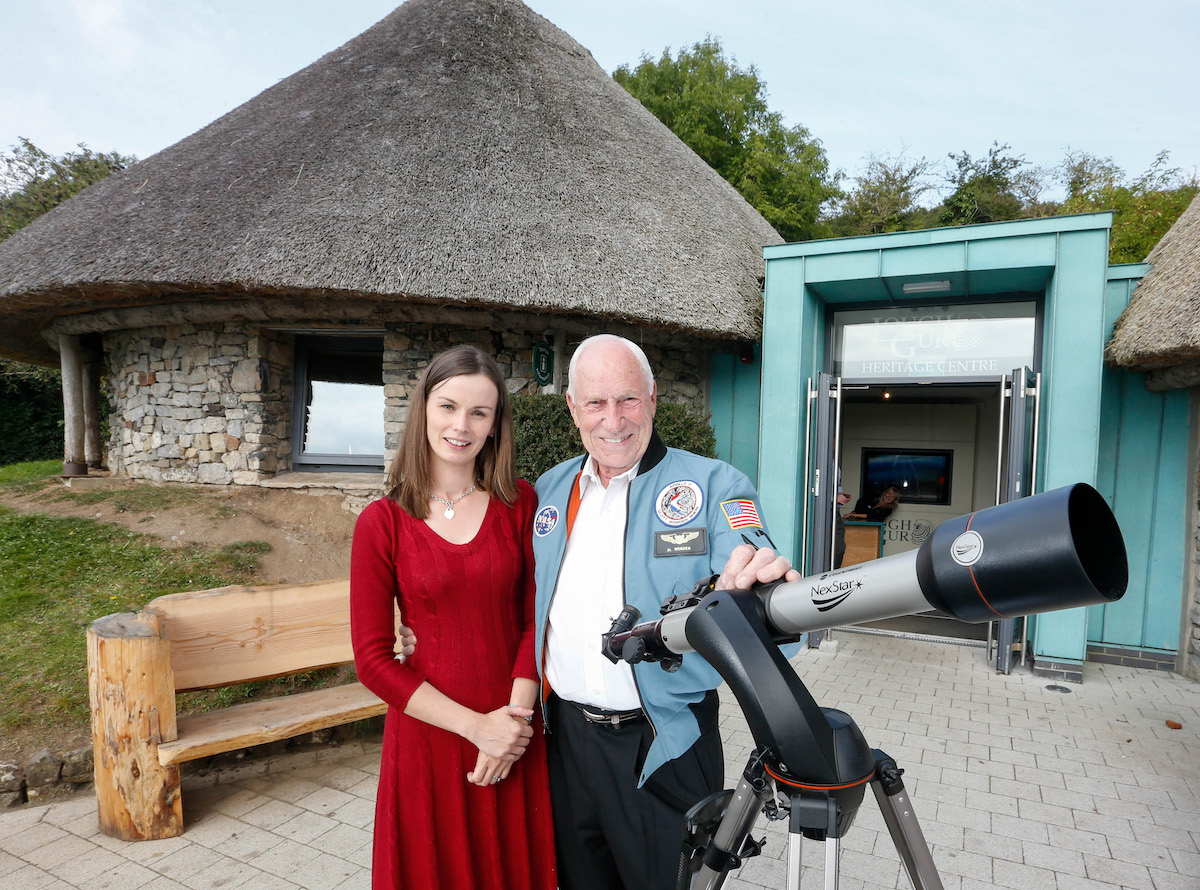 On Wednesday, March 18, Apollo 15 astronaut Al Worden passed away. He was a patron of Lough Gur, helping with its development to make it a significant landmark.

“Anything is possible” – words by Al Worden, Patron of Lough Gur & Apollo 15 astronaut after his flight to the Moon in 1971. These words now more than ever ring true. In this sense, they refer to the heights that people can achieve if they put their minds to it. Together the crew of Apollo 15 worked to overcome all odds to become the most scientific mission with crew members becoming the first people to drive on the moon.

Al remains the Guinness Book of World record holder for being the furthest from Earth retaining the title as the most isolated person in the Universe, a state of being that many can now begin to comprehend. Not satisfied with just one world record, Al also holds the record for completing the first deep-space EVA.

It was the great-great-grandson of a Lough Gur native (JFK), who launched the human space race, by choosing to put a man on the moon. One such man to take up President Kennedy’s call to action was Al Worden.

Some 45 years after his historic flight to the moon, Al Worden, Astronaut and Patron to Lough Gur, returned to close this circle of history. He visited Lough Gur on three occasions (2014,2015 & 2016) to help Lough Gur Development fundraise for initiatives connected with promoting and preserving Lough Gur as a site of international significance.

Speaking about his journey’s importance, an extract from Al’s book “Falling to Earth” reads, “Someday, all of us who journeyed to the Moon will be gone. Take a walk, look up at the Moon and think of us. A part of us is still there and always will be.”

Al Worden passed away on Wednesday, March 18, 2020 at 88 years of age. As one of only 24 people to have flown to the moon, Al formed part of an exclusive voyager’s club.

Al’s love affair with Lough Gur began in 2014 when he was introduced to the community group in 2014 by Senior Director of WP Engine Paul Ryan and Cllr. Brigid Teefy. They suggested that he would appreciate a visit to Lough Gur and from the moment he arrived Al was hooked.

As the only Apollo Astronaut to visit Limerick, Patron of Lough Gur Al Worden will be remembered locally as a good, kind and generous person who marveled at the extreme beauty of Lough Gur, believed in its value as a recreational area for Limerick citizens and the areas potential to put Limerick firmly on the map.

The link between ancient monuments and astronomy was of a particular area of interest to Al who believed that “we all need to take time to look up at the stars and appreciate what we have”.

Kate Harrold, Manager of Lough Gur commented, “During his visits to Lough Gur Al was always down to Earth. He contributed in many inspirational ways to help propel a local community forward in their efforts to care for Lough Gur. I remember his mix of intellectual brilliance, ability to enjoy a good night out and make the most of life overall.